In the mid-2000s, accomplished SUPER GT team boss Misato Haga came close to her dream of running a team in Formula 1. But the frustration of that missed chance serves as fuel for her new challenge on the Japanese motorsport scene.

Female team bosses remain few and far between in most motorsport series worldwide, and even rarer are those that can say they have led a team to championship glory. Japan’s Misato Haga is among that select group.

Fifteen years ago, she was at the helm of the Direxiv squad in SUPER GT’s GT300 class when the team was forced to withdraw halfway through the season while it was leading the championship.

In 2008, she led the Nissan-backed MOLA team to the GT300 title, before disappearing from motorsport for more than a decade. But now she’s back, having returned to SUPER GT to head up the Drago Corse Honda operation on behalf of new title sponsor Yogibo.

Haga’s story is a fascinating one, as she was handed the huge responsibility of running the Direxiv operation at the relatively young age of 26. And the company’s involvement stretched far beyond SUPER GT, sponsoring numerous GP2 drivers and then coming close to securing a Formula 1 entry with the backing of no less an organisation than McLaren.

Unfortunately, Haga’s ambitions of running a grand prix team were dashed as Direxiv was beaten by Prodrive to what was the 12th and final spot on the 2008 grid. And that had the knock-on effect of bringing the Direxiv SUPER GT project to a premature end.

It’s clear the frustration of that experience is partly what drives Haga even today, 15 years on from those events.

“With Direxiv, we had to quit halfway through the season in 2006 because the sponsor withdrew, and we were leading the championship at that point,” recalls Haga in conversation with Motorsport.com. “That was extremely frustrating and since then that feeling has stayed with me. My mind was made up that one day I would return for revenge.” 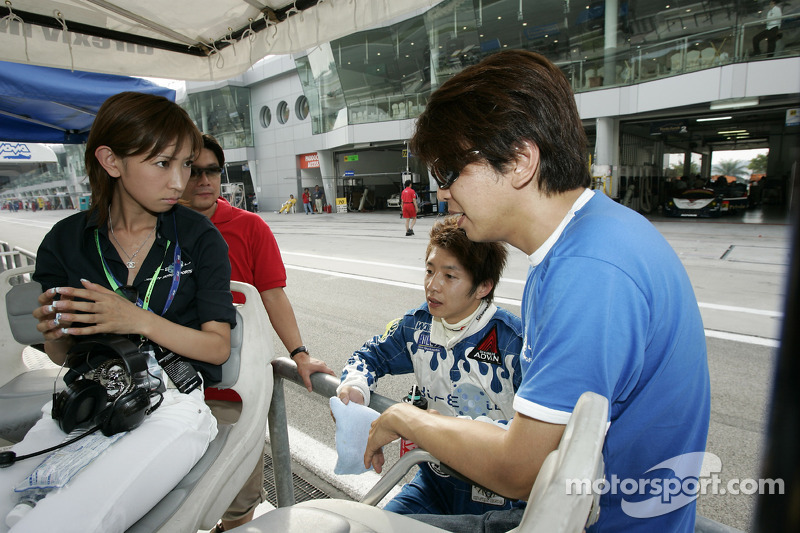 Like many women working in the SUPER GT paddock today, Haga began her career as a ‘race queen’, but it was after she started her own company to recruit sponsors that she came into contact with the mysterious investors behind Direxiv, formed in 2004 ostensibly as a vehicle for Japanese luxury goods and services companies to gain exposure in motorsport.

In 2005, Direxiv Motorsport was launched with Haga at the helm, sponsoring several drivers in GP2 – Olivier Pla, Clivio Piccione and Hiroki Yoshimoto – and joining forces with R&D Sport to field a Vemac 320R in SUPER GT.

That season ended with a best finish of fifth with drivers Shogo Mitsuyama and Yasuo Miyagawa, but in the second year of its collaboration with the R&D Sport squad (which now runs the works Subaru programme), results improved markedly. Mitsuyama and new teammate Nobuteru Taniguchi won at Okayama to launch themselves into title contention.

At the same time, Direxiv’s footprint in Europe was growing quickly. After a season sponsoring drivers in three different teams, the organisation entered into a full-blown alliance with David Price Racing, which became known as ‘DPR Direxiv’, signed Jean Alesi as its executive director and hired Alexander Wurz to head up its young driver programme.

But even more significant was its deal to play a role in McLaren’s young driver programme, which meant backing then-GP2 star Lewis Hamilton at ART Grand Prix. By this stage, plans were progressing for DPR to operate a McLaren B-team under the Direxiv banner with Alesi as the team boss, using the Woking team organisation’s old factory. 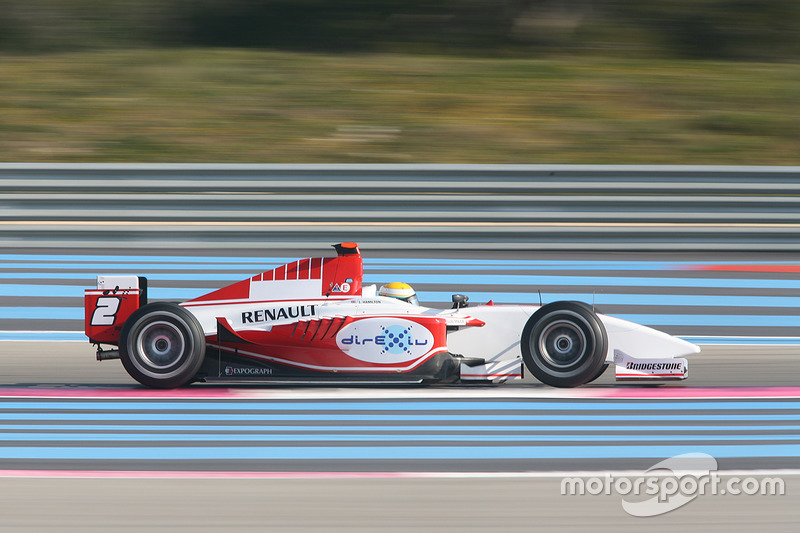 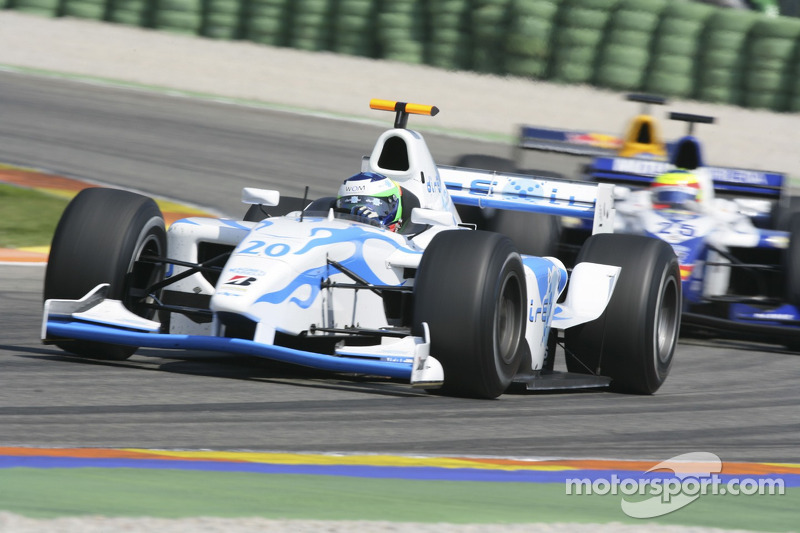 That resulted in an application being lodged to the FIA for a grid slot in 2008, but it was David Richards’ Prodrive organisation that ultimately got the nod – essentially spelling the death knell for Direxiv’s involvement in motorsport.

Haga admits: “Once it was clear we could not go into F1, the investors lost interest, including in SUPER GT, and everything unravelled quite quickly.

“Everything was set [with McLaren] and we applied, but we were rejected by the FIA, and we weren’t told why. If we had been successful, Jean would have been the team boss and I probably would have been second-in-command.

“It was a special chance, a once-in-a-lifetime chance. I still want to return to that world, but that frustration motivates me for my present challenge, so I think it was a good experience.”

After the sudden collapse of the Direxiv project in the wake of the Suzuka 1000km in August 2006, Mitsuyama and Taniguchi were able to complete the season with R&D Sport, but two non-scores in the final two races dropped them down to third in the final standings.

Following that, Haga took over as team director for the Avanazza Bomex outfit (which likewise ran a Vemac) for the 2007 season, before being hired by NISMO to oversee the MOLA team’s title-winning run in 2008 with Kazuki Hoshino and Hironobu Yasuda. 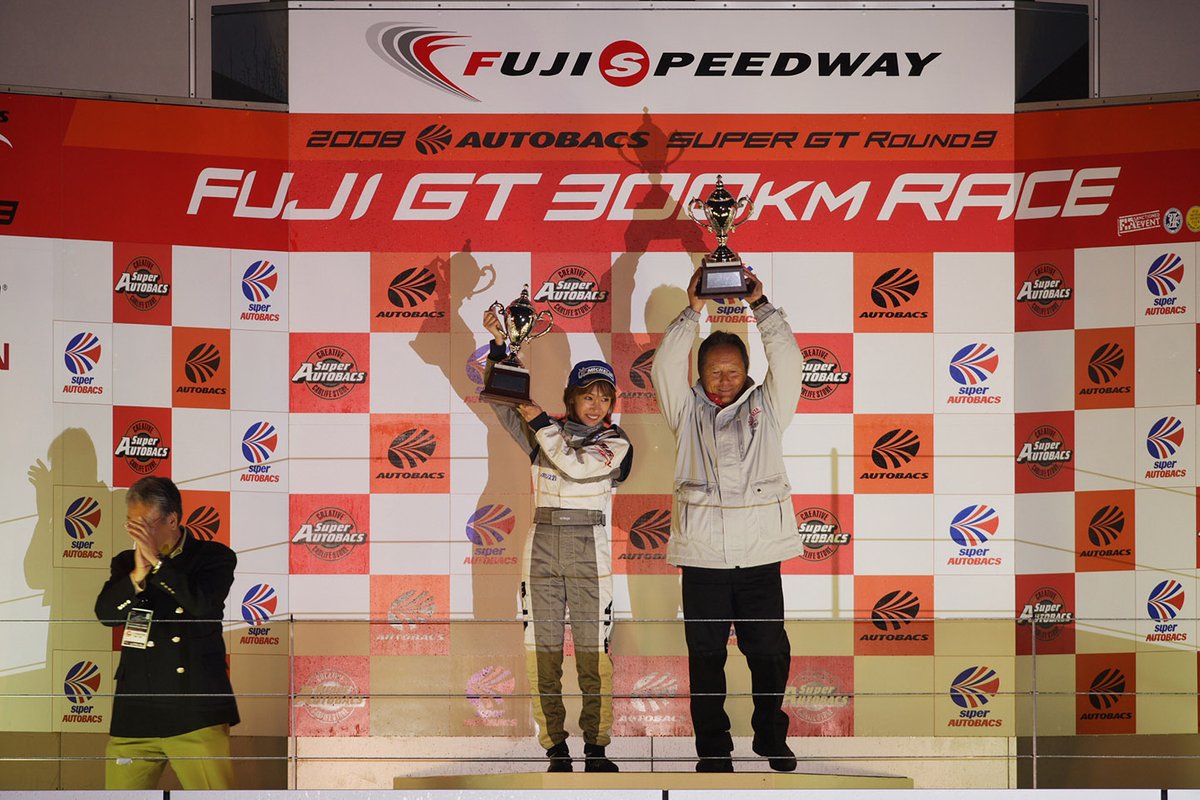 Then, as Haga says: “I achieved my goal of winning the championship, so I decided to leave motorsports for a while. I’m interested in beauty, so I created a cosmetics company, and I was doing basically nothing related to motorsports for 12 years.”

That was until her PR work for WebShark, the company that distributes American sofa and cushion company Yogibo’s products in Japan, afforded her a chance to return to SUPER GT.

“The company’s boss said he was interested in joining the world of motorsport, and because I had experience, he asked me the best way of doing so,” recalls Haga. “I suggested SUPER GT because it is the most popular championship in Japan with the most spectators.

“I’d had offers to return [in the meantime], but in the world of motorsport there are a lot of projects that fall by the wayside. Most sponsors are unable to join because it’s become very serious and very professional, even in the GT300 class. You have to be highly committed.

“However, with WebShark and Yogibo, I felt they were committed to properly competing in SUPER GT, and that they wouldn’t suddenly give up, so I came back to motorsport with them.”

WebShark’s desire to get involved in SUPER GT came at the right time for Drago Corse, which needed a new sponsor to stay on the grid with its Honda NSX GT3 after previous backer Modulo withdrew at the end of 2020.

As well as Haga coming on board as team director, ex-Direxiv man Mitsuyama was brought back into the fold to partner Drago team owner/driver Ryo Michigami, while the team’s NSX was decked out in a recognisable sky-blue colour scheme in deference to its new backer.

So far, however, it’s been anything but plain sailing. After three races, Michigami and Mitsuyama have yet to score points, scoring a best finish so far 16th in the Okayama curtain-raiser. As Haga admits, the level in GT300 has gone up a lot since she was last involved in the championship, which came as an eye-opener when she first returned to the paddock. 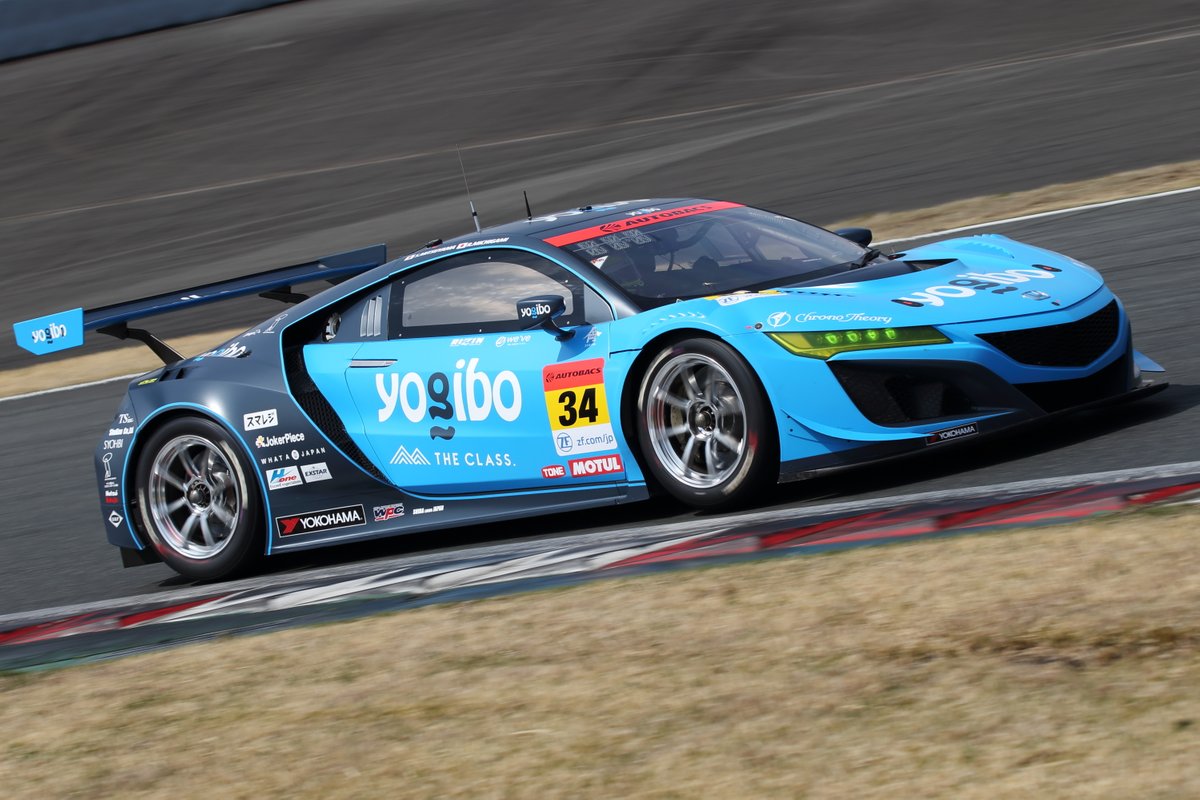 “In the old days, you could choose the chassis, the engine, the tyre, you could make a lot of different choices,” she says. “Now you have a full package to run and so things like the speed of the pitstops and strategy make the difference.

“With the NSX, my idea is not to rely so much on the team’s past data but to be more aggressive with the set-up. The engineers and mechanics in the team are mostly quite young, so we feel we want to take on a new challenge.”

Haga also feels the team has suffered on the tyre front, with Drago Corse running Yokohama rubber instead of the Bridgestone products as used by benchmark NSX GT3 squad ARTA.

“The difference between the different tyre manufacturers is very big,” she says. “And before the race weekend even starts, choosing the right tyre compound to bring to the track is critical. We are somewhat limited with the car and the tyres. Within those limitations the team is still working out what to do in order to make the best choices.”

Haga’s current position is also different to the more wide-ranging role she had in the past with Direxiv, where she was essentially the public face of the entire organisation, splitting her time between Japan and Europe. Now, she’s been installed at the helm of a team that’s well-established and has its own way of approaching things already.

“In the past I was the team representative and the manager, so I could do whatever I thought was best and do things my own way,” she explains. “Now we are working with Drago Corse, they have been campaigning the NSX for several years, and this is my first time in the paddock for more than 10 years, so there are a lot of challenges to overcome.

“But I don’t see it as a negative. I’m having to study a lot, so I feel like it’s doing me good and it’s a good learning experience. That said, I came back not to make up the numbers but to win the championship again, and everyone in the team is working to achieve that goal.”

Whether WebShark continues its alliance with Drago Corse or pursues a different path in search of SUPER GT glory in the years to come remains to be seen. But what is clear is Haga’s determination to do what she couldn’t do with Direxiv all those years ago, so don’t bet against a baby blue Yogibo-coloured car fighting at the front of the GT300 field soon. 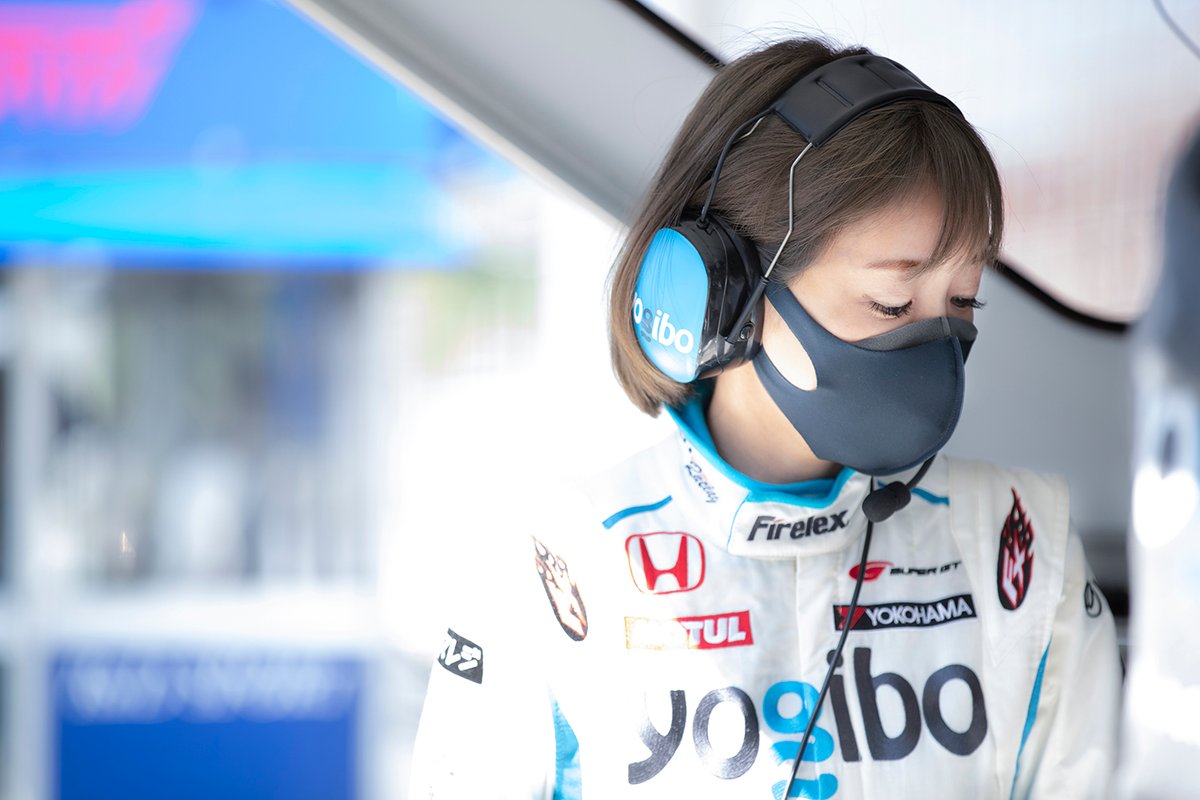 Is a SUPER GT car now faster than a WEC hypercar?