Miyata "happy to be frustrated" with Motegi SUPER GT defeat

Miyata and his teammate in the #19 Bandoh Toyota GR Supra, Yuji Kunimoto, enjoyed the team's most competitive showing in some time, qualifying second and battling the Kunimitsu Honda of Yamamoto and Tadasuke Makino throughout the race in the searing heat.

Kunimoto made an early pass on Makino to lead for most of his stint, but the pendulum swung back towards the Honda in the pitstop phase, as the Kunimitsu crew regained the advantage by making an earlier and faster stop.

Miyata was aboard the #19 car for the second stint and rapidly closed in on Yamamoto's Honda, but spent the rest of the race unable to find a way by.

But despite missing out on the chance to score Bandoh's first win for five years, Miyata - whose previous best result in the GT500 class was seventh - said he could still take some satisfaction from the team's performance.

"If I had to say whether I feel happy or frustrated to finish second, I would say frustrated, but I think I’m happy to be frustrated," Miyata told the official SUPER GT website.

"That’s because up to now we have only been fighting for the lower reaches of the points, so more than being frustrating we were simply wondering what we needed to do, so in that sense I’m grateful to have made it this far.

"During the pitstops we were undercut and lost about five seconds, and after that I was able to catch up [to Yamamoto]. I was able to get within attacking range and I set fastest lap, but I was about two steps short.

"Both the team and the tyre manufacturer [Yokohama] have worked hard to improve the car and the tyres, so I'm grateful to them and I'd like to keep fighting without forgetting their support."

For his part, Yamamoto admitted that he expected the high temperatures at Motegi to benefit the Yokohama-shod Bandoh Toyota over the Bridgestone tyres used by Kunimitsu. 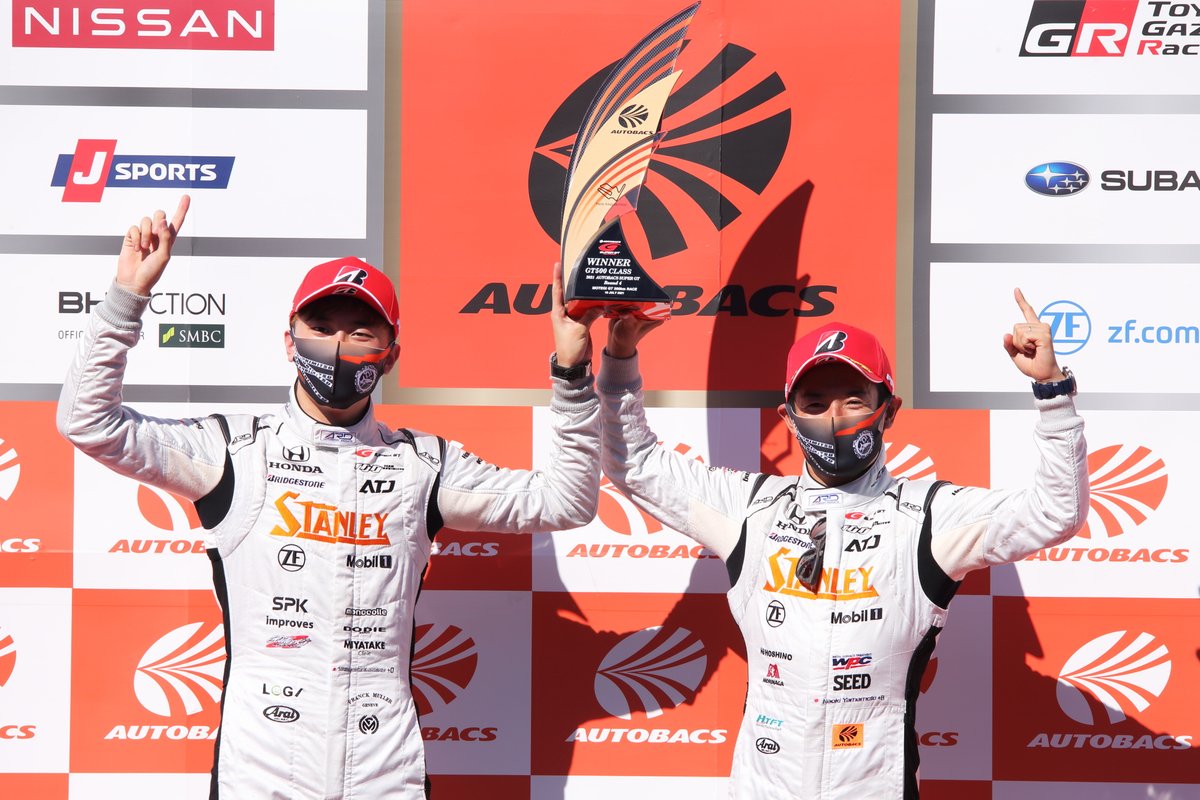 The two-time champion revealed that instead of pushing flat-out to keep clear of Miyata, he deliberately allowed the Toyota to close in a bid to cause his rival to overheat his tyres.

"Looking at the first stint when Makino was driving, because the road surface temperature was almost 50 degrees, I knew the Yokohama cars would suddenly be fast," said Yamamoto. "If everything went normally, I didn’t think we could beat the #19.

"One of the main factors for this win was that while Makino was able to claw back [some of the lead gap] in a difficult situation, the #19 made a mistake in the pits, and I was able to leave the pits ahead.

"After that the #19 soon caught up with me, but if I knew if I tried too hard I could easily be passed, so instead I dropped my pace, allowed [Miyata] to close, knowing that they would lose downforce and overheat the tyres, making their life more difficult."

Yamamoto also conceded that two full-course yellow periods during his stint were "significant" in determining the outcome.

"When the tyre pressures and temperature increased, we couldn’t increase our pace, but when it was becoming tough the FCY helped us out and we could cool the tyres," he explained.

Yamamoto has closed to within three points of championship leaders Kenta Yamashita and Kazuya Oshima, who failed to score at Motegi in their heavily-ballasted Rookie Racing Toyota.

NASCAR Clash at the L.A. Coliseum: Entry list, how to watch, schedule & more