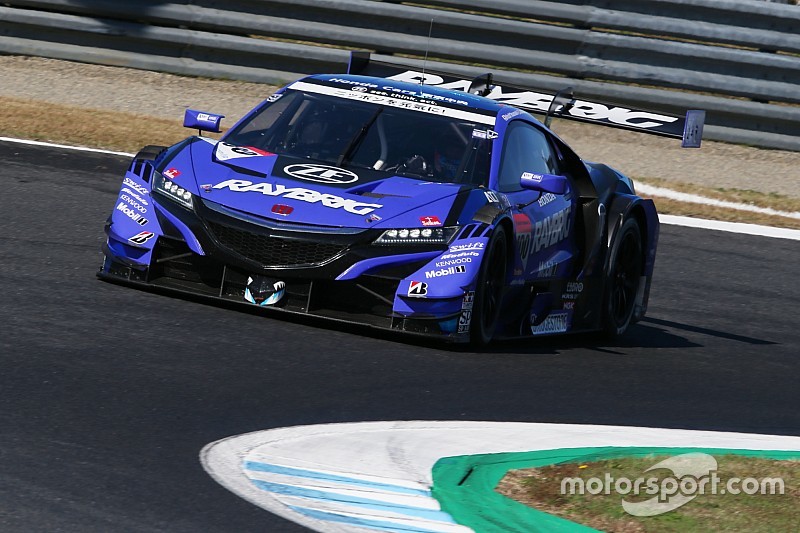 Jenson Button and Naoki Yamamoto secured the Super GT title in a tense Motegi finale, as ex-Formula 1 champion Button resisted a determined charge by Ryo Hirakawa in the closing stages.

Kunimitsu Honda pair Button and Yamamoto had to finish ahead of the #1 TOM'S Lexus LC500 shared by Hirakawa and Nick Cassidy to win the title, and did so by taking third place, just 1.5 seconds ahead of their main rivals.

It marks Honda's first Super GT title since 2010, with Button becoming the first rookie to win the championship since Toranosuke Takagi achieved the feat in 2005.

Yamamoto, who won the Super Formula title last month at Suzuka, also becomes the first driver to complete a clean sweep of titles in Japan's two most prestigious series since Richard Lyons in 2004.

The race was won by ARTA Honda pair Takuya Izawa and Tomoki Nojiri from pole, with Cerumo Lexus pair Hiroaki Ishiura and Yuji Tachikawa finishing second, 1.8s down at the finish.

How the race unfolded

Izawa led away at the start from pole as Yamamoto held second, while Cassidy made up one place on the opening lap to move into fifth behind Bertrand Baguette in the #64 Nakajima Honda and Tachikawa's #38 Cerumo Lexus.

That was how the order remained at the front until Izawa pitted the #8 NSX-GT from the lead to hand over to Nojiri on lap 19 of 53, at which point Yamamoto assumed control of the race.

Cassidy took second as Baguette and Tachikawa pitted to hand over to respective teammates Kosuke Matsuura and Ishiura, and both Cassidy and race leader Yamamoto hit pit lane together at the end of lap 29.

Button, taking over from Yamamoto, filtered back into fourth place, albeit quickly picking off Matsuura.

But the Englishman was unable to find a way by Ishiura, who did Lexus stablemates Cassidy and Hirakawa a huge favour by holding off Button's #100 NSX-GT for several laps.

In that time, Hirakawa was able to climb from eighth up to fourth, brusquely passing a fading Matsuura, and quickly set about closing the seven-second gap between himself and Button ahead.

Within three laps, he had cut the deficit to less than two seconds, and with five laps to go he was right on Button's tail.

The gap between Button and Hirakawa ebbed and flowed as the pair negotiated slower GT300 traffic, but Button was able to score a decisive break on the penultimate lap and begin the final tour with 1.5s in hand.

That was enough for him to bring home the #100 Honda ahead of the #1 Lexus by the same margin and secure the title.

Six seconds ahead, Nojiri was able to manage his advantage over Ishiura's Lexus to claim a second victory of the season for himself and ARTA Honda teammate Izawa.

Completing the top five was the #19 WedsSport Lexus shared by Yuji Kunimoto and Kenta Yamashita, ahead of the #6 Team LeMans Lexus of Kazuya Oshima and Felix Rosenqvist.

Nissan's top finisher was the #23 NISMO GT-R of Tsugio Matsuda and Ronnie Quintarelli in seventh.

Baguette and Matsuura ended up down in 12th after the latter was hit from behind by the #38 TOM'S Lexus of outside title contender Yuki Sekiguchi.

Izawa and Nojiri's victory moved them up to third in the final points ahead of Sekiguchi, who failed to score in 13th.

An open GT300 class title fight was won by LEON Racing Mercedes pair Haruki Kurosawa and Naoya Gamou, who took advantage of misfortune for Lamborghini to take their first class win of the season.

Marco Mapelli had opened up a commanding lead of 13 seconds in the #88 JLOC Lamborghini Huracan GT3 in the opening part of the race before the Italian suffered a right-rear puncture.

Shortly after Mapelli pitted for repairs and to hand over to teammate Kazuki Hiramine, the #88 car suffered another puncture, this time the rear-left, effectively ending its race.

Kurosawa fell from second on the grid to fifth at the start, but he and Gamou worked their way back into contention in the #65 Mercedes-AMG GT3 after not changing tyres during the pitstop.

Gamou inherited a seven-second lead and held on to win by 2.4s ahead of the #31 Toyota Prius of Koki Saga and Kohei Hirate, he and Kurosawa taking the title from pre-race points leaders Shinichi Takagi and Sean Walkinshaw.

From 10th on the grid, Takagi was not able to make enough progress to trouble the leaders in the first stint, with Walkinshaw eventually bringing home the #55 ARTA BMW M6 GT3 in ninth.