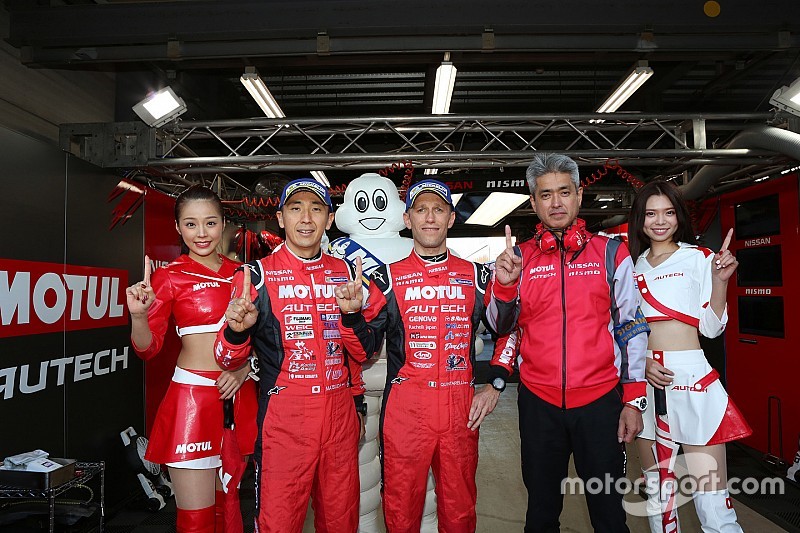 The factory Nissan duo of Ronnie Quintarelli and Tsugio Matsuda topped the qualifying session for the Super GT season finale at Motegi, beating their nearest championship rivals by nearly a second in the #23 GT-R.

The #17 Real Racing was the first to set a timed lap in the session, before immediately being shadowed by the sister Honda of #100 Team Kunimitsu.

Real returned to the top again with a 1m43.840s, before times quickly tumbled during the final two minutes of the session.

However, nearly a minute after the chequered flag fell, Quintarelli blew away Oshima’s time with a lap of 1m36.316s to secure pole position.

It was Nissan’s first pole of the season and allows the Italian-Japanese duo to close within seven points of the points-leading #37 TOM’S duo of Nick Cassidy and Ryo Hirakawa, who qualified third.

The #46 Mola Nissan of Satoshi Motoyama and Katsumasa Chiyo qualified fourth, while Daiki Sasaki and Joao Paulo de Oliveira made it three Nissans in the top five in the #24 Kondo Racing car.

Team Kunimitsu’s Naoki Yamamoto and Takuya Izawa were Honda’s top qualifiers in sixth, ahead of the second TOM’S car of Kazuki Nakajima and James Rossiter.

After leading much of the first half of Q2, Real ended at the bottom of the timesheets, with Takashi Kogure (who shares the #17 Honda with Koudai Tsukakoshi) setting a flyer only good enough for eighth.

While the #23 Nissan claimed pole by nearly a second, the remainder of the Q2 field was separated by only seven tenths.

Sean Walkinshaw and Shinichi Takagi qualified second in the #55 ARTA BMW, two tenths down on the pole time, while Haruki Kurosawa and Naoya Gamou were only 0.041s adrift in the #65 Mercedes.

Yuichi Nakayama and Sho Tsuboi, who sit second in the championship, could only qualify eighth in the #51 Lexus.