Nakajima Racing’s first SUPER GT pole in eight years does not come as a surprise according to two of the team’s former drivers now driving for rival Honda squads.

Takuya Izawa and Hiroki Otsu took the unfancied #64 NSX-GT, which is unique in the GT500 field in using Dunlop tyres, to a dominant pole in scorching temperatures at Suzuka.

Baguette, now with the Real Racing Honda team which uses Bridgestone tyres, said conditions at Suzuka on Saturday were similar to those at the Japanese Grand Prix venue when he and Matsuura took Dunlop’s only GT500 victory of the past decade.

“I know the Dunlop tyre behaves really well when it’s hot, especially at this track when it’s high-downforce with high load on the tyres,” Baguette told Motorsport.com.

“I am not surprised to see them at the front. I was trying to guess during the week who would be in front in qualifying, and I said the Dunlop car will be quick, and I was right!

“I’m not sure about their long-run pace, it might be cooler tomorrow so it may be more difficult for them. Our Bridgestone tyres are a lot more consistent and the operating window is a lot wider. But I am happy for them and they can be proud of this pole.”

Tadasuke Makino agreed with Baguette’s assessment, having used the Dunlop tyre at Nakajima last year, albeit finishing a lapped 11th alongside Narain Karthikeyan.

“Last year at Suzuka we were struggling, because the tyre temperature was too low,” said Makino, who joined the Bridgestone camp this year with his move to Team Kunimitsu. “But this year the temperature is much higher, so it’s not a big surprise.” 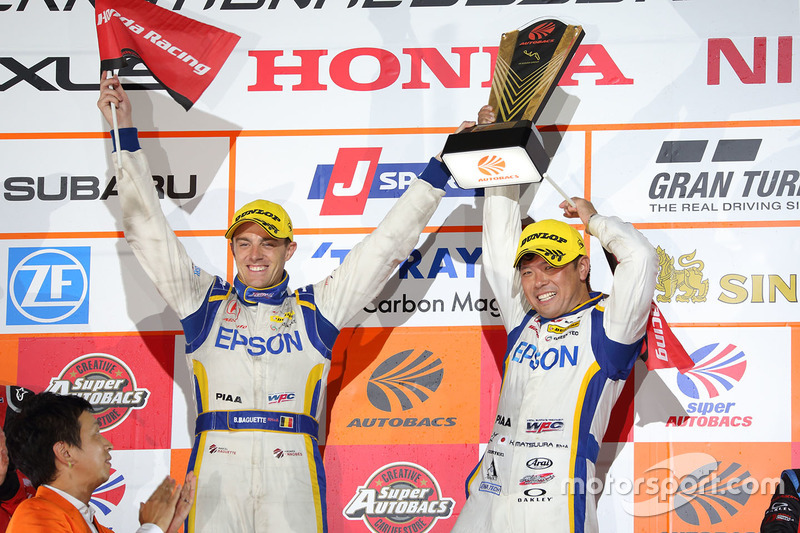 Baguette, who scored his first win since his previous Suzuka triumph last time out at Fuji alongside Koudai Tsukakoshi, said he was disappointed to qualify seventh on Saturday.

The Belgian admitted his laptime at the wheel of the #17 Honda in Q2 was “quite slow” and also said some set-up changes made after Tsukakoshi’s Q1 run didn’t pay off.

“I’m really disappointed about this qualifying,” said Baguette. “Looking at Koudai’s Q1, we were expecting a lot better.

“We have very strong race pace once again, even with the weight [40kg] the car is behaving well. But we have two cars in front of us that may not be so quick in the race [the Yokohama-shod Mugen Honda and Bandoh Toyota], a Suzuka is a hard track to overtake.

“We’ll have to push at the beginning because we have [Cerumo Toyotas] #38 and #14 in front of us and they are quite dangerous for the championship.”

Makino admitted to a mistake on his hot lap that leaves he and Naoki Yamamoto starting from eighth position in the #100 Kunimitsu Honda.

“We are really struggling with car set-up, particularly there is big understeer,” Makino told Motorsport.com. “I did a big mistake at Degner 2, I took too much outside kerb and I lost seven or eight tenths. [Without it] I would have had a similar time to Naoki’s Q1 time.

“Honestly, I think difficult to overtake at this track, and especially with the NSX. Sometimes we are following another car and we lose a lot of downforce. It’s going to be a tough race.”