YOKOHAMA, Japan – Nissan today confirmed its extensive global motorsports program will continue to expand through 2013 and beyond and be led by Nismo, the company’s dedicated performance road car and motorsports arm. 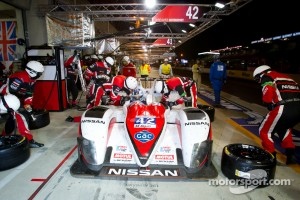 Nissan CEO Carlos Ghosn also confirmed that the company will return to the legendary Le Mans 24 Hours in 2014 as the Garage 56 entry for innovative concepts with an all-new race car incorporating electric technology. The entry will test innovative new powertrain technology and provide the Automobile Club de l’Ouest (ACO) and the Federation Internationale de l’Automobile (FIA) with data to enable all parties to evaluate the incorporation of this breakthrough technology ahead of a potential return to LMP1 in the future.

“We will return to Le Mans with a vehicle that will act as a high-speed test bed in the harshest of environments for both our road car and race car electric vehicle technology,” said Mr. Ghosn.

Even before this innovative and dramatic new race car breaks cover, Nismo will be hard at work supporting expanded Nissan motorsports campaigns around the globe, in an extensive effort that includes:

During today’s opening of the new global Nismo headquarters and development center near Yokohama in Japan, Nissan CEO Carlos Ghosn made the pledge to return to the Le Mans 24 Hours in 2014 in Garage 56.

Further details will be released as the project progresses, but the company is focusing on innovation and excitement, continuing the pioneering spirit of the Nissan DeltaWing; the award-winning experimental entry at Le Mans last year. The ACO have invited Nissan to fill Garage 56 in 2014 in a program that will enable all parties to gather data and evaluate new powertrains ahead of a potential return to LMP1 in the future.

More conventional Nissan power will continue to be seen at Le Mans in the meantime. The 2013 Le Mans entry list displays 17 Nissan-Nismo-powered cars, the highest entry by a manufacturer for 15 years. The Nismo-tuned Nissan VK45DE V8 engine is now firmly established as the powerplant of choice for the majority of the LMP2 teams. All cars will carry the designation ‘powered by Nissan Nismo’.

One of Nissan's major motorsport programs is focused on Nismo-developed versions of the flagship GT-R sports car for both works and privateer customer teams.

During 2012, the GT-R won races around the world – in Japan's SUPER GT Series (GT300 class and GT500 class) and Super Taikyu (GT3 class) and took its first victories in the British GT Championship and GT Cup.

For 2013 the Nissan GT-R Nismo GT3 has been further developed after last year’s successes, and the flagship Nismo-engineered GT-R GT500 version will once again compete in the SUPER GT Series.

The 2013 GT500 GT-R has received the following modifications:

1) Aerodynamics: The rear end of the vehicle was extensively updated halfway through last season, and it proved to be a dynamic breakthrough for the GT-R. Specifically, we were able to maintain extreme levels of downforce while drastically cutting down drag via the distinctive “shark teeth” rear design and by modifying the underbody. The drivers have highly praised the effects of these changes during testing.

2) Engine: The 3.4L V-8 VRH34B engine will be used for the third straight season. We will not only try to keep maximizing the engine’s output, but also strive to maximize its flexibility by modifying response and torque characteristics to match the layouts of different racetracks. Fuel efficiency will also be addressed by decreasing friction within the moving components of the drivetrain.

Kunihiko Kakimoto will continue as the Executive Team Director of the teams driving GT500 GT-Rs.

The Nissan GT-R Nismo GT3 is used in the Super GT GT300 class. The 2013 model benefits from improved engine output and durability and brake distribution, and optimized aerodynamic performance. The suspension has also been fine-tuned to match the car’s improved aerodynamics, and the gear ratios are being revised to match the engine’s increased output.


In Australia, Nissan Motorsport announced earlier this month that four of its new Altima V8 Supercars will form the factory team for 2013, leading the company’s long-awaited return to Australian Motorsport – where Nissan has seen some of its most famous victories.

James Moffat and Michael Caruso will drive Nissan Altimas backed by leading Internet security company Norton by Symantec, while the familiar black and white colors of global whiskey giant Jack Daniel’s are now being worn by the other two Altimas driven by Todd Kelly and Rick Kelly.

The opening race of the 2013 V8 Supercars Championship is the Clipsal 500 at the Adelaide Parklands, March 1-3.

Nissan last competed in what was then known as the Australian Touring Car Championship in 1992, and the return places motorsport at the heart of the plan to launch the Nissan Altima model line-up in Australia later this year.

Based on the Gran Turismo®5 game for PlayStation®3, players use a range of virtual Nissan cars on a variety of circuits. Last year alone saw over 500 million miles of virtual test drives taken in Nissan products, including Nissan Leaf, and millions of viewers in more than 160 countries have enjoyed the breakthrough TV shows that follow the Academy from PlayStation® to Podium.

The popularity of the GT Academy concept has made it a successful global program, giving millions of gamers across the world the opportunity to fulfill their motorsport dreams. Competitions are run across Europe and in Russia, the USA, South Africa and the Middle East, with further geographical expansion plans underway.

Winning GT Academy is a passport to a career in global motorsport, and in 2013 the newest graduates are set to focus on the Blancpain Endurance Series in a pair of Nissan GT-R Nismo GT3 cars.

The full programs for all of the GT Academy winners who have graduated to become “Nismo Athletes” will be announced soon. Nissan will also enter the revitalized FIA GT Series with the Nissan GT-R Nismo GT3, after the rejection of their entry to the British GT Championship for being ‘too fast’.

A philosophy of “Innovation that Excites” and a strong global leadership team highlight just how important competitive success is to Nissan's future plans on and off the track.

Darren Cox, Nissan’s Director for Global Motorsports and the global lead for the company's numerous racing programs said: “Nissan sees Motorsport as a key element in building our brand globally. Our focus is providing Motorsport fans access to our Innovative and Exciting programs from around the world from V8 Supercars to SUPER GT in Japan and the global sensation that is GT Academy. These will be complemented by surprises on and off track as we explore more innovative approaches to motorsport.”

At the heart of all of Nissan’s global motorsport programs is Nismo, the dedicated team that is now being strengthened with its newly opened headquarters and global responsibility for a new range of Nismo-badged performance road cars. Starting with the Juke Nismo, the range includes the 370Z Nismo and, in development, a new GT-R Nismo supercar that will be the ultimate road-ready flagship for the Nissan range.

Nismo President Shoichi Miyatani said: “Nismo is a key element in Nissan’s future global road car and motorsports strategy and we will quickly establish it as Nissan’s exclusive performance brand. This is the first time that all of our team has been located together and the entire facility will become a hothouse of passion and performance, and our talented engineers can stretch boundaries to create some new heroes.”

GRM drivers now rev up, ready to go with the 2013 season