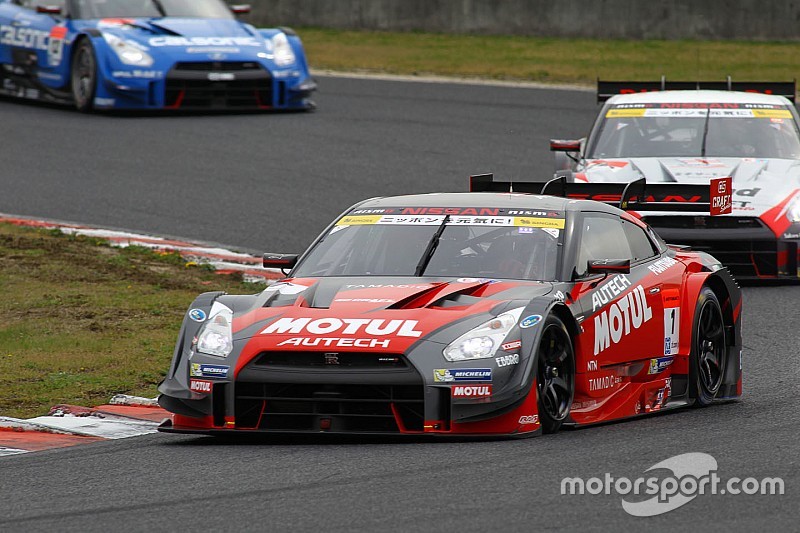 Tsugio Matsuda and Ronnie Quintarelli have triumphed in the opening round of the 2016 championship at the Okayama International Circuit.

Okayama, Japan – They have won back-to-back Super GT championships and now Tsugio Matsuda and Ronnie Quintarelli have triumphed in the opening round of the 2016 championship at the Okayama International Circuit.

After starting third, Quintarelli began a charge through traffic to close on second place - bringing the gap down to 0.3 of a second by lap 20. On Lap 28 he made a pass at the hairpin and set chase after the race leader.

After closing to be right on the tail of the leading Lexus, the Italian took over the lead when his rival pitted on lap 35. Three laps later incredible pit work by the NISMO crew had Tsugio Matsuda aboard the No.1 machine and back in the lead.

From that point on he ran unchallenged to the chequered flag - kicking off the duo's charge for their third consecutive championship in the best possible way.

“This is my first time winning in the opening round, as well as at Okayama, but I have to be honest, it really hasn’t sunk in yet," Quintarelli said.

"The team did a great job perfecting the car for this weekend and Michelin really came through for us. Our tire selection is really what enabled us to win here. It really goes to show that if your car and tires are properly suited to the conditions, you can really push hard. We’ll have a weight handicap in the next round so we’ll be working hard in the next round to overcome that.”

Although the No.1 GT-R took victory, all eyes were on the No.46 GT-R and young star Chiyo. Although this was his debut GT500 race, in the previous day’s official qualifying he managed to record the top time in the first qualifying session.

Yet it was his performance on race day that had everyone's attention. Veteran, Satoshi Motoyama, took charge of the first stint and maintained their position until pitting in at lap 35. Here he handed the car over to Chiyo.

After taking the reins, Chiyo pulled out a momentous drive and began to swiftly close in on the rivals in front. By lap 52 he moved into third place after a stunning battle and then set his sights on second place. Despite a tough fight in the closing laps, he was unable to steal a GT-R 1-2 but still impressed with his GT500 debut.

“There were times when I was edging off the track but I was totally focused on the road ahead and blindly pushed forward," Chiyo said.

"Ever since it was decided I would compete in the GT500 I’ve been taught a great deal by Motoyama and the team, which I’m really thankful for. When he told me I’d done a great job I was really ecstatic.”

In GT300, Jann Mardenborough made his Japanese Super GT debut in GT300 with Kazuki Hoshino and scored 10th place in the hotly contested 27-car field.

"It’s a shame really because we were running in 8th for quite a lot of the race and then in the last five laps we were overtaken twice, which was pretty frustrating." Mardenborough said.

"But we hit all our targets in the pit stop and Kazuki did a great job at the start of the race, and it feels good to finish my first Super GT race and to get a point.

"At the start and the middle of the race the car was pretty consistent. We had a big debrief with the engineers and so we’ll be getting prepared for Fuji. It’s very early in the season and every point counts so we’re going to keep pushing."

Richard Lyons ahead of the Fuji International Speedway