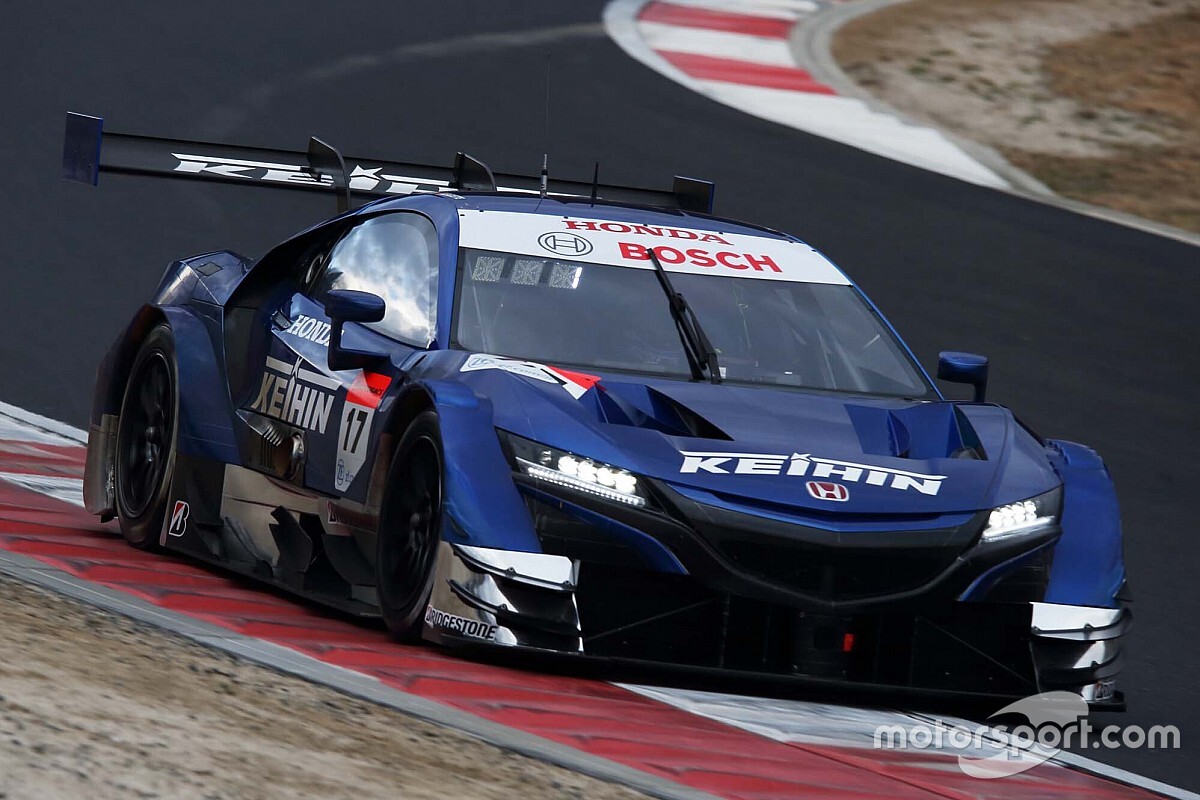 Honda set the pace on the opening day of SUPER GT pre-season testing at the Okayama Circuit, with Bertrand Baguette setting the quickest time in the Real Racing NSX-GT.

While the two-day test began as scheduled on Saturday despite the coronavirus pandemic, no spectators were allowed entry to the former Pacific Grand Prix venue, and all team members had to undergo medical tests before being given access to the paddock.

The track running itself was affected by multiple rain showers, but the sky cleared sufficiently for slick tyres by the end of both the morning and the afternoon sessions.

In the first session, new Impul Nissan recruit Kazuki Hiramine took advantage of increasingly favourable track conditions to move atop the timesheets with 1m19.658s, improving on his own wet tyre benchmark of 1m24.658s.

That time remained quickest until about seven minutes were left in the session, when Tomoki Nojiri lapped the circuit in 1m19.202s in his ARTA Honda to seize the top spot.

Soon after, the Real Racing Honda of Baguette also broke the 1m20s barrier, the Belgian’s time of 1m19.638s slotting him in between Nojiri and Hiramine in second.

Rain returned during the lunch break, leading to more wet running, before the track dried again for the final hour of Day 1.

However, Fenestraz would soon be usurped by the NISMO-entered Nissan of Ronnie Quintarelli, before 2018 GT500 champion Naoki Yamamoto (Kunimitsu Honda) posted a time of 1m18.289s to go faster than both.

For a while it appeared that Yamamoto would end the day with the quickest time, but an extended 15-minute GT500-only run allowed Baguette to improve the benchmark with 1m17.850s.

Nojiri's teammate Nirei Fukuzumi also made a last-minute improvement after taking over the ARTA Honda, but fell short of Baguette’s time by three tenths and ended up second, while Fenestraz finished third with his own late flyer.

Yamamoto was left fourth in the final order, while Kazuya Oshima was fifth in the #14 Cerumo Toyota. The sister Cerumo car of Yuji Tachikawa was next up in sixth, while Heikki Kovalainen was seventh in the SARD Toyota.

Kovalainen’s former teammate Kohei Hirate led the Nissan contingent with the eighth-quickest time of the day in the B-Max Racing GT-R, 0.712s down on Baguette’s chart-topping lap.

Hiramine eventually ended up ninth for Impul, while the top 10 was completed by the Nissan of Quintarelli.

Reigning Super Formula champion Nick Cassidy was just over a second off the pace in 11th position in the #37 TOM’S Toyota.

Apart from the usual 15 GT500 cars, Nissan also ran an extra Yokohama-shod GT-R test car, but it only completed 16 laps all day, with its quickest lap being a 1m20.311s.

The GT300 field was led by Audi driver Christopher Mies at the wheel of Team Hitotsuyama's R8 LMS with a best time of 1m25.649s, almost half a second up on the next-best in class, the #96 LM Corsa Lexus RC F GT3.