The second Super GT race in career for Cyndie Allemann was on at Fuji Speedway during the ‘Golden Week’, the traditional Japanese vacation week.

Shizuoka, Japan, May 4th, 2012 – This second race proved to be somewhat more difficult than the first one a month ago at Okayama, with a torrential rain on Thursday, practice and qualifying day. Things started well with a 12th place in the morning practice session. 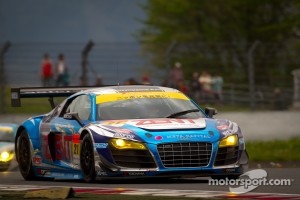 “Interesting round because we were three drivers sharing the car instead of the usual two, with the addition of Yuki Taniguchi in the team for this longer race of 500km. This and the fact that the weather conditions on Thursday were catastrophic – the track looked like a swimming pool – meant that we didn’t practice much. Nevertheless, I did well under the rain, despite having made a mere five laps. For qualifying, the format was new with a Q1 session, followed with a Super Lap shootout for the top-10. I was supposed to do the Super Lap but unfortunately, we didn’t make it into the top-10 group with a 20th fastest lap time.”

Race day also provided Cyndie with a lot of new experiences, one of them being her participation in the ‘Circuit Safari’, an activity specific to the Super GT series. 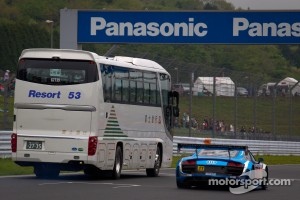 “During the warmup, I was driving during the ‘Circuit Safari’, which was a brand new experience for me. The Safari means that we drive at full speed around buses full of fans at the same time on the track. However, we cannot spin or go off-track or else, we get penalized. Furthermore, in those mixed wet and dry track conditions, driving at the same time than those buses on the track brought a few close call situations. Nevertheless, it was a funny experience, but also very strange at the same time.”

For the race, weather conditions were once again a factor for the #21 Audi.

“Aki took the start and gained a few positions all the way to the 14th place, but Taniguchi spun and we were back to the 26th spot before I could even start my stint. I then got in the car for a very long stint with a hard tire compound. After 6-7 laps, I started to get a fast pace and found my way back up in the field. At the end, we finished 15th which was somewhat of a disappointment compared with Okayama, considering the fact that our goal was a top-10 finish. But this is racing. The third round of the championship in Sepang is coming fast and the key will be to prepare ourselves better for this race.” 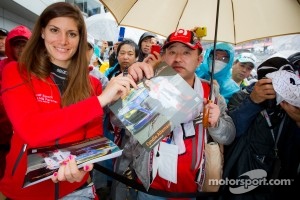 ‘Cyndie-mania’ once again hit the Super GT paddock, with more and more supporters for the Swiss driver.

“In conclusion, I would like to thank my team, Hitotsuyama Racing, and sponsors, Zent and Racerbook. I would also like to thank all those fans who came out here to support me this week. There is more and more of them and I must admit that it was impressive to this never-ending crowd and to sign all those autographs during the two pitwalk sessions. I think that, yes, they are intrigued to see a girl participate in Super GT in a competitive way, but I also feel a genuine passion on their part. It’s all for the best if it can also help my team and partners, as well as the series.”

Cyndie Allemann: a World class driver, top athlete and brand ambassador. Always a fan favorite, whether in Europe, in the USA and soon in Japan, 25 years old Cyndie Allemann was literally born for speed.

Her 18-year racing career has seen her compete at the highest levels in many different series and tracks around the World: karting (winning the European junior title when she was only thirteen), open-wheel (EuroF3, Indy Lights, etc.), GT (FIA-GT1 World Championship) and endurance racing (GT1 podium at Spa in the Le Mans Series, 24 Hours of Le Mans, etc.). In 2012, she races in the Japan Super GT Series with the Hitotsuyama Racing team on the Audi R8 LMS.