Sepang, Malaysia, June 10th, 2012 – Cyndie Allemann was competing in her third Super GT race in career, last weekend at Sepang International Circuit, and hopes were high as she won a race on this same track two weeks ago in the Malaysian Super Series. Unfortunately, a balance of performance not to the advantage of the Zent Audi R8 LMS as well as the Malaysian heat would provide their share of issues to the Swiss. 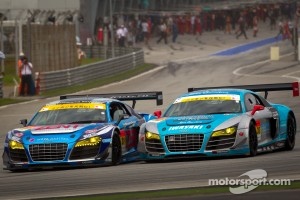 “My spirit was very positive on this weekend, especially because of my race win in the MSS two weeks ago. I know this track very well, now. During the practice session, we immediately realized that our car was not fast enough because of the FIA balance of performance. Straight line speed was an issue during the whole weekend. On the pit straight, we were 15 kph off the fastest cars, which is a huge handicap. We had to battle in the braking zones and in the corners to try and get our time back, but even that was not enough to score a top-10 in qualifying. My teammate qualified the car in 19th position, after a few setup issues because we changed our tire compound. But we really worked well on the car during the morning warm-up and we found a good balance for the race.”

The race was very hectic for Cyndie, who ended up making one of the longest stints of the whole field. A top-10 during the race was possible, but bad luck and the learning process of the start procedure specific to the Super GT series decided otherwise.

“Right at the beginning, I received a ‘drive-trough penalty’: the Super GT has a very specific rule about not passing the preceding car before the start line, even if the start light is green. The car on my left was really sleeping at the start and on my side, I simply followed my line and ended up slightly in front of him at the start line. Further to this, someone got in trouble in front of me on lap 3 and blocked me. The car behind me tried to take advantage of this with a risky move and ended up touching my car from behind and pushed me to a half spin. Right there, I was behind the pack by half a lap. From this point on, I started a nice comeback and passed two cars, while making fast and regular times.” 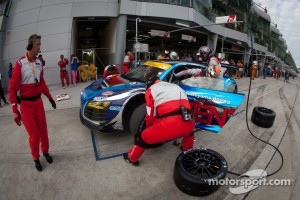 The end of her stint was also full of emotions.

“When I came back to the pits to give the car back to my teammate, I made a mistake at pit entry while trying to put on the rev limiter while I was still in third gear – I wanted to downshift too fast and crossed the control line at 63 kph while the limit is 60 kph, so we received another drive-trough penalty’. But then again, my stint was super long (among the longest, in fact), and with the heat and exhaustion, my focus started to get weaker. The last five laps were really painful with this extreme heat. But I tried to hold all the way to the end because my team wanted me to do long stint. This is when I made this mistake – we really didn’t need it but this is another experience for me. Despite all this, I feel more and more comfortable with the car. Along with the team, we understood a lot of things this weekend with the setup. We made some nice improvements to the car throughout the weekend, so on this side, it was very positive. But the result was not what we wanted. Still, we finished 14th, which is quite surprising considering all the the small mistakes we made.”

The extreme heat and humidity conditions also pushed the very athletic Swiss at her physical limits. She had to make a visit to the track medical center after her stint to get a control check-up.

“Coming from Switzerland, I’m not used to that kind of heat and humidity – in the cockpit, it was more than 55C. I could feel getting burned all over, especially at the feet and legs, and even more important at my head that became very very hot and I didn’t have any air to breathe. The hardest to manage was coming out of the car when I really felt dizzy and my head was spinning. Further to this, I had a hard time breathing and my skin was burning. I’ve never experience those symptoms before and I was quite surprised, I must admit. In fact, I had to go to the medical center because I wasn’t feeling well at all and we wanted to make sure I was not undergoing a heatstroke. They checked my pulsation and pressure. I also received a re-hydration so that I can feel better. I must now make sure that I drink well and that I re-hydrate my body. As soon as this week, I’ll make a few researches for a new physical workout so that at the next race where it’s very hot, I don’t find myself in this type of situation.” 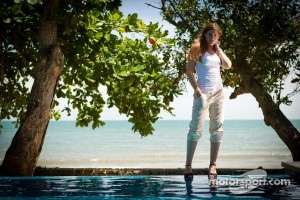 On a lighter note, this weekend was also the discovery of the ‘postcard’ side of Malaysia, for Cyndie.

“I really liked this second trip to Malaysia. Two weeks ago, my hotel was in Kuala Lumpur and I discovered an impressive city. For this time around, I was on the seaside in Port Dickson in a beach resort. It was very cool with a swimming pool and the beach, which allowed me to relax a little bit on Friday when I arrived.”

“Finally, I would like to thank my team, Hitotsuyama Racing, and sponsors, Zent and Racerbook. I would also like to thank all those fans who came out here to support me this week. I have a lot of fans in Malaysia and it was really nice to meet them during the pitwalks.”

This press release comes with two photos. More are available upon request at cyndie.allemann.pr@gmail.com.

Cyndie Allemann: a World class driver, top athlete and brand ambassador. Always a fan favorite, whether in Europe, in the USA and now in Japan, 26 years old Cyndie Allemann was literally born for speed.

Her 19-year racing career has seen her compete at the highest levels in many different series and tracks around the World: karting (winning the European junior title when she was only thirteen), open-wheel (EuroF3, Indy Lights, etc.), GT (FIA-GT1 World Championship) and endurance racing (GT1 podium at Spa in the Le Mans Series, 24 Hours of Le Mans, etc.). In 2012, she races in the Japan Super GT Series with the Hitotsuyama Racing team on the Audi R8 LMS.