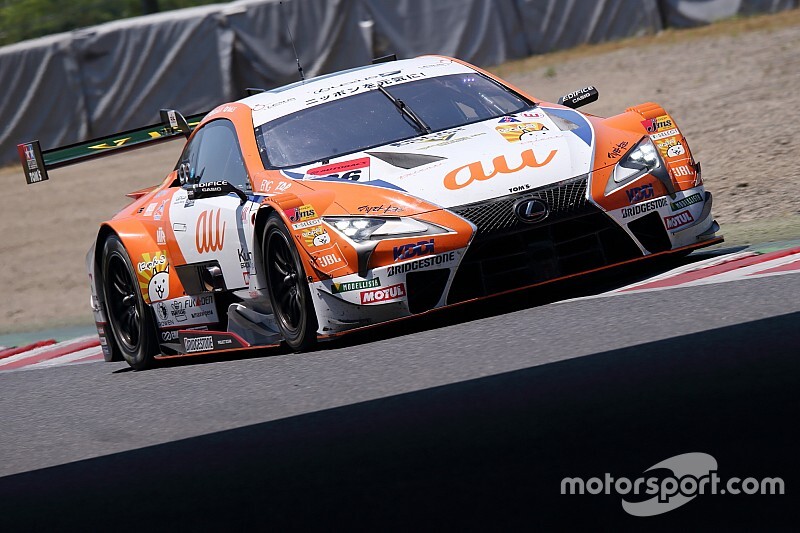 The TOM’S team locked out the front row of the grid for the Suzuka round of SUPER GT series, as Nissan’s struggles turned qualifying into a two-horse race between Lexus and Honda.

Fresh off his sixth Super Formula win at Autopolis last weekend, Yuhi Sekiguchi put the #36 TOM’S Lexus he shares with Kazuki Nakajima on pole position for the third round of the season.

Sekiguchi clocked a time of 1m45.775s in the dying minutes of the session, pipping the sister #37 TOM’S car of 2017 champions Nick Cassidy and Ryo Hirakawa by just 0.013s to take pole.

ARTA Honda pair Tomoki Nojiri and Takuya Izawa qualified four tenths adrift of the Lexus pair in third, with Impul’s Daiki Sasaki and James Rossiter fourth in the only Nissan that advanced to the second leg of qualifying.

Nissan was largely unchallenged in qualifying for the opening two rounds of the season, with the factory NISMO squad taking convincing poles at both Okayama and Fuji.

However, after showing equally blistering pace in practice, only Impul could make it to Q2, allowing Lexus and Honda to grab eight of the top 10 slots on the grid.

Reigning champions Jenson Button and Naoki Yamamoto were seventh-fastest in the Kunimitsu Honda, over seven tenths off pace-setters Sekiguchi and Nakajima.

They will share the fourth row of the grid with Real Racing’s Bertrand Baguette and Koudai Tsukakoshi, just over a month after the two cars tangled while battling for the lead at Okayama.

Former Formula 1 driver Heikki Kovalainen and Yuichi Nakayama just missed the Q2 cut in the Sard Lexus and will start ninth, ahead of the NISMO-entered Nissan of Ronnie Quintarelli and Tsugio Matsuda.

Yuji Tachikawa and Hiroaki Ishiura (Cerumo Lexus) could only lodge the 14th quickest time in a field of 15 cars, handicapped by heavy ballast following their victory at Fuji earlier this month.

Toyota squad Tsuchiya Engineering claimed pole position in the GT300 class, with Takamitsu Matsui and Kimiya Sato lapping the Suzuka circuit in 1m57.008s in the #25 86 MC.

The result comes in the wake of Tsuchiya Engineering receiving a financial boost from title sponsor and beverage company Hoppy, which should allow it to see out the season.

The first part of GT300 qualifying was halted for a short while after Kyosuke Mineo crashed his #9 Pacific Racing Porsche at the hairpin.