With track temperatures hovering around the 50-degree mark, the ballast-free Dunlop-shod #64 Honda NSX-GT shared by Takuya Izawa and Hiroki Otsu was in a class of one all day.

Izawa convincingly topped practice by some half a second in the morning, and GT500 rookie Otsu continued that good work in Q1 with a time 0.340s clear of the field.

In the eight-car Q2 shootout, Izawa pumped in a lap of 1m46.239s to secure Nakajima Racing and Dunlop's first GT500 pole since the 2012 Golden Week Fuji race.

Second-fastest in Q1, the #23 NISMO Nissan GT-R was also the closest challenger in Q2 as Ronnie Quintarelli came up 0.460s shy of Izawa's benchmark to secure a spot on the front row.

The two Cerumo Toyota GR Supras will make up the second row, with Yuji Tachikawa in the #38 car beating the sister #14 machine of Sho Tsuboi by just over a tenth.

Behind the two Bridgestone-equipped cars was the Yokohama-shod Mugen Honda, with Hideki Mutoh ensuring all four tyre manufacturers made it in the top five.

SUPER GT returnee Heikki Kovalainen was denied the chance to drive in qualifying as his teammate in the SARD Toyota, Yuichi Nakayama, was narrowly eliminated in Q1. The pair will start ninth ahead of the #3 NDDP/B-Max Racing Nissan.

The two TOM'S Supras, carrying the biggest success handicaps in the field at 58kg and 60kg respectively, qualified 11th and 12th, with Nick Cassidy in the #37 car leading stablemate Sacha Fenestraz in the championship-leading #36 machine.

More unexpected was that the ARTA Honda, carrying only 8kg of ballast, struggled to a lowly 14th place in the hands of Nirei Fukuzumi. 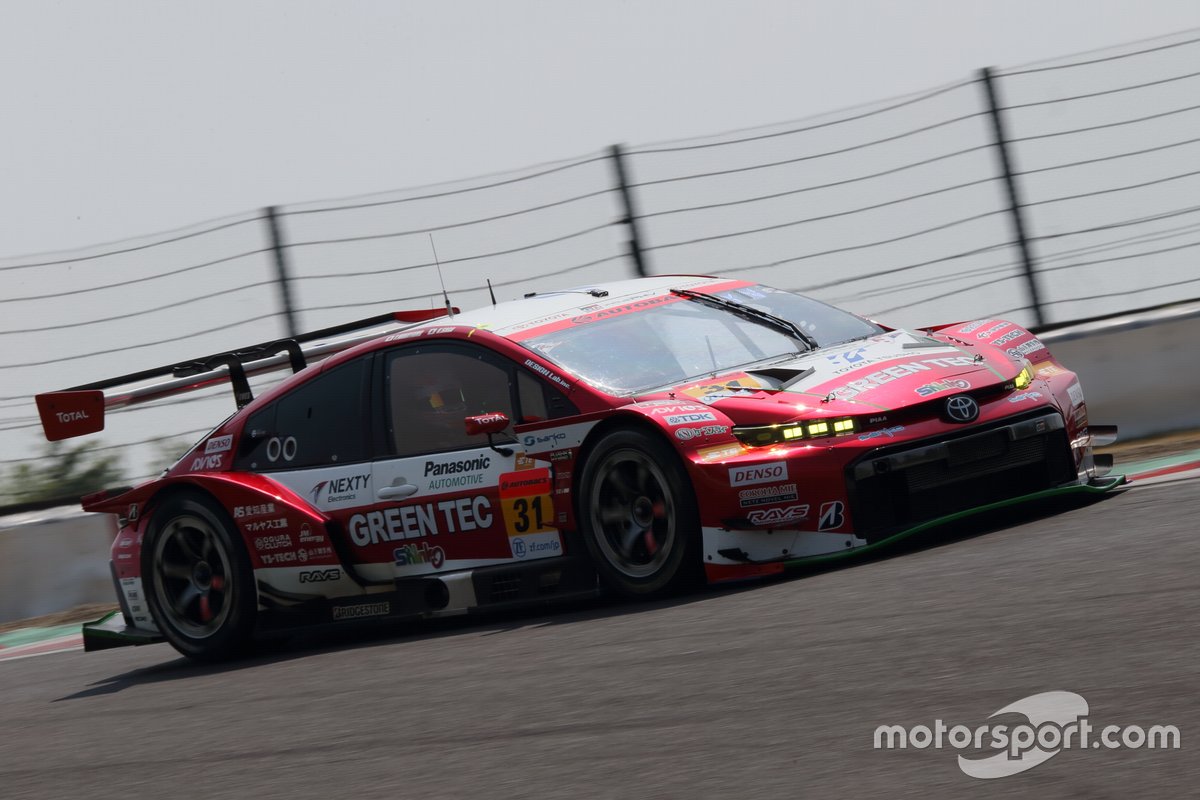 Ex-Nissan GT500 driver de Oliveira set the fastest time in Q2 of 1m58.053s, only to have it taken away for exceeding track limits exiting Spoon corner in the #56 Nissan GT-R NISMO GT3 he shares with Kiyoto Fujinami.

That promoted the ballast-free Prius of Koki Saga and Yuhki Nakayama to pole, with Saga setting the class benchmark of 1m58.189s.

Toshiki Oyu was promoted to second in the ARTA Honda NSX GT3 he shares with Shinichi Takagi, while de Oliveira’s best valid laptime in the Kondo Nissan - which is carrying 42kg of ballast - proved enough for third.

Cars Tokai Dream28’s Lotus Evora MC, which is carrying 60kg of ballast after its win last time out, could only qualify down in 11th place.