Nirei Fukuzumi secured the ARTA Honda squad's third pole position of the 2020 SUPER GT season on the series' second visit of the year to Suzuka.

In the Q2 pole shootout, ex-Formula 2 racer Fukuzumi posted a 1m44.963s at the wheel of the ARTA's Honda NSX-GT, beating Takuya Izawa in Nakajima Racing Honda by 0.091 seconds.

Fukuzumi's teammate Tomoki Nojiri had only been third-fastest in Q1, which was topped by the Bandoh Toyota GR Supra of Ritomo Miyata ahead of Hiroki Otsu in the Nakajima car.

But while Fukuzumi and Izawa were both able to improve on their teammate's efforts, Yuji Kunimoto was slower than Miyata's benchmark in Q2, ending up 0.385s off the pace in third.

Team Impul driver Kazuki Hiramine, who suffered an off at the S Curve during morning practice, was fourth-fastest in the best of the Nissan GT-Rs, ahead of Kohei Hirate in the NDDP/B-Max Racing machine and Hideki Mutoh in the Mugen Honda.

A mistake from Yuji Tachikawa at the final chicane in the #38 Cerumo Toyota consigned him to seventh place, while Tadasuke Makino was eighth in the only car with a stage two fuel restrictor to get out of Q1, the Kunimitsu Honda.

Sho Tsuboi took the final spot in the top 10 in the points-leading #14 Cerumo Toyota, ahead of the two TOM'S GR Supras of Nick Cassidy and Yuhi Sekiguchi.

A crash for Tsugio Matsuda at Dunlop Corner during Q1, which brought out the red flags, consigned the NISMO Nissan he shares with Quintarelli to 15th and last.

Morio Nitta and Sena Sakaguchi claimed pole in the GT300 class at the wheel of the #96 K-Tunes Racing Lexus RC F. 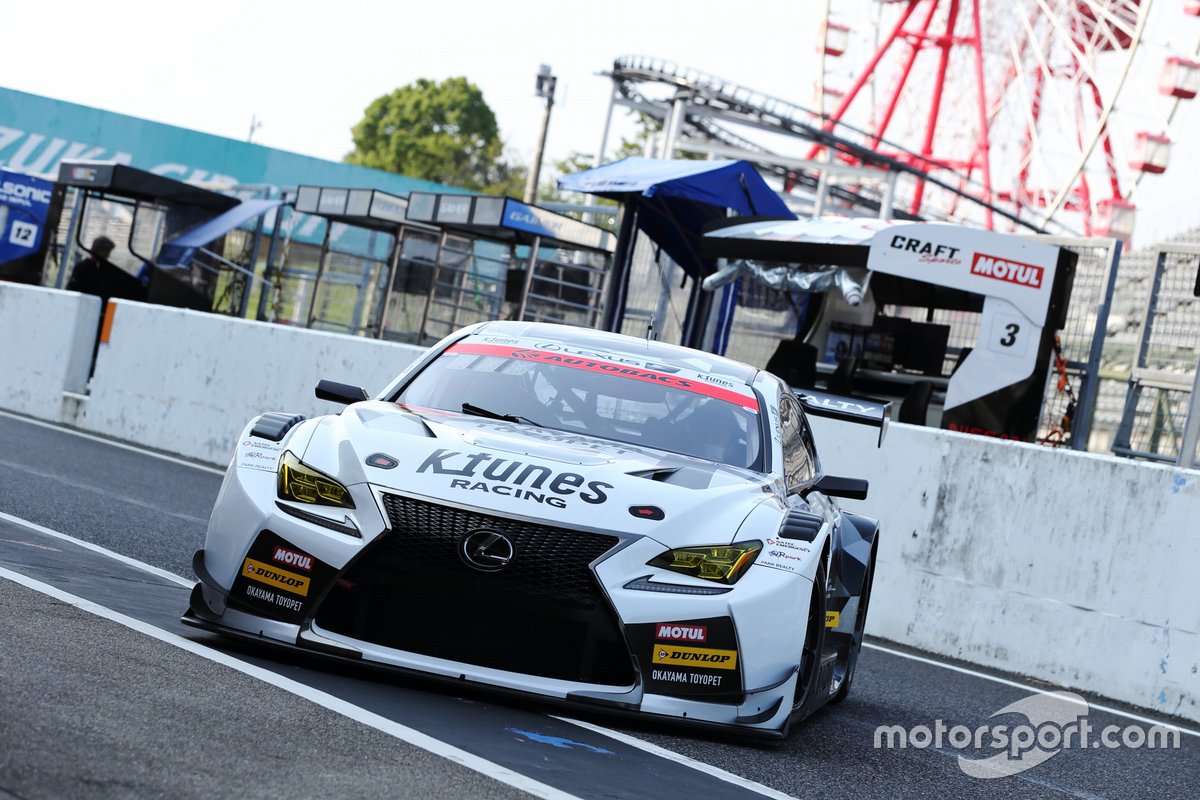 Series veteran Nitta topped his Q1 group with a time of 1m56.459s, and Sakaguchi raised the bar to a 1m55.838s to beat Hideki Yamauchi in the works Subaru BRZ, one of five cars carrying the maximum 100kg handicap this weekend, by just over two tenths of a second.

Kazuko Kotaka qualified the best of the Mother Chassis cars, the Inging Motorsport Toyota 86, third, followed by the UpGarage Honda NSX GT3 of Takashi Kobayashi and Katsuyuki Hiranaka in the #11 Gainer Nissan GT-R NISMO GT3, which is also carrying the 100kg handicap.

The next best of the cars with the maximum penalty was the ARTA Honda NSX of Toshiki Oyu in seventh, followed by the Kondo Racing Nissan of Kiyoto Fujinami in 11th.

In his first SUPER GT qualifying appearance, ex-Rebellion LMP1 driver Mathias Beche qualified the Team Thailand Lexus 21st out of the 30 cars in class, while the points-leading LEON Racing Mercedes-AMG GT3 struggled with its 100kg handicap to 25th.