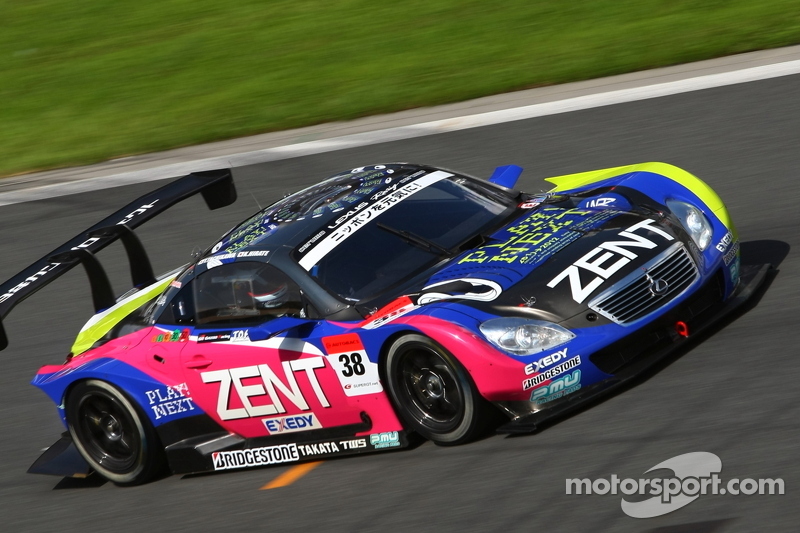 The qualifying for the MOTEGI GT 250km RACE, Round 8 of the 2012 AUTOBACS SUPER GT, took place at the Twin Ring Motegi (lap = 4.801 km) in Tochigi Pref. on Oct. 27. In the GT500 class qualifying, the ZENT CERUMO SC430 driven by Yuji Tachikawa and Kohei Hirate won the pole position for the second time this season. With this result, the ZENT CERUMO SC430 will start from the front row in the race on the 28th.

The qualifying for this round was run in a knock-out format. In this system the official qualifying stage is run in three sessions (Q1, Q2, Q3). In the first two of these sessions the teams unable to qualify above the cut-off point are “knocked out” of the competition and not able to move on to the next session, at which point their place in the qualifying order is decided and the remaining teams compete for grid order based on their time trial performances.

The weather this day at Twin Ring Motegi was fine and hot enough to work up a sweat out in the sun. And the qualifying competition was equally hot, with several cars breaking the course record.

In the qualifying, it was the performances of the Lexus SC430 cars that stood out. From the first qualifying session (Q1), Daisuke Ito in the ENEOS SUSTINA SC430 beat the previous course record by more than two seconds with a 1’41.280 lap to finish fastest in the session. He was followed by Yuji Tachikawa in the ZENT CERUMO SC430, also with a record time. The third fastest finisher was another SC430, giving the Lexus teams a sweep of the top three. In Q2 the ENEOS SUSTINA SC430, driven this time by Kazuya Oshima, the ZENT CERUMO SC430 driven by Kohei Hirate and a third SC430 again swept the top three places.

The highlight of Q3 was the showdown by these top two SC430 machines. First, Daisuke Ito in the ENEOS SUSTINA SC430 that had been running so well in the previous sessions ran a stunning lap time of １’41.045 that broke the course record he had set in Q1. But, running just after that, Yuji Tachikawa in the ZENT CERUMO SC430 was even more amazing. Pushing the limits with sharp driving in each sector of the course, he pounded out a time of １’40.982. After this the S Road REITO MOLA GT-R that clinched the season championship title in the previous round and the Honda HSV-010 GT teams, for which Motegi is their home course, tried to beat the time of Tachikawa and the ZENT machine but failed.

This gave the ZENT CERUMO SC430 its second pole position of the season, following the one in the series opener. With this pole, Yuji Tachikawa extended his own record for most SUPER GT pole positions by a driver to 17. Although the NISSAN GT-R denied them the GT500 class championship, by winning the pole position in four of the eight rounds this season, the LEXUS SC430 roved it was faster in this all-out speed test.

In the GT300 class the HANKOOK PORSCHE driven by Masami Kageyama recorded a fastest time of 1’48.873 to win its third pole position of the season. This incredibly fast time beat the old GT300 course record by more than four seconds in winning the pole position. The HANKOOK PORSCHE’s driver pair of Kageyama and Tomonobu Fujii currently lead the season point standings, so this pole position puts them in perfect position to win the season title in the race of the 28th.

Yuji Tachikawa: “Although the championship title was won in the previous round (by car No. 1) I put that out of my mind and gave this qualifying everything I had. I knew that Q3 was going to be a showdown with the ENEOS team. In my final time attack I made a bit of a mistake in the third turn early in the lap and then I ran hard to try to make up for that time loss and was able to win the pole position. The machine is in good condition and we were able to get the pole, so I want to keep this momentum going and show everyone our speed by winning the first and last races of the season.”

Masami Kageyama: “I kept in mind how very important it is to win the pole position here at the Motegi track. At the end of the qualifying I was finally able to get everything together and win the pole position at the end of Q3. Again this time I didn’t have much driving time in the car, but [teammate Tomonobu] Fujii gave me lots of quality information about the machine’s feeling. This was very useful for us in setting up the machine and I’m grateful to him for it. It won’t matter for us whether the race tomorrow is in the rain or dry. I want to see us take this good flow on to win the championship.”

A tough race for Andrea Caldarelli at Autopolis