The #14 Cerumo Supra shared by reigning series champion Oshima and new teammate Sho Tsuboi topped the timesheets on the second day of the test, the pair ending up with the second-fastest time of the test overall behind the Real Racing Honda squad.

Tsuboi set the car's quickest time of 1m18.123s at the wheel of the WAKO'S-liveried car, leading a Cerumo 1-2 and an all-Toyota top three.

Oshima expressed confidence that the benchmark time set by Bertrand Baguette was not out of reach and said that scoring victory when the SUPER GT season finally begins amid the uncertainty caused by the global coronavirus pandemic is realistic.

"Because the other manufacturers seem to be fast, I think we need to close the gap," said Oshima. "But [Honda’s quickest time on the first day] is not unattainable.

"I don’t understand this car perfectly, and since the tyres are also changing, I have to change the set-up to fit them well. I have been experimenting with various set-ups.

"Naturally, we want to get good results with this car, and we understand if we win the season opener, we will be highly evaluated, so we must do our best.

"Of course, we are aiming for a debut win [for the Supra]. And in this test I got the feeling that there is a possibility."

Fenestraz "excited" but not setting targets

The #36 TOM'S Supra completed an all-Toyota top three on the second day of the test behind the two Cerumo-run cars, concluding the test with the fifth-fastest time overall.

Reigning All-Japan Formula 3 champion Sacha Fenestraz, who is making his GT500 debut for TOM'S this season, said the test had gone well but was reluctant to make any predictions about where the team stacked up in the competitive order.

"The car is quick and having a good time here, but conditions are very difficult," Fenestraz told Motorsport.com. "Very difficult to compare [manufacturers].

"Before Round 1 qualifying, it’s difficult to compare – tyres, fuel, weight, everything is difficult. It’s been good. But [Saturday] was good, [Sunday] as well. Let’s see. I’m excited." 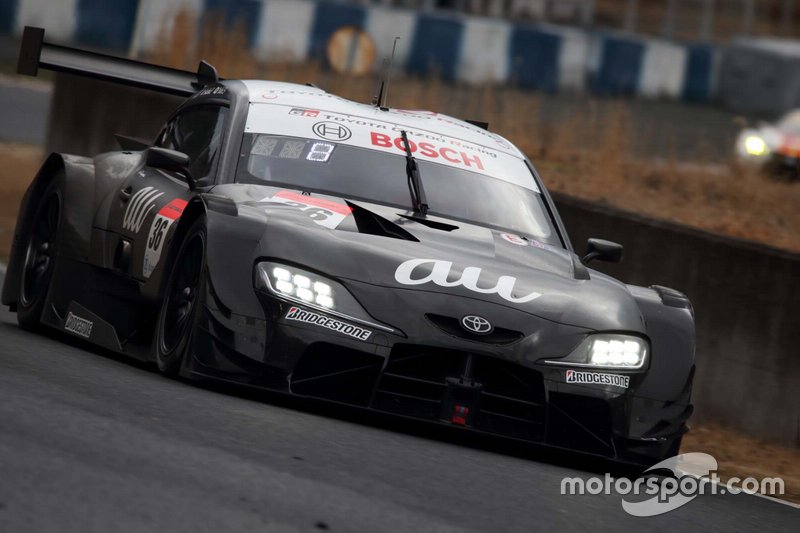 Fenestraz added that his own personal goal would be to match and ultimately better the pace of his TOM'S teammate Yuhi Sekiguchi, who last year partnered Kazuki Nakajima.

"My own target is to learn as much as possible," said the Frenchman. "I have a very quick teammate in Yuhi, one of the quickest Japanese drivers at the moment.

"That’s very good for me, I can learn from him. My target is to be as close as possible to Yuhi’s laptimes and be as quick as him as early as possible."