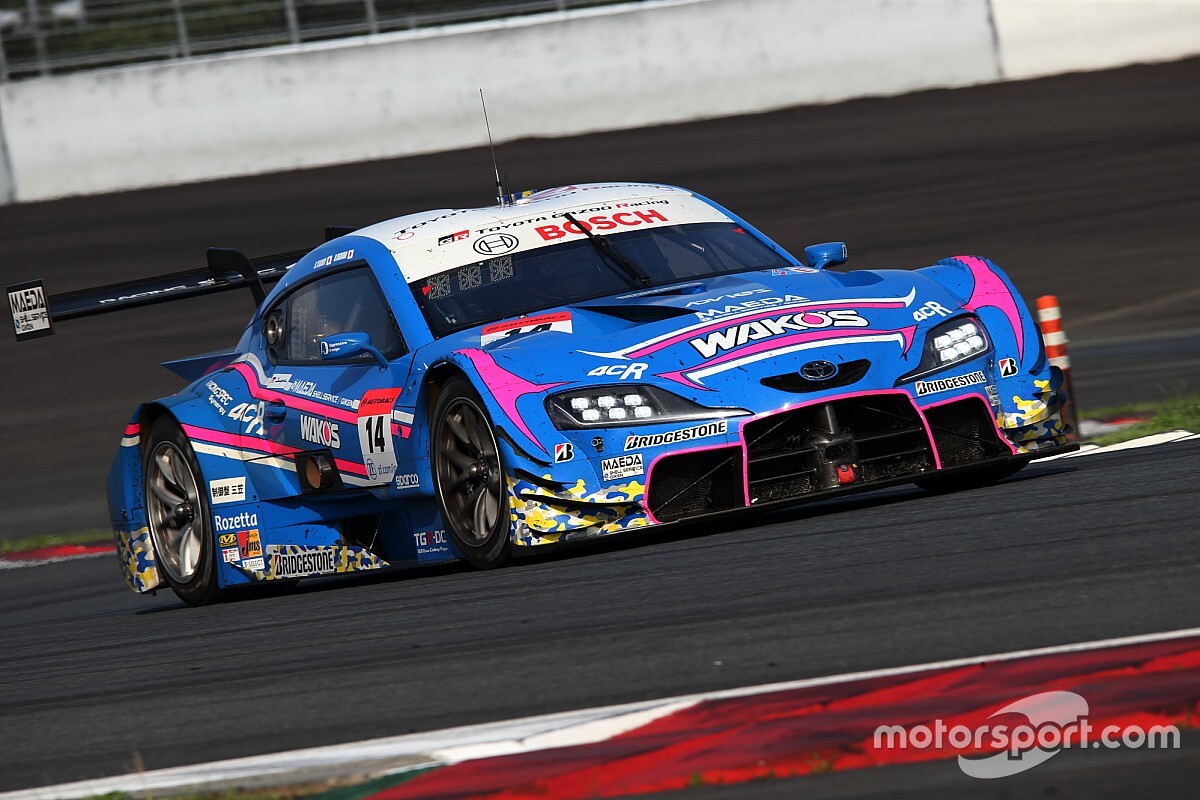 In the SUPER GT season opener at Fuji Speedway last month, Toyota’s ‘new’ GT500 team scored a podium first time out – but scratch beneath the surface and there’s not much new about Rookie Racing.

Kazuya Oshima and Sho Tsuboi brought home the Wako’s-sponsored #14 Toyota GR Supra for third place behind the two TOM’S cars, helping the manufacturer complete a clean sweep of the top five in its first race for its new GT500 contender.

On the entry list, the #14 car is listed under the ‘TGR Team Wako’s Rookie’ banner, while the maintenance of the car is handled by Team Cerumo, which has been part of the Toyota stable since the introduction of the original Supra all the way back in 1995.

But it’s no co-incidence that the livery is extremely similar to that used by Team LeMans last year on its way to the title, and the #14 car is best understood as a continuation of that effort. Indeed, the majority of the crew are the same as that which helped Oshima and Kenta Yamashita to last year’s title, including chief engineer Kazuya Abe.

The only changes of note are that Yamashita has been replaced by fellow Toyota-backed youngster Tsuboi, and that former grand prix driver Toranosuke Takagi – himself a SUPER GT champion with Cerumo in 2005 – is the team director, replacing Juichi Wakisaka.

Asked if his new surroundings really felt like being in a new team, Oshima told Motorsport.com: “For me it’s almost the same. I just talk with my engineer and my teammate [Tsuboi] and the mechanics, and they are almost all the same.

“Because the car maintenance is [handled by] the Cerumo team, there are slightly fewer mechanics than last year. Last year we had a lot of [mechanics] to make an alignment, set-up, support. Now we have not, and at first it was a bit confusing, but now it’s ok.” 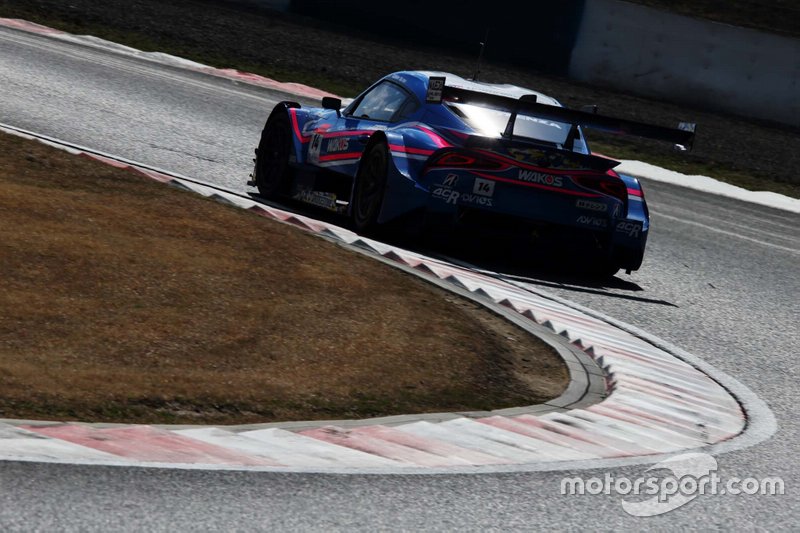 Before going any further, it’s worth examining why Team LeMans was stripped of a place it had held on Toyota’s GT500 roster since 1999. And it comes down to a falling out between the Japanese auto giant and Yoshinori Katayama, the Okayama track owner that effectively took control of Team LeMans in 2018 after previous team boss Hiroyoshi Doruma left.

Relations between Toyota and Katayama, whose son Yoshiaki raced in All-Japan Formula 3 last year, soured in particular when TOM’S driver Kazuko Kotaka was banned from racing at Okayama – therefore missing two F3 rounds last year – following an incident in which Kotaka crashed a road car during a track day at the former Pacific Grand Prix venue.

There was also an underlying feeling that Katayama's main motive for buying the team was to simply to provide his son the chance to race in Super Formula (indeed, Yoshiaki drove for Team LeMans during last year's rookie test), and sure enough the rupture between the two parties extended to the single-seater series as well.

Oshima alluded to the ill-feeling that existed when recalling the circumstances of he and Yamashita winning the championship for Team LeMans in its final GT500 appearance.

“I just wanted to get the championship and also the team staff wanted to get that,” he told Motorsport.com. “I was concentrated just on that. But before the race we had to talk with the team owner, that meeting was very bad feeling for me.

“The team [owner] was feeling like I bring the car to the other team [Cerumo], and the sponsors. But it was not about me. It was Toyota’s decision.” 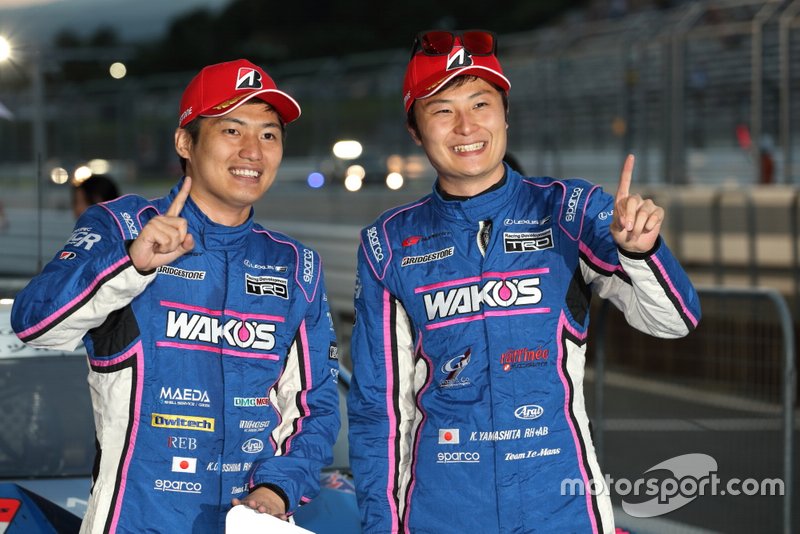 Against that backdrop, plans were drawn up for the Cerumo squad to expand to a second car in SUPER GT under the ‘Rookie Racing’ banner at the expense of Team LeMans.

The Rookie Racing brand – named after the former pet terrier of Toyota head honcho Akio Toyoda – first appeared in Super Taikyu last year, running a Toyota GT86 in the ST-4 class with Toyoda himself (using the nom de guerre ‘Morizo’) and his son Daisuke both appearing on the driver roster. This year it has expanded into a quasi-Toyota works team, running a version of the new GR Supra in the ST-1 class and a GR Yaris in ST-2.

But, despite the name, and a small amount of common branding (the blue, yellow and white camouflage motif of the Rookie Racing Super Taikyu cars can also be seen on the Wako’s-liveried SUPER GT machine), the two operations are fundamentally separate entities. The same applies to the Rookie Racing-branded Super Formula car, which is a third entry from Cerumo/Inging but with a crew composed mostly of newcomers.

Cerumo becomes only the second two-car team in the GT500 ranks after fellow Toyota squad TOM’S (although it should be pointed out the two Michelin-shod Nissans essentially function as a single entity). This has its benefits, but in the same way that Nick Cassidy said the two sides of the TOM’S garage were behaving like separate teams at the Fuji Speedway season opener, both Cerumo crews have also ploughed their own furrows on set-up.

“Now we are trying to make more of a good team, and every session we have meeting together with the #38 [crew] and we share data,” said Oshima. “But in pre-season testing, my engineer and the #38’s engineer have [chosen] a different set-up, not all the same.

“But for this season we have very short amount of practice time, and if we have two cars of data it’s good for us. Now the #38 and our car have different set-ups, and we saw the data until last year and they have a lot of wins here [at Fuji]. We need to check why they are quick here. But at the moment our car looks quicker than #38.” 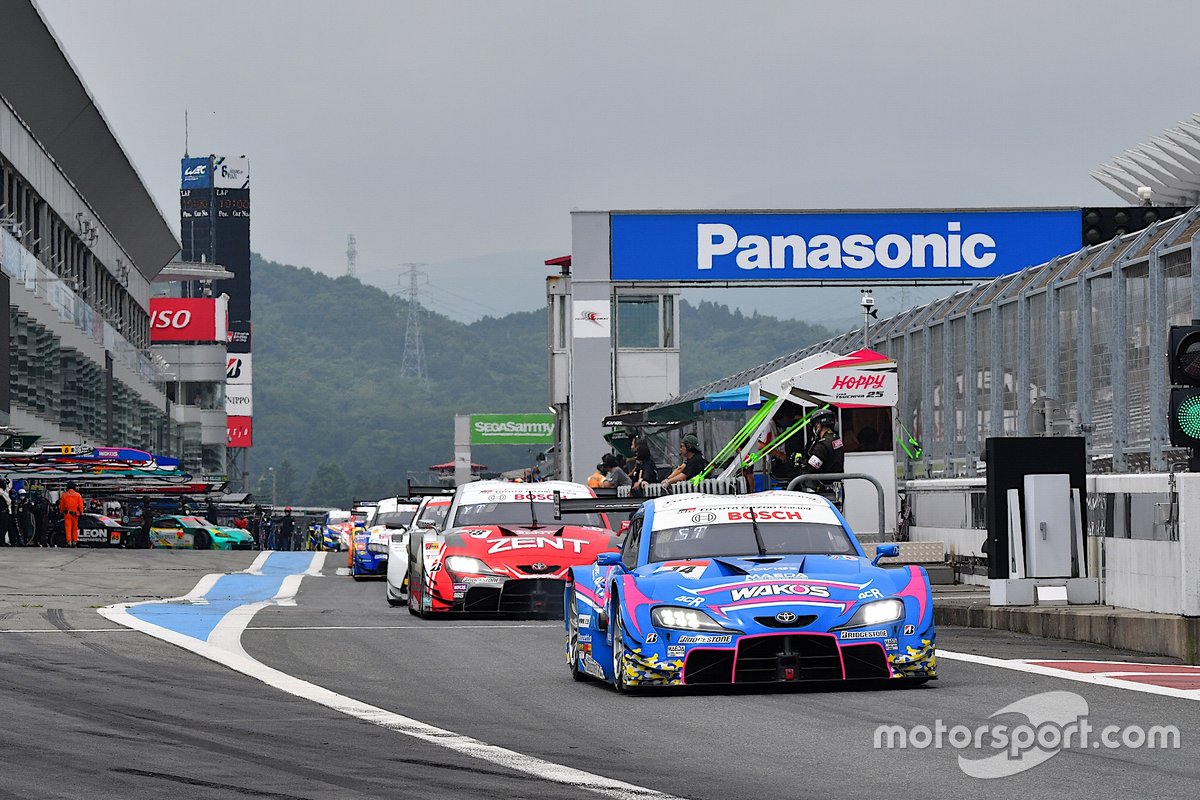 Indeed, the #14 car was the best of the Cerumo machines at the Fuji opener last month, with Oshima and Tsuboi beating their more senior colleagues in the #38 car, Hiroaki Ishiura and Yuji Tachikawa, to third place. That was despite starting all the way down in 11th – a legacy of the team not choosing enough hard tyres for the unexpectedly warm weather.

Tsuboi was at the helm for the second stint, which he began in sixth, before scything his way past the ailing Honda NSX-GTs of Tomoki Nojiri and Tadasuke Makino as well as Ishiura and challenging TOM’S man Yuki Sekiguchi for second in the closing stages.

For 25-year-old Tsuboi, this is his second season in the GT500 ranks but his first in a car on Bridgestone tyres capable of challenging at the front, having spent the 2019 campaign showing the occasional flash of promise in the Yokohama-shod Bandoh Lexus.

Asked for his opinion on whether Tsuboi can be as strong a teammate as Yamashita was last year, Oshima said: “Kenta has a lot of speed but Tsuboi is better for the set-up. He knows very well about the car and the set-up, his communication with the engineers is very good. I have confidence about him. Kenta was very good driver but Tsuboi is as well.”

Oshima and Tsuboi’s focus on long-runs for much of winter testing seems to have paid off, with Oshima describing the new GR Supra as “feeling very nice from the beginning” as a result of having a lot more front grip than last year’s Lexus LC500 – allowing the #14 crew to load up with rear downforce without compromising turning too much.

With that in mind, the target is clear: to ‘retain’ the crown he and Yamashita won for Team LeMans’ and get hold of the #1 plate that is conspicuously missing from the grid this year.

“Now we know which parts we need to improve, about set-up and strategy,” said Oshima looking ahead to this weekend’s second Fuji race. “Maybe we can be very strong. We have 22kg of [success ballast] which is not so much, so we will have a chance to win.” 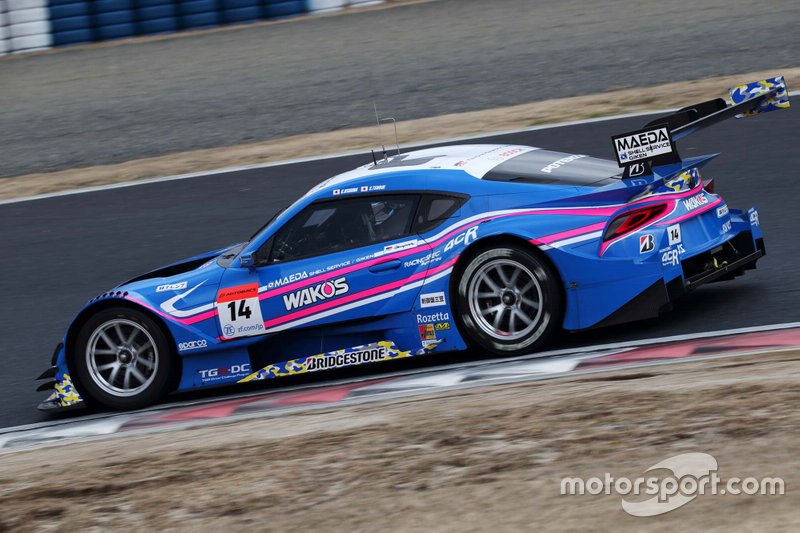