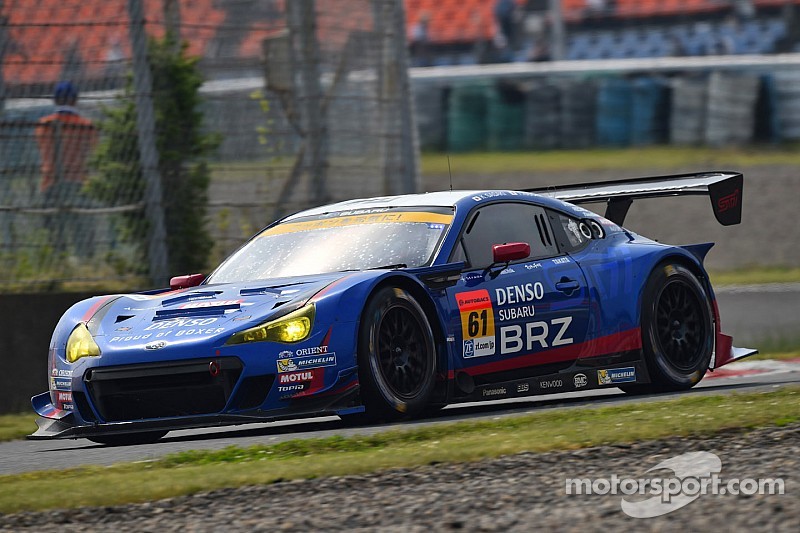 Qualifying is complete for the fifth round of the 2014 Autobacs Super GT championship at Fuji Speedway.

The qualifying for the FUJI GT 300km RACE, Round 5 of the AUTOBACS SUPER GT, took place at Fuji Speedway (one lap 4.563km) in Shizuoka Pref. on Aug. 9th. In the GT500 class, the No. 17 KEIHIN NSX CONCEPT-GT driven by Koudai Tsukakoshi and Toshihiro Kaneishi won pole position. In the GT300 class, the No. 61 SUBARU BRZ R&D SPORT driven by Kota Sasaki and Takuto Iguchi won the class pole. These two cars will start from the first position on the front row of their respective class grids for the race on Aug. 10th.

The SUPER GT qualifying is run in a 2-session (Q1 and Q2) “knock-out” format. It is a stringent type of qualifying in which only those cars finishing among the designated number of slots in Q1 qualify to compete in Q2 for the top grid positions. In the GT500 class, only the top eight qualifies of the 15 participating teams move on to Q2.

Despite fears about the effects of the approaching Typhoon #11 at Fuji Speedway, there were only moments of light drizzle with no significant amount of rain falling by the time the official qualifying started. The Q1 session of the GT500 class qualifying started on schedule at 14:15. In this session it was No. 39 DENSO KOBELCO SARD RC F (Oliver Jarvis) that recorded the fastest time of 1’29.986. Following in 2nd and 3rd positions were the No. 23 MOTUL AUTECH GT-R (Tsugio Matsuda) and the No. 18 Weider Modulo NSX CONCEPT-GT (Frederic Makowiecki), making for a Lexus, Nissan and Honda top three.

Up to this point the qualifying had proceeded smoothly, but just after the start of the GT500 class Q2 session rain began to fall heavily, quickly turning the track an ominous black. Because all of the teams had gone into the session on dry-condition slick tires, most of the cars began slipping on the now wet track, causing most of them to struggle to stay on the course and then opting to return to the pit to change to wet-condition tires. After the change their times began to improve. With less than one minute remaining in the session, the MOTUL AUTECH GT-R (Ronnie Quintarelli) ran a top time of 1’37.636. Then the RAYBRIG NSX CONCEPT-GT (Takashi Kogure) came very close to Quintarelli’s time with a 1’37.857 lap. Just as it looked as if the pole position had been decided, Koudai Tsukakoshi in the No. 17 KEIHIN NSX CONCEPT-GT made an all-out attack as the rain began to lessen and succeeded in beating the MOTUL AUTECH GT-R time by a mere 0.330 sec. with a time of 1’37.306, thus giving the Round 5 pole position to the KEIHIN NSX CONCEPT-GT.

For the GT300 class, the qualifying was over before the rain could have any significant effect. The Q2 session was so intense and close that the No. 61 SUBARU BRZ R&D SPORT driven by Kota Sasaki had run exactly the same time as the No. 31 OGT Panasonic PRIUS (Morio Nitta). However, in the last run, Sasaki succeeded in taking the pole position with a time of 1’38.256.

No. 17 KEIHIN NSX CONCEPT-GT [GT500]
Koudai Tsukakoshi: “I am happy to have won this pole position. The conditions were very difficult out there on the track, but the fact that I was able to do well in these conditions is proof of what a great team we have. From the morning practice, the car’s condition wasn’t bad. [When the rain started to fall] in Q2, I was debating whether to keep going on the dry-condition tires or go back and change to wet tires, but team manager Kaneishi trusted in me and decided to let me go on with the dry-use tires. His support and trust is what got us the pole position.”

No. 61 SUBARU BRZ R&D SPORT [GT300]
Kota Sasaki: “When I saw the ARTA CR-Z GT record the top time in Q, I thought it would be difficult for us to get pole position. But, listening to [Takuto] Iguchi’s comment, we adjusted the pressure in the tires, and form the start of Q2 the balance was good. Just after we started running in Q2 the rain started to fall and I thought, “Not again!” But, I was able to concentrate to the end and get the pole position. I am also happy that I was able to extend my record for most pole positions. I am really grateful to the team.”