Tsukakoshi in the KEIHIN HSV-010 wins a close battle to beat the champion! 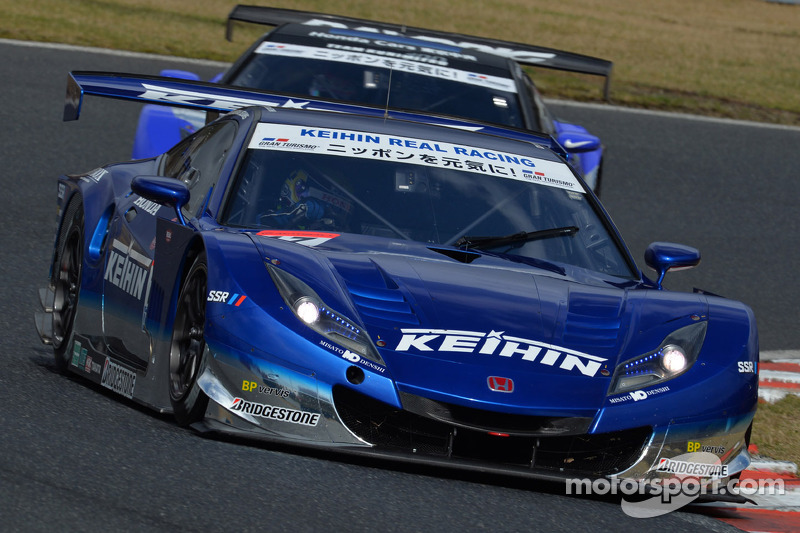 Today, the qualifying and Race 1 of the JAF Grand Prix SUPER GT & Formula NIPPON FUJI SPRINT CUP 2013, an event bringing together Japan’s premier racing classes, SUPER GT and SUPER FORMULA, took place on November 23 at Fuji Speedway (one lap 4.563 km) in Shizuoka Pref. Race 2 will be run on the 24th.

There were clear blue skies over Fuji Speedway from early morning, giving a fine view of Mt. Fuji. In the morning’s GT500 class qualifying sessions it was the No. 18 Weider Modulo HSV-010 driven by Naoki Yamamoto that won pole position for today’s Race 1 and the No. 6 ENEOS SUSTINA SC430 driven by Kazuya Oshima that took PP for tomorrow’s Race 2 with a course record time.

The No. 38 ZENT CERUMO SC430 continued to run at a strong pace into the middle stages of the race but gradually lost speed after that until it was eventually caught by two HSV-010 GT cars, the No. 100 RAYBRIG HSV-010 and the No. 17 KEIHIN HSV-010 (Koudai Tsukakoshi), which had moved up from a 5th-position start. The resulting 3-machine battle was later joined by the No. 18 Weider Modulo HSV-010, and from that point on it was closely fought race the four lead machines, where they often raced side-by-side in fierce contests.

Among the four, it was the bold driving of Tsukakoshi in the No. 17 KEIHIN HSV-010 that enabled him to pull away and run on to victory with a 3-second lead at the goal over this season’s SUPER GT Champion, the No. 38 ZENT CERUMO SC430. Finishing 3rd was the No. 100 RAYBRIG HSV-010.

The KEIHIN HSV-010 had finished the regular SUPER GT season ranked 2nd, without having won a single race. This added a sweet taste of consolation to the victory. The JAF Grand Prix will go to the team with the best combined point total from Race 1 and tomorrow’s Race 2. This puts the KEIHIN HSV-010 in the best position to win the 2-race Grand Prix.

In the GT300 class qualifying, the pole position for race 1 was won by Daiki Sasaki in the No. 3 S Road NDDP GT-R and the pole for Race 2 by his S Road NDDP GT-R teammate Kazuki Hoshino. Both won their qualifiers with course-record times.

In Race 1 (22 laps/100.386 km), the pole-sitting No.3 S Road NDDP GT-R (Daiki Sasaki) got a poor start and the lead was taken by the No. 35 NISMO ATHLETE GT-R GT3 (Alex Buncombe). However, the No. 35 NISMO ATHLETE GT-R GT3 suffered tire trouble in the late stages of the race that dropped it out of the competition for the win. Recovering the lead, Sasaki in the No. 3 S Road NDDP GT-R managed to hold off a challenge by the 11 GAINER DIXCEL SLS (Bjorn Wirdheim) to take the win. This was the first win of the season for a GT300 class Nissan GT-R, and for Sasaki it was his first win in the GT300 class.

Koudai Tsukakoshi (Race 1 - No. 17 KEIHIN HSV-010 [GT500]): “For some reason we were simply unable to get a win in the regular season this year, so we really wanted to win the JAF Grand Prix. I felt that we didn’t need any more 2nd-place finishes. I am glad that I was able to get this result and thankful to all the people who cheered for me. I lost a bit of ground at the start but I had confidence in the pace of my race laps. I was sure that in the second half of the race all my rivals would have trouble keeping up the pace, so I knew that if I kept in position to make a move for the lead when that happened I could win the race. So, I kept pushing to the end without giving up hope and that is what got me the win. I’m really happy.”

Daiki Sasaki (Race -1 No. 3 S Road NDDP GT-R [GT300]) “It was a tough season because we couldn’t get the results we wanted, but in this year’s final race we were finally able to get a win. I am grateful."