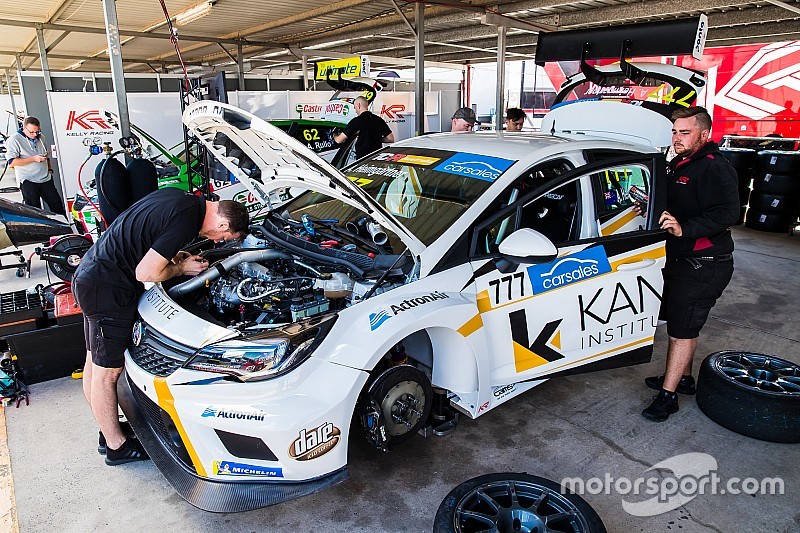 Andre Heimgartner has been withdrawn from today's two TCR Australia races after his Holden Astra suffered an engine failure.

Heimgartner, who switched from a Subaru to the Astra for this weekend, was running inside the top five during Saturday's opener when the car lost oil pressure late in the race.

Due to the engine being sealed and no spare being available, Kelly Racing has been forced to withdraw the Kiwi from the remainder of the meeting.

"If it was a normal Supercars situation we would have had the engine all over the floor last night, found the problem and then fixed it.," said team boss Todd Kelly.

"But because the engines are sealed you're not allowed to open it up and do anything. You can't touch it.

"We don't have a complete spare engine for the cars, so we'll have to get one air freighted over for the next round.

"It's frustrating, because it's probably something simple and easy to fix if we were able to get to it. So Andre's had to get on a flight on Saturday night for the second weekend in a row."

The failure comes while an engine specialist from Germany is on the ground helping the squad with a persistent wiring issue.

"It's difficult [to diagnose the problem] from the other side of the world," said Kelly.

"He's been saying 'if I was there I could open it up and tell you straight away what the problem is'. So unfortunately we had no choice but to fly him and his laptop out from Germany to plug into the car and tell us.

"We've isolated where we think the problem in the wiring loom is now, so we can go back and make modifications and hopefully fix that for good."

According to Kelly, it's still not clear if or when Heimgartner will move back to the Subaru, given that Chelsea Angelo is expected to take over the Astra again for Winton later in the month.

"I think an engine [for the Subaru] has just arrived a the factory," he said. "But there's been quite a few issues with that car, and because it's homologated we can't go and fix it.

"So we're almost at the point where we need to decide whether we just start fixing the car and run it not for points, or try and patch it up and go again. But it's a high workload, you need to take a lot of bandaids to an even at the moment with those cars.

"Molly [Taylor] can't do the last few round because they clash with rallies, so it might all fall into place that Andre jumps into that car. We're not sure yet."

Today's two races from Queensland Raceway can be streamed live and free from anywhere in the world via Motorsport.TV.