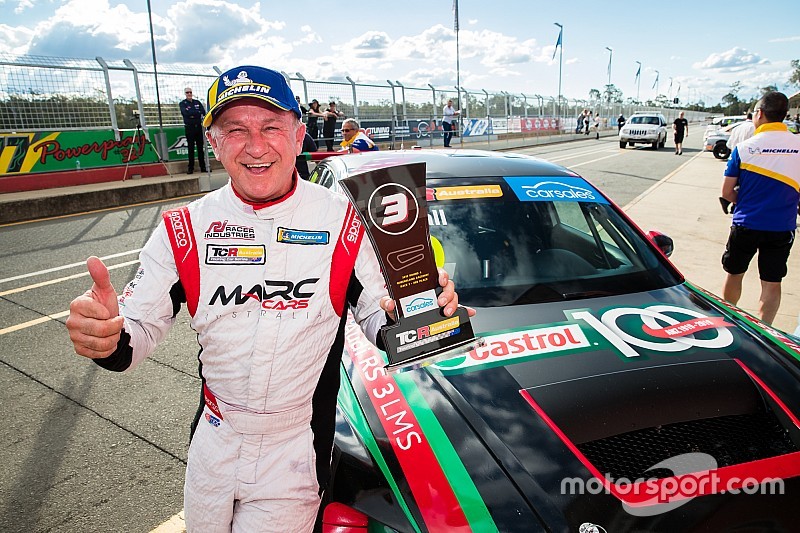 Russell Ingall says he's found TCR cars to be 'edgier' to drive than a Supercar during his two-round TCR Australia cameo.

The 2005 Supercars champion enjoyed a sensational second hit-out in a Melbourne Performance Centre-run Audi in Queensland over the weekend, banking three podiums from the three races.

Reflecting on his transition to TCR hardware, given his background in big horsepower rear-wheel-drive Supercars, Ingall says he's found the cars to be more on edge than what he's used to.

"They are a much different toy [to a Supercar]," said Ingall.

"There's no comparison against what I've driven previously. You've got to get rid of a few habits and gain a few as well.

"When I think of a Supercar, there's a lot of leeway there. If you make a mistake, you can collect it up or you've got enough power to get you out of trouble.

"In these you make a mistake, it punishes you.

"These things bite you hard. If you're a little bit off line, you're gone. So the concentration factor is immense, a lot more than other categories."

Ingall reckons that between the razor edge driving style and the depth of talent in the field, there's an opportunity for any car to be in contention for a top result at any time.

"The level in this category is very very high, I mean, we're pushing on," he said. "Which bodes well for the championship, because I think all the way down the field there's talent, and there's unpredictability.

"That's the good thing about it. At any one time, a team, a driver, a car can get up there. How many categories do you see that around the place?

"I enjoy that. I enjoy that you can go into a race and half a chance of getting a trophy. It makes racing enjoyable."

Working on a round-by-round basis, Ingall says he'd be happy to return to the MPC squad for Winton should there be a spot for him.

"For sure, but it's not my call at the end of the day," he said. "I'm sure there will be some phone calls and chat."