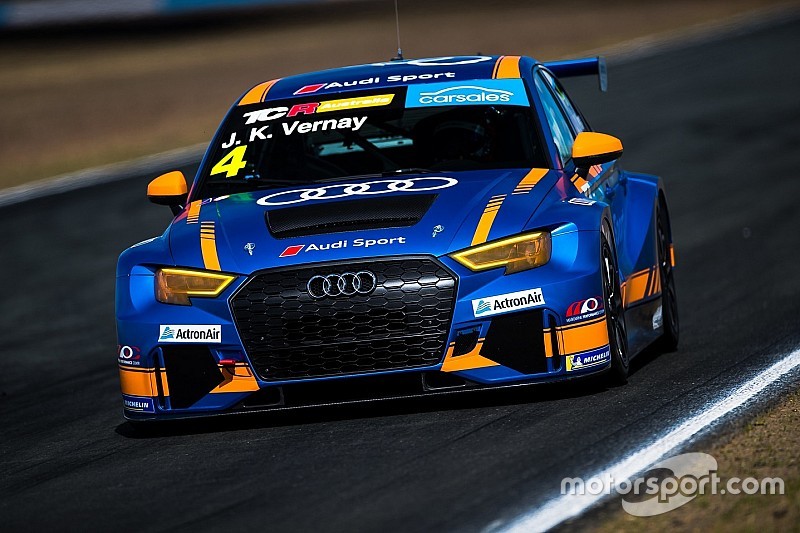 Jean-Karl Vernay dominated the opening TCR Australia race at Queensland Raceway, as series leader Will Brown finished last thanks to a first-lap off.

Vernay (Melbourne Performance Centre Audi) made a quick getaway from pole, pulling 1.8s over the field in the first two laps.

That early advantage was then nullified by the Safety Car, called while debris was cleared from the final corner.

Following a Lap 5 restart the Frenchman was able to comfortably gap the field again, setting up what would ultimately be a 7.9s win over Dylan O'Keeffe (Ash Seward Motorsport Alfa) and Russell Ingall (MPC Audi).

"The car was great," said Vernay. "I was really focused on getting a good start. I'm very happy, the racing was very good. I think it's a great way to start."

Behind the leader there was plenty of drama, particularly in the early phase of the race.

Runaway points leader Will Brown ruined his race by tangling with Wall Honda driver John Martin at Turn 6 on the opening lap, which left his HMO Hyundai with wheel damage.

He then shortcut the track on his way to the pits which led to him getting black flagged, the net result a lowly 16th position.

Martin, who started on the outside of the front row, went off at Turn 4 on the second lap thanks to that contact with Brown and dropped to the back of the field.

Martin's teammate Tony D'Alberto then spent the majority of the race running second, only to run wide between Turns 4 and 5 with three laps, which dropped him to fourth.

Alex Rullo finished eighth, and was the only Kelly Racing Astra to see the chequered flag thanks to Andre Heimgartner's engine expiring late in the race.