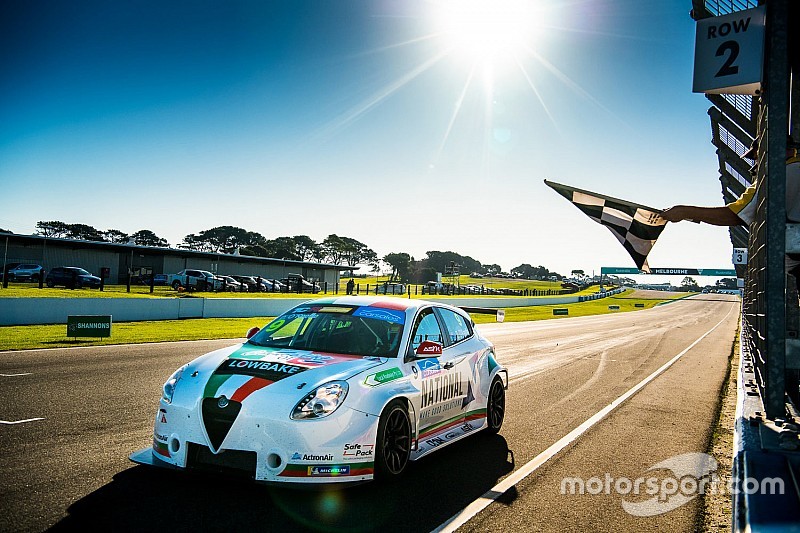 Dylan O'Keeffe left a wild battle for the minor places behind him as he dominated the TCR Australia opener at Phillip Island.

The Ash Seward Motorsport Alfa Romeo driver was in a class of his own across the shortened 13-lap race, coming home with a 4.9s margin over the field despite having to deal with two Safety Car periods.

O'Keeffe was the big winner at the start, charging into the lead on the run to the first turn as Will Brown, starting on the outside of the front row, struggled to get away.

Things would quickly get worse for HMO Hyundai driver Brown, who ran wide at Southern Loop while squabbling with Tony D'Alberto (Wall Racing Honda) and dropped to the back of the field.

By the end of Lap 1 the Safety Car was out, Brown's teammate Nathan Morcom left beached after being hit by John Martin's spinning Honda.

The drama continued after the restart, with Jason Bright (Alliance VW) running Garth Tander (MPC Audi) wide at Turn 1 on Lap 5 as they scrapped over third place.

That allowed Andre Heimgartner (Kelly Racing Subaru) to sneak into third, but a lap later he copped a hit from Bright on the way out of Southern Loop which sent the pair into a spin.

Jimmy Vernon did his best to profit from the tangle, but instead found himself caught up in it, his GRM Alfa tipped into the Turn 3 gravel.

That sparked a second Safety Car, with O'Keeffe leading from D'Alberto, James Moffat (GRM Renault) in third, and Brown, remarkably, back into fifth.

For the second time O'Keeffe had little trouble sprinting away at the restart, pulling a 3s gap inside two laps.

D'Alberto lost out at the restart, however, swiftly dropping back to fourth behind Moffat and Brown.

While O'Keeffe continued to sprint, Moffat and Brown staged a thrilling battle for second. It came down to a remarkable last-lap, side-by-side showdown through the Hayshed, Brown managing to complete his turnaround and get back to where he started.