Australian Rally champion Molly Taylor has labelled her TCR Australia debut a "baptism of fire" and says she is "relearning everything" as part of her circuit racing transition. 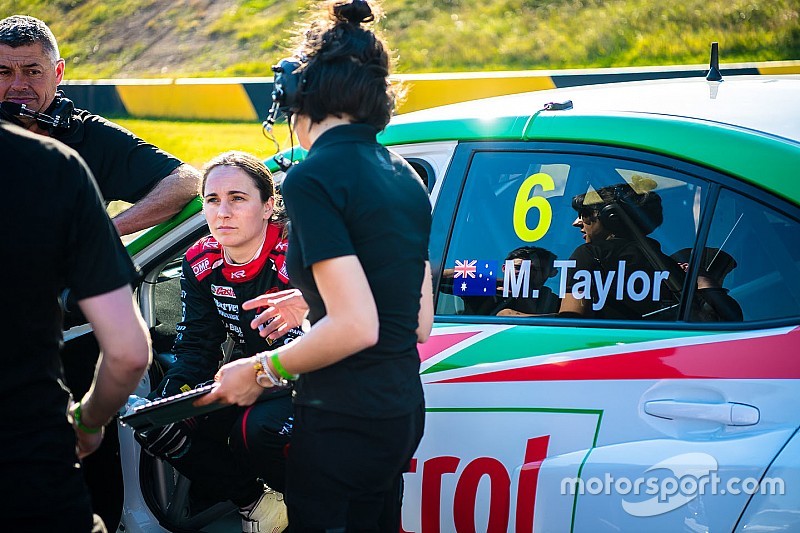 It started with a persistent gearbox issue for KR's two Subarus, although Taylor's teammate Andre Heimgartner was more affected by that, and continued with a spin on the first lap of the first race.

She finished 15th in a trouble-free second race on the Sunday, followed by a puncture in the finale.

"I mean, I knew it was going to be a baptism of fire," she said.

"[Saturday] certainly was that, obviously having the spin on the first lap and then being a bit in no-man's land, and then broke the rear anti-roll bar into the race as well. That was the one I had to get through, I think.

"And then [race two] felt heaps better and my race pace was what I was qualifying at, so it was really encouraging to see that.

"I just need to obviously learn how to maximise that with a bit of race craft, so that's still to come."

While not entirely to driving front-wheel-drive cars, having rallied them for much of her junior career, Taylor said she still feels like she's undergoing a ground-up learning process.

"I mean, it's all so different," she said. "I think obviously there's car control that carries over, but in terms of the technique and everything, it's so, so different.

"I feel like I'm relearning everything and I feel like the more I do in the car, the more it's all coming together.

"For me it's good to have Andre as the benchmark and he's going to know exactly how to drive it, and at the moment I'm trying to figure that out myself, so then in terms of setting up the car, I think there's still more in me first.

"The first thing is getting the most out of the car on the track, and just the driving style.

"On gravel you're using the weight of the car a lot more, and then you're kind of on the throttle or on the brake and there's not much in between. You're trying to manipulate the balance of the car to help the car rotate.

"Whereas here, when you have so much grip, a lot of the time you're just doing little inputs and being patient and relying on all that grip you have.

"My tendency's to try and almost over-drive the car and get it to turn and throw it around, which obviously's not quick on a circuit, so that, I think for me in the fast stuff, really getting that balance and that feeling and just knowing that it's okay to just do little inputs and then let it go.

"If you were in sixth gear and you just eased off the throttle slowly and turned in in a rally car, you'd be in the trees in a second."

In other TCR Australia news, the series has announced TV viewing figures of 100,000 for its live coverage on free-to-air channel SBS.

Discussions underway for WTCR round at Bathurst