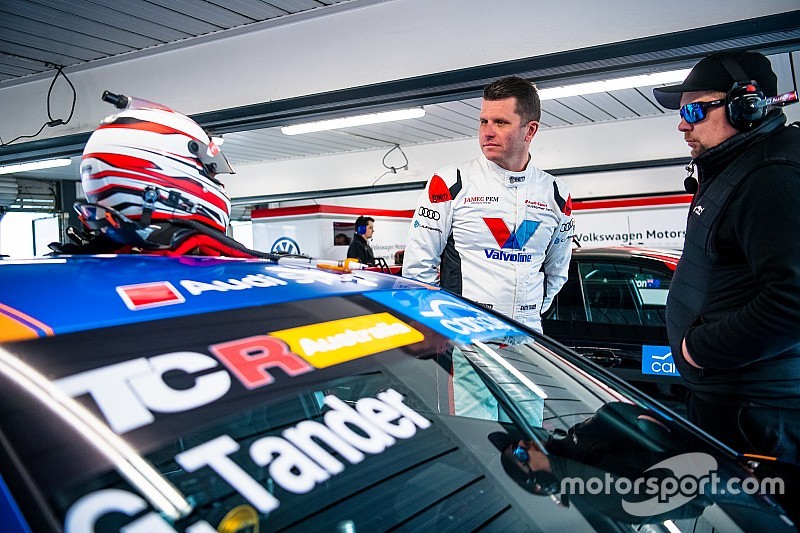 However it wasn't plain sailing for the three-time Bathurst 1000 winner, who came unstuck early in the session at the famously almost-flat first right-hander, leaving the circuit backwards at speed.

He light-heartedly blamed the incident on some questionable advice from fellow TCR Australia drivers John Martin and Jason Bright, as well as a poor decision to try and use the throttle to drive out of trouble mid-corner.

"I spoke to John Martin and Jason Bright before the weekend, and they told me they were flat through Turn 1 at Sydney Motorsport Park on a qualifying lap," said Tander.

"I didn't try and go flat through Turn 1 at Phillip Island, but I did try and go a lot faster than I did the lap before.

"It didn't work. I lost it, and then I remember the vision of Andre Heimgartner just standing on the gas and pulling it out [of a spin] at Turn 4 in Sydney, so I thought 'I'll do that', but it was too far gone and around I went.

"I spun the GT car there last year, and this was way bigger than that. It took me about a minute and a half to get back on the track at Turn 2, so it was a big one.

"I didn't hit anything. But I was going that fast backwards that a rock smashed the rear vision mirror."

Tander added that exploring the limit through Turn 1 will ultimately come in useful as he continues to familiarise himself with the workings of a front-wheel-drive racing car.

"You won't find the limit if you don't go past it every now and then. I found the limit early. Now I know what to do."

He and wife Leanne, both driving brand new Audis, enjoyed a tyre advantage throughout Friday practice thanks to not having started their respective banks in Sydney last month.

Tander reckons that explains why he was quickest in practice one despite not feeling comfortable in the car.

He was impressed with Leanne, however, who was just nine-tenths slower than Garth in that opening session.

"She's far more conservative, she works up to it a lot more," said Tander. "Whereas I tend to just go straight off, like I did at Turn 1. She's a lot more methodical, she's been like forever.

"I thought this morning she did a really good job, she was only nine-tenths behind me in that first session. And then she probably tried a bit too hard in that second one and didn't get a gain.

"But she'll be amongst it. My goal is to run right at the front, and her goal is to run at the back of the lead pack, so I think she'll probably be there."

The Phillip Island weekend continues with qualifying and the opening race tomorrow.

Watch all of the TCR Australia action live and free on Motorsport.TV.