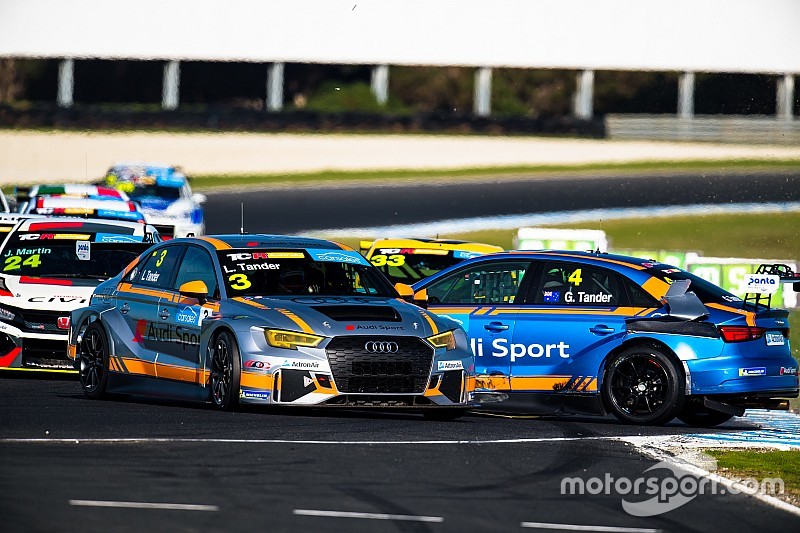 Garth and Leanne Tander will return to the TCR Australia grid at The Bend this weekend.

The pair have landed fresh one-off Audi deals, driving the same Melbourne Performance Centre-run RS 3s that they made their TCR debuts in at Phillip Island last month.

It was a spectacular first outing for both of the Tanders at the Victorian circuit thanks to an awkward collision on the opening lap of the first race, which also involved their MPC teammate Aaron Cameron.

According to three-time Bathurst 1000 winner Garth, his aim for his second appearance is to qualify better and avoid the rough-and-tumble in the midfield.

“At Phillip Island, I feel that we didn’t realise the potential of the car, especially in qualifying,“ said Garth.

“We didn’t qualify where we really needed and that put us amongst the mid-pack.

“There were some cool battles along the way, and some really great racing, but it wasn’t until the last race that I felt like we maximised the car.

“I know The Bend circuit really well because I raced there last year – both in Australian GT and the Supercars round.

“I feel that the TCR cars will suit the track quite well. The TCR Audi will have more corning speed than the Supercar, but compared to the GT car it doesn’t have the braking capabilities, so it’s going to be a really nice compromise.

“The big long front straight will make slip streaming very interesting. I reckon they’ll be some big passing moves at Turn 1. And the fast section over the back will be exciting – the triple right-hander will mean there’ll be a lot of action there.”

Former Australian Formula Ford champion Leanne says that she's hoping to use a second TCR outing as a springboard for a full programme in 2020.

“I didn’t get the most out of my car in qualifying, so that will be my main focus to get the ball rolling for the weekend.

“I’ve been working hard behind the scenes to get more drives in TCR. My focus has been on putting together a full programme for next year, so to get these extra laps this weekend is very valuable for the future.”