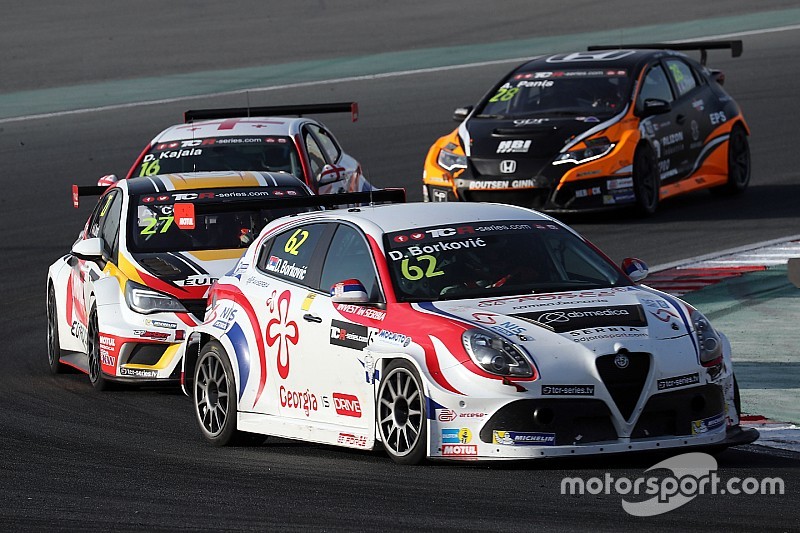 The tenth and last round of the International TCR Series, held in Dubai, yielded a solid and consistent result performance by the Alfa Romeo Giuliettas TCR by Romeo Ferraris. The cars built at Opera and managed on track under the banner of GE-Force have reached the top-10 in both races, proving that the technical evolution of the cars throughout the season has allowed Davit Kajaia and Dusan Borkovic to fight consistently for top positions.

At Dubai, on a tight 2-day event format, the team started free practice on the basis of the data collected during the TCR Middle East round earlier this year (where Michela Cerruti, at the time in her driver capacity, clinched a podium finish), although the track configuration was not the same. Despite a difficult qualifying, where Borkovic was 16th and Kajaia 20th, both Giuliettas scored points in the two races.

The Serb was 8th in both occasions, while the Georgian collected a 9th and a 10th. This brought Borkovic to finish 8th in the standings, with 118 points, while Kajaia concluded in 11th, with 77. Among teams, GE-Force is sixth, with 196 points.

Michela Cerruti, Operations Manager Romeo Ferraris: “A very intense season comes to an end. Time seems to have flown since we started to work on this car, not without challenges, a couple of years ago. Romeo Ferraris has proven to be an engineering able to compete with giants much bigger than us, and we are proud to have conquered three wins and podium positions, thanks to the efforts and passion of the entire team. I thank Davit and Dusan for their incredible season, and all the boys that worked on track and at the factory. Now we have ahead of us a busy winter, to prepare the 2018 season of the TCR International and seize the opportunities arising in Asia and America, two markets where there is an increasing interest for touring car racing”.