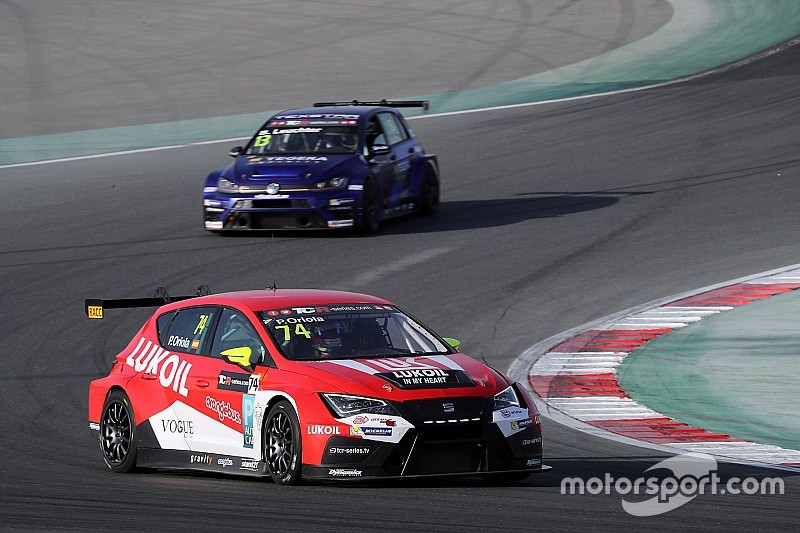 Lukoil Craft-Bamboo Racing scored a brilliant victory during the final round of the TCR International Series at the Dubai Autodrome, with Pepe Oriola making a stunning start to capture the lead and maintain his position to the flag. James Nash also made a blindingly quick start and was able to launch his #54 SEAT Leon from P11 to P4 by flag fall.

Daniel Lloyd was quickly making his through way the field but was forced out of the race by contact and with the damage sustained to the chassis, Lloyd was unable to take part in race two. Oriola made another good start in race two but came together with the Hyundai of Gabriele Tarquini, ending his race on the first lap.

Nash was on his way to another good result but with contact at the start and a slow puncture slowing him down, he finished the race in P11 but was classified P9 on points with the two Hyundais ineligible to collect them. This hard-fought finish was instrumental in Lukoil Craft-Bamboo taking second overall in the teams’ championship with a margin of two points.

Richard Coleman, CEO of Craft-Bamboo Racing: “Delighted to win another race in the TCR International Series, which is a nice signoff from what has been a difficult season at times. James Nash also had a very strong weekend, driving from P11 to P4, so credit to him for his resolve. Very unlucky for Daniel to have another double DNF and when you look at the onboard, there really wasn’t much he could have done. There is lots of positive news about the championship next year and we look forward to a winter of hard work to get us back up to the top step, having been the bridesmaid this year.”

Daniel Lloyd, #17: “I had a bit of a poor start but was making up places through the field when I was braking into the chicane and got wiped out by Roberto Colciago. He didn’t really brake for the corner, which is what we saw on the footage with the stewards, so it was a poor way to end the season.”

James Nash, #54: “We were working the car really hard to get any positions. In race two I had a lot of contact and a slow puncture from around the half-way distance, so I was really lucky to finish. The contact at turn one in the second race was disappointing because without it and the puncture of course, we could have managed the same as race one, which was a good result. I’d like to thank everyone at Lukoil Craft-Bamboo Racing, my sponsors, family, friends and fans for their continuing support and encouragement. I look forward to returning next season when we start with a clean sheet and hopefully deliver the success our endeavours and support deserves.”

Pepe Oriola, #74: “I was really happy with the pace in race one, especially with my start, as it was the best I have had all year. To win in the final round was fantastic and the car was great. It was a pity I got touched in turn one of race two as I thought third position in the championship was possible but after that, it was not. I am happy with the end of the season, happy with the engineering side and with the team. It was a really good end to the season, we showed that we had the pace to fight and I hope to get a better result next year with the team.”