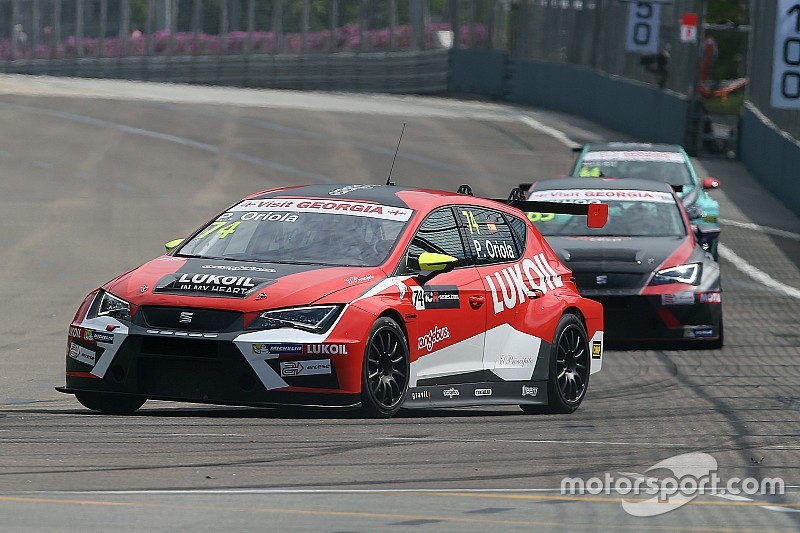 Pepe Oriola fought hard in race one under the floodlights to move up the field and snatch a third place podium. Nash finished the race in P5, followed by Sergey Afanasyev in P6, both collecting valuable points for each championship title in the process. Race two was a little more difficult, with Afanasyev forced to retire after contact sent him into the wall and out of the race. Oriola was handed a harsh drive through penalty after contact with Gianni Morbidelli, ruining his chances of scoring any points and hurting his championship chances in the process. Once again though, it was Nash who proved how important it was to be consistent, moving from P5 to P3 early on in the race and maintaining his position despite the continued attacks from behind. Nash was given some respite though, with two safety car periods helping to keep some of the competitors at bay just long enough for him to claim P3 and take his ninth podium of the season.

Oriola did his best to catch up but finished P14, unable to claw back the time lost by the penalty. Nash now leads the drivers’ standings with 229 points, while his teammate Oriola is 16 points behind in third place. Afanasyev is ninth in the standings with 133 points and Team Craft-Bamboo Lukoil still maintains a significant gap of 89 points in the teams’ championship.

Oriola managed the fastest time of the trio in P5, even while carrying the extra 20kg of success ballast. His previous experience helping him to set a lap of 2:25.887s around the Marina Bay Circuit.

Nash recorded a time of 2:25.899 that would see him start P6 on Saturday. This was another great qualifying performance from the #54 driver, given it was his first time in Singapore and had to contend with 30kg of success weight.

Afanasyev just missed out on a front row start for race two after scoring P8 with a 2:26.069, but this still put him in a strong position for the start of Sunday’s race two.

Saturday’s night race began as the five lights went out at the Marina Bay Circuit and all three Craft-Bamboo Lukoil cars got off to a good start. Oriola and Nash jostled for position heading into the first corner, followed very closely by Afanasyev. After the gird had shuffled into place, it was Oriola in P3, Nash in P5, and Afanasyev in P6 by the end of lap one. Stefano Comini was ahead in P2 and the Oriola began his chase to close the gap on his season rival. By the race’s mid-point, Oriola had managed to gain some ground on Comini but was unable to get within reach to make a move.

Nash was still running strong in P5 and had managed to gain a slight lead over his teammate, Afanasyev, who was defending from Dusan Borkovic in P6. The trio of drivers continued their push, and by lap nine Afanasyev had managed to close in on Nash and break away from Borkovic. After driving a clean race and pushing his SEAT Leon to the limit, Oriola crossed the line in P3 for a crucial podium and championship points haul. Nash wasn’t far behind and finished in P5, followed by Afanasyev in P6, both collecting valuable points for the drivers’ and teams’ championship campaign.

"I just focused on making sure I avoided mistakes and lock-ups, especially as we really were pushing the tyres to their limit with all the success ballast that I was carrying. It was a solid result, given my first time at the circuit and picking up the points from P5 will go a long way to keeping me in the running.”

“There was nothing I could try against Vernay and Comini; their cars were so much faster, especially on the straights. I could only hope for some mistakes from them, which did not come. The situation in the standings is even closer now, and I am happy with this. We know that everything will be decided in Macau.”

“I made a good start and was able to have a fun battle with Borkovic before being able to catch my teammate over the course of the race. Knowing that he is going for the drivers’ title, I didn’t want to risk anything towards the end but we were close and had a good race together.”

Sunday’s race two got underway in the scorching afternoon heat and all three Craft-Bamboo Lukoil cars were off to another fine start. Afanasyev retained his third place starting position, as did Nash in P5. Oriola was squeezed out and dropped back one place to P7 during the first corner tussle. Their positions remained the same until lap three when Afansyev made contact with Attila Tassi while attempting to defend. This turned Afanasyev around and careened him head first into the wall, ending his race and bringing out the safety car.

Two corners later, Oriola would make contact with the rear of Gianni Morbidelli, dropping them both a few places down the order. The stewards would later give Oriola a rather harsh drive through penalty for his actions, ruling him out of a comeback and preventing him from scoring any points in race two. The safety car period finished on lap six and Nash was now up to P3, but by lap seven he was starting to feel the heat from the lighter VW of Comini. An incident between two competitors resulted in another safety car period towards the end of lap seven.

The safety car remained on track as the clock ticked past the 25 minute race limit, leaving the positions as they were. Nash had managed to score a third place podium despite his 30kg of ballast, allowing him to retain his lead in the championship that he gained in Thailand. Oriola is now 16 points behind Nash in third, while Afanasyev is ninth with 133 points. Team Craft-Bamboo Lukoil still retains a dominant lead in the teams’ championship, sitting 89 points clear of second place.

“The safety-car periods definitely helped as they broke up the otherwise fast pace of the race, which given I was running a lot heavier than all the others, I could hardly stand. The race two podium is a bonus because we knew that with the extra weight I was carrying the weekend was going to be tough so I'm really pleased to have come through with a pair of good results."

“Little bit disappointed with the decision of the stewards but racing is like this and I must accept the penalties. We just need to move on and look forward to the races in Malaysia to take back the championship lead, which is my main objective.”

“Race two was disappointing because I was in such a good position and there could have been a possibility for a podium. It was just a racing incident but certainly not the way I wanted to end my weekend. The team and my crew have been amazing as usual, so thank you to them.”

“We knew this weekend was going to be difficult with the extra ballast and high temperatures, so to walk away with two podiums and have James Nash leading the drivers’ championship again is fantastic. The entire team did a great job this weekend and we are now focused on the next two races in Sepang to get us in the best possible position for Macau in November.”

TCR returns to Sepang 18 months after the inaugural event