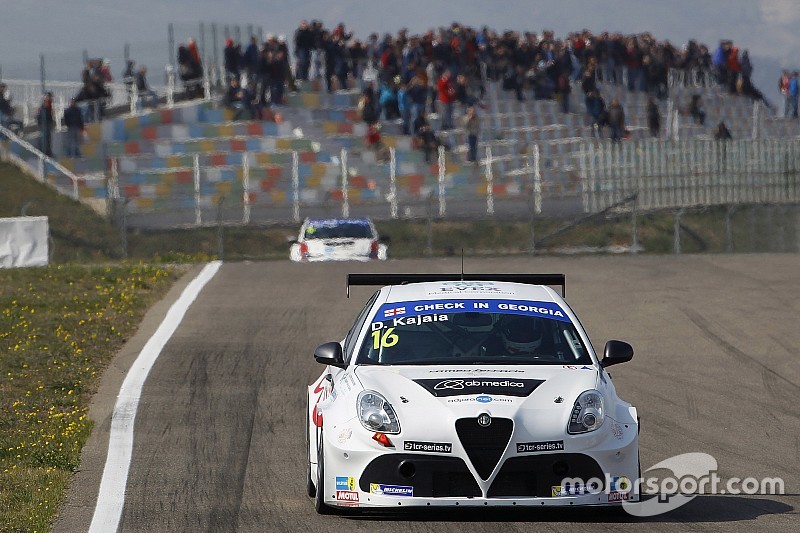 The local hero posted a lap time of 1:40.693, in the Romeo Ferraris-built the Alfa Romeo Giulietta

Davit Kajaia claimed his and the Romeo Ferraris-built Alfa Romeo Giulietta’s first pole position in the TCR International Series with an impressive performance in Q2 at Rustavi. The local hero posted a lap time of 1:40.693, to the joy of Georgia’s motorsport fans who are expected to flock to the track tomorrow to cheer for him.

Earlier today, Kajaia proved to be among the fastest drivers, fighting with Hungarian youngsters Attila Tassi and Ferenc Ficza for the top positions in the two Practice sessions.

In Qualifying he made a flawless job, advancing beyond Q1 with the third fastest lap behind the pair of M1RA Honda Civic cars of Roberto Colciago and Tassi. Then, Kajaia annihilated the field in Q2, being the only driver to complete a lap under 1:41.00

Tassi and Ficza qualified in second and third, with Jean-Karl Vernay fourth in the Leopard Racing Volkswagen Golf GTi. Colciago will share the third row of the grid for Race 1 with reigning champion Stefano Comini, who was sixth in the Comtoyou Racing Audi RS 3 LMS.

Giacomo Altoè qualified his WestCoast Racing Volkswagen Golf GTi in tenth position and so will start Race 2 from pole thanks to the reverse grid, with Pepe Oriola (Lukoil Craft-Bamboo SEAT León) alongside him.

The first race will start tomorrow at 13:35 local time, with second one following at 15:35.

The M1RA Honda Civic Type-R cars of Colciago and Tassi led the field in Q1, after an exciting escalation of improving lap times that lasted throughout the twenty minutes.

Kajaia opened the hostilities with provisional fastest laps of 1:42.731 and 1:42.252; the Georgian then had a further improvement (1:42.096) disallowed for trespassing track limits. The same penalty hit several other drivers, namely Comini (three times), Oriola, Ende and Tassi.

Also on his last lap, Altoè improved from 12th to 7th, while the Lukoil Craft-Bamboo trio of Oriola, Nash and Valente filled the last three positions (10th to 12th) that gave them access to Q2. Borković was the first driver to miss the cut, as he was sidelined by a steering rack failure.

With three minutes to go, Kajaia stopped the clock at 1:40.693, a new lap record for the TCR cars at Rustavi International Motorpark, which meant pole position for the delighted Alfa Romeo driver. Just before the end, Vernay and Colciago advanced to fourth and fifth.

Once again, several drivers - Nash, Valente and Altoè - had lap times disallowed for infringing track limits, while Morbidelli went off and beached his car onto the gravel trap at Turn 4.

What the fastest drivers said after Qualifying

Davit Kajaia (pole positionI: “It’s an amazing feeling to be on pole and I am obviously very proud to achieve my first pole here at home, in front of my fans and all the people who support me. I really want to thank everybody in the team for their great work. The car seemed to fly and the changes we made after free Practice 2 worked beautifully. I did not expect such a gap, although I must say that I really put all my heart into my fast lap.”

Attila Tassi (second fastest): “I am obviously happy of this second position, everything went very well and honestly, I didn’t expect to be in first row, nor faster than my experienced teammate Colciago.”

Ferenc Ficza (third fastest): “It has been an amazing start of the weekend and I am both surprised and happy about my performances. I was already happy being here and part of the TCR, so the good results are a bonus. In Q1, I did a couple of small mistakes, but still, third fastest is great. And it’s nice to have two Hungarians in the top three.”

More quotes after the Qualifying session

Michela Cerruti, GE-Force / Romeo Ferraris: “I can’t describe what this pole means for the whole team, after all the hard work we have put on this project. We couldn’t believe what we were seeing on the screens and are, of course, very happy. We realized during the TCR Middle East Series that we were heading upwards, after all the development work done during the winter, but this exceeded any expectation. To clinch the pole here in Georgia, the home of Davit and our sponsors, adds an emotional spin. It is so important for our Georgian partners and the entire country… Davit has been simply fantastic. It is true that he knows the track inside out, but still, he did a terrific job and gave everything he had, despite all the pressure on his shoulders. I must admit he is impressing me in the way he approaches things: he works a lot, listens and he’s able to improve all the time.”

Jean-Karl Vernay (4th fastest): “We have progressed well and I am happy with the car. In Q2, it turned out that I had a broken bearing, which probably cost me a couple of tenths, but even without it, I don’t think I could have done better than third. The Alfa seemed unreachable…”

Mat’o Homola (12th fastest): “We progressed throughout the session and that was promising, it means we are improving step by step. Unfortunately, Q2 wasn’t that good, the changes we made were not effective. We still improved something, but less than our competitors. We need to work more on the set-up, but it’s a good start, if we keep in mind that this is my first real time with the Opel.”

Gianni Morbidelli (7th fastest): “I am very happy with the work done, we are progressing and going in the right direction. Given that this is our first time with the Golf, being only one tenth behind Vernay, who is our reference, is very positive. For sure, I could not have gone faster today; I was at the limit and went even beyond once, when I lost the car in a breaking point and finished in the gravel.”

Giacomo Altoè (10th fastest): “It was a good session and I am happy with the result, although I think we can and we have to improve the set-up. One of my lap times was canceled because of track limits, but luckily, it wasn’t my best time. Starting in pole for Race 2 is nice but also a big responsibility.”