Norbert Michelisz on pole for his home races 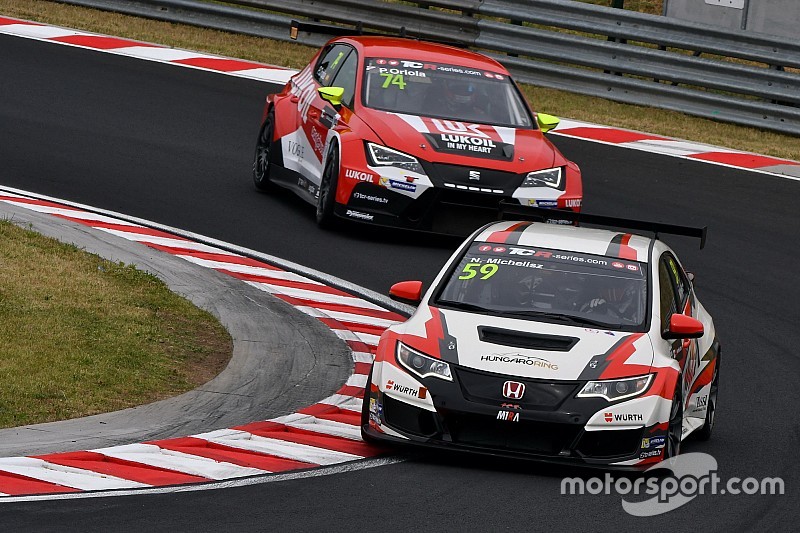 Norbert Michelisz’s pole position at the Hungaroring was eagerly anticipated, especially since he had been fastest in both the Free Practice sessions.

Unsurprisingly, Michelisz did not let his fans down. After being stripped of the fastest lap in Q1 and finishing behind Jean-Karl Vernay, Hungary’s sports hero responded by setting a new lap record for the TCR cars of 1:52.740.

For a brief moment there was an all-M1RA front row for Race 1, as Attila Tassi had posted a provisional second fastest lap behind his ‘boss’, but Vernay spoiled the party with a lap of 1:53.354.

Mat’o Homola placed his Opel Astra fourth, ahead of Pepe Oriola’s SEAT and Roberto Colciago in the third M1RA Honda. Rob Huff and a brilliant Stian Paulsen ranked seventh and eighth, while Daniel Lloyd had his ninth fastest lap disallowed for not respecting the track limits.

This promoted the WestCoast Racing duo of Gianni Morbidelli and Giacomo Altoè to ninth and tenth, which means that they will fill the front row on the top-ten reverse grid for Race 2.

Today’s Qualifying was extremely disappointing for the Audi and Alfa Romeo drivers, as none of them managed to even make the cut for Q2.

After a frustrating start in this morning’s Practice 2, Ferenc Ficza completed his first laps in the brand new Zengő Motorsport KIA cee’d. It was, however, just a shake down for the Korean car that has still to show its potential.

The first race will start tomorrow at 09:10 local time .

Vernay was the very first driver who was able to be faster than Michelisz since TCR action began at the Hungaroring. The Frenchman and his Volkswagen Golf posted a fastest lap of 1:53.030 in the dying moments of Q1. On his last lap, Michelisz improved as well, but not enough; he settled into second position with a lap of 1:53.209.

The Hungarian actually posted the fastest lap (1:52.847), however it was disallowed for exceeding track limits. A number of other drivers were hit by the same penalty for the same infringement.

Tassi was third with a lap of 1:53.067 that had provisionally placed him on top of the time sheet after Michelisz’ penalty and before Vernay’s final effort.

Møller and Paulsen did a great job, advancing to Q2 for the first time, while Vesnić was soon sidelined by a technical problem.

Homola was the fastest after the first flying laps, with a time of 1:53.495. However the ten-minute segment was red-flagged around halfway, when Møller made a mistake while braking into Turn 1 and crashed into the barriers.

When action resumed, less than five minutes were left on the clock, meaning that the drivers had the possibility to complete only two timed laps.

Michelisz was immediately able to post a time of 1:52.740 that gave him pole position; on his last lap

Tassi was clocked at 1:53.406 and provisionally climbed to second, but Vernay improved to 1:53.364 and demoted the young Hungarian to third.

Mat’o Homola had all of his qualifying times cancelled by the Stewards following the report of the Technical Delegate that found the Opel Astra did not conform to the homologation paper.

Should the car be modified to return within conformity, Homola will be allowed to start in tomorrow’s races from the back of the grid.

Two drivers will also be demoted to the back of the grid because of engine changes: Frédéric Vervisch (who had qualified 14th) and Ferenc Ficza (23rd). Ficza should have paid the penalty in the previous event at the Salzburgring, but couldn’t because he destroyed his car in a crash during the Free Practice.

What drivers said after Qualifying

Norbert Michelisz (first): “It’s an amazing day, very nice to be on pole at my home track, in front of my fans, and driving for the first time a car of my team... I was quite emotional about it since yesterday. It’s being a wonderful experience and I want to thank all the people in the team, I am so proud of them. The car behaved well, although we still have some understeer, but if you make the fastest lap, you can’t complain. Tomorrow, in the races, I will try to help Attila and Roberto, if I can, but of course, in a sportive way and without messing around! This is my main goal, to help the team scoring points, although I don’t hide that a podium finish in front of my crowd would be great.”

Jean-Karl Vernay (second): “First of all, I would like to say how great it is to have another top-class driver such as Norbert in the series. The presence of guys like him or Rob Huff is really a plus, also for us drivers. Today’s result makes me very happy, as it comes as a nice reward after the very difficult week the team had. Last Sunday, at the Salzburgring, we finished with two wrecks instead of two cars and I too wasn’t in a very good shape… To be able to be here with two cars in perfect conditions and me relatively fit is simply great. This is a good track for the Golf and one I like a lot, so tomorrow the objective will be to score as many points as possible. I don’t think we will be in a position to beat the Honda cars, which are very fast, especially at the start, but if I can score as many points as Colciago and Comini, it will be good.”

Attila Tassi (third): “We did a few changes in the set-up of the car that worked well. I did a little mistake in Q2, which sent me off the limits, and my time was disallowed, but all in all, I am pretty satisfied. Tomorrow, I hope in a good start and a good race, it is not entirely true that you can’t overtake, there are a few places where you can do it, but I will not share my secrets… Racing at home, after the big shunt in Austria, and alongside Norbi is very special, but I do not feel more pressure than usual. It’s good to have Norbi… out of the car, that’s one serious rival less, but it is also nice to have him racing, as he can contribute a lot with his feedback and knowledge.”

Ferenc Ficza: “I really took the day as a shake-down, but the 4-5 laps I could do in Qualifying were very interesting to get a first impression about the car, which is very positive. It behaves well and has a lot of power, I think there it has a high potential.”

Davit Kajaia: “Both Dušan and I missed Q2 and there was little more we could do. This, with all these slow and medium corners, is the worst track of the season for the Giulietta…”

Stefano Comini: “With so much more weight because of the BoP and the Success Ballast, the car is simply undrivable and even dangerous. It feels like a tank, not a car!”

Craft-Bamboo Racing confident for championship turn around at the Hungaroring

Attila Tassi is prophet in his home country