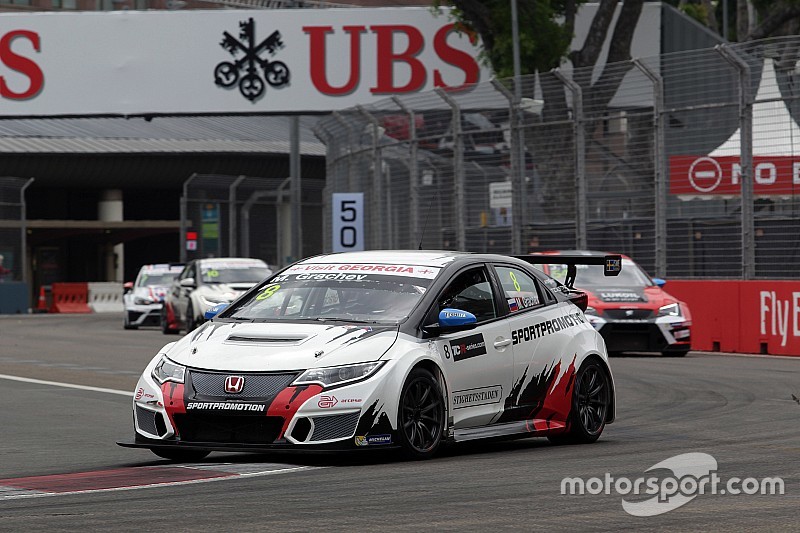 WestCoast Racing's Mikhail Grachev picked up his fourth victory of the TCR International Series season in Race 2 in Singapore.

There was not much in the way of position changes out front in the first couple of laps, with poleman Grachev holding off Borkovic and the Leopard Racing duo of Comini and Jean-Karl Vernay, who had dominated Saturday's race, making their way through the field.

But whereas Grachev and Borkovic appeared to comfortably settle into their respective spots by lap three, third-placed Sergey Afanasyev came under serious pressure from Attila Tassi.

The Hungarian attempted a late move into Turn 9, barging Afanasyev wide, only for the Russian to move back on the racing line on corner exit, spinning himself off of Tassi and hard into the wall.

Tassi would park it in the pits shortly thereafter, while Afanasyev retired on the spot, bringing out the safety car - but not before championship contender Pepe Oriola tapped Gianni Morbidelli into a spin at Turn 11 and earned a drive-through.

The restart followed as the 10-lap race passed its halfway point, with Grachev keeping Borkovic at a distance and Nash - promoted to third - holding off title rival Comini.

The Briton looked like he would have a tough job staying ahead of Comini for the rest of the race, but as Raffael Gallana spun and boxed in Neric Wei, both ending up stranded on the track, the safety car appeared again, freezing the order for good.

Morbidelli recovered to seventh, ahead of David Kajaia, Petr Fulin and Kevin Gleason, with Oriola only 14th after serving his drive-through.

With four races to go, this puts Oriola 16 points behind teammate Nash and 14 behind Comini, with Vernay entering the title hunt at 12 points adrift of the Spaniard.