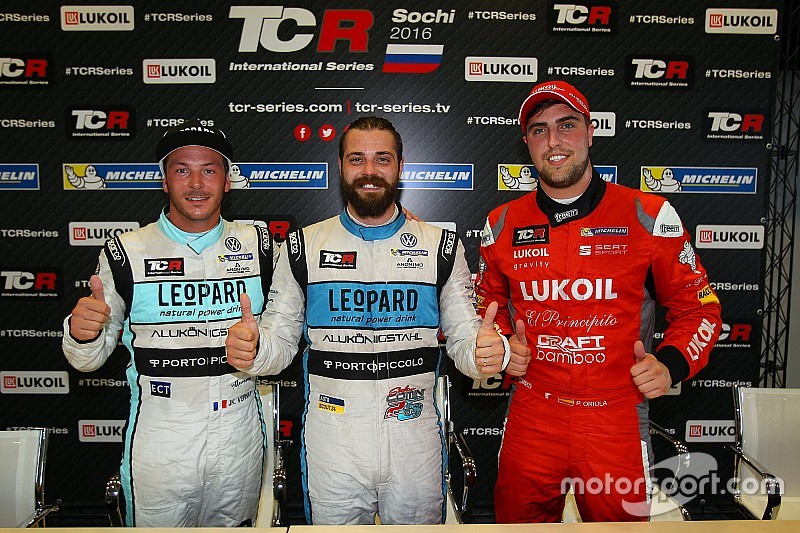 It was a very close fight, with the first eight cars within a second, despite the length of the Sochi Autodrom.

In a torrid afternoon on the shores of the Black Sea, reigning TCR champion Stefano Comini took his first pole of the season, which was also the first one for a Volkswagen Golf car and for Leopard Racing. The Luxemburger team placed his other car in third with Jean-Karl Vernay. Sandwiched in-between the two turquois Golf cars was Pepe Oriola, with the Team Craft-Bamboo Lukoil SEAT, only 141 thousandths behind the poleman and a bit frustrated after having dominated the two free practice sessions and Qualifying 1. The Spaniard saw his best time in Q2 disallowed, for exceeding track limits, although this did not affect the final ranking.

It was a very close fight, with the first eight cars within a second, despite the length of the Sochi Autodrom. Gianni Morbidelli was fourth at the wheel of the WestCoast Honda Civic, ahead of the Mulsanne Racing Alfa Romeo Giulietta of Petr Fulín. The Czech rounded in Q2 a day that saw him always in the top positions and confirmed the progress made by the Italian car.

On their home track, Russian drivers lived a somehow difficult day, with Mikhail Grachev qualifying seventh and Sergey Afanasiev 11th. The two other locals present in the Russian event, Ildar Rakhmatullin (WestCoast Honda Civic) and Vladimir Sheshenin (Liqui Moly Volkswagen Golf) did not pass the Q1 cut, together with Michela Cerruti who complained about severe understeer.

The first row on the reverse grid for Race 2 will be filled by B3 Racing Team Hungary’s Attila Tassi (on pole) and Mat’o Homola.

The first race will start tomorrow at 12:35 local time, over a distance of 11 laps.

Pepe Oriola continued in topping the sessions as he was the fastest in Q1 with a lap of 2:21.734. Just like in the second Practice, Stefano Comini was his closest competitor, only one tenth behind (2:21.876), while Jean-Karl Vernay ranked in third (2:22.206).

The two Honda Civic cars of Gianni Morbidelli and Mikhail Grachev qualified in seventh and eighth, behind Dušan Borković and James Nash.

Stefano Comini claimed pole position with the time of 2:21.130 on his first lap out of the pits. Nobody was able to improve and only Pepe Oriola got close to it; the Spaniard’s best lap (2:21.160) was disallowed by the Stewards because he trespassed the track limits, but his second best (2:21.271) gave him a front row position on the grid for Race 1.

Drivers’ quotes after the Qualifying session

Stefano Comini (pole position): “It is very nice to take the first pole of the year for both Volkswagen and Leopard Racing. This is probably the first time this year that I am really happy with our qualifying performance and that I can say that we could bring the car to its limit. For once, we did not struggle with oversteer and I could give everything and have three flat out laps in Q2. I could benefit a little from some slipstreaming by Gianni [Morbidelli] and that was helpful as our cars are not as fast as the others on the straight. It will be more difficult to keep the advantage tomorrow, especially at the start, and we can predict some action at first corner…”

Pepe Oriola (second fastest): “I don’t feel particularly upset to have not taken the pole after being the fastest in free practices and Q1. It just happened that in Q2, my first fast lap was disallowed because I ran too wide, although that lap would not mean the pole. Then, I was a little bit wide in my second attempt as well, and by then my tyres lost performance. Still, the first row is a good position to start from and we’ll see what happens. It’s going to be a long and tough race and I’ll approach it thinking about the championship and trying to avoid doing any crazy things.”

Jean-Karl Vernay (third fastest): “It was an excellent result for the team and a good start of the weekend for me, while discovering the track. I must say I really like it. It’s a technical and interesting track that requires a good flowing and a good rhythm to be competitive. My only concern is about the start and the first corner. I think that with a lot of faster cars around Stefano and myself, it is going to be a crowded place…”

Gianni Morbidelli (fourth fastest): “I cannot be entirely satisfied today, I really believe we simply limited the damage… The truth is that we are less competitive than expected here and that we have probably reached the ceiling of our potential on this racetrack…”

Petr Fulín (fifth fastest): “I feel as happy as if I would have done the pole… It’s really a good result for us and for the entire team, which has worked very well, especially today when they could solve the turbo problem occurred in free practice 1 and give me a car capable of taking P5 in Q2. Considering that there was no time to work on evolving the car between Oschersleben and here, it means that we are becoming more and more competitive. This afternoon, the car was much better than this morning and I could perform three laps at the same pace. I used a bit Morbidelli’s slipstream and that probably represented a gain of around 4 tenths.”