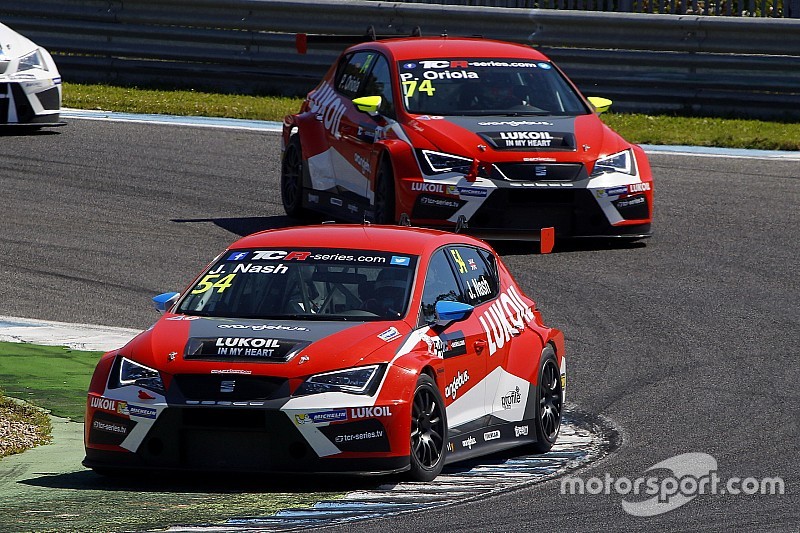 James Nash trails the top spot by only one point, while teammates Pepe Oriola and Sergey Afanasyev are close behind in third and fourth.

Team Craft-Bamboo Lukoil is aiming to take back the drivers’ championship lead this weekend at the famous Spa-Francorchamps circuit in South-East Belgium. James Nash trails the top spot by only one point, while teammates Pepe Oriola and Sergey Afanasyev are close behind in third and fourth. All three drivers have a chance to climb to the top of the championship standings in Belgium and it will be a closely contested fight to see who comes out on top. Now with minimal ballast, the team will be focused on a good qualifying performance to put them at the front of the grid and ahead of their championship rivals.

After scoring his first TCR Series career win and finishing the weekend third in the points at Estoril, Nash has been given 10kg of success ballast to contend with in Spa. Given the brilliant performance in Portugal with twice the weight penalty, Nash will be looking to take advantage of a lighter SEAT Leon and a fully laden Gianni Morbidelli to score another top result and claim his place at the top of the table.

After a tough last round, Oriola is determined to bounce back and continue his fight for the championship lead once more. The Spaniard is confident that being free from ballast will allow him to mount a much more successful challenge this weekend and he has high hopes of taking the top step and returning to the form that we saw in the first round of the season.

Afanasyev is well within striking distance of the lead and he has been a top level competitor so far this season with his consistent pace and great overtaking manoeuvres. Combined with his improved starting procedure and qualifying performance, the Russian will be aggressively fighting for the podium and is one to look out for this Friday and Saturday.

“Spa is a challenging track and as always track time will be limited as the lap is so long. It's exciting to see new entries for this event and this adds another level of unknown to this weekend. I do, however, remain focused on scoring points for the teams’ and drivers’ championship.”

“I want to really focus on scoring some points as well as trying to enjoy this track at the same time. I really love the Spa Francorchamps Circuit and without weight I think we can get good results this weekend.”

“It is wonderful to race on such a famous circuit and with the top drivers so close in the championship it is very important for me to score some good points this weekend. At this early stage in the competition I want to be consistent with my results and I have been trying hard to develop my starts, so let’s see what happens this weekend.”

“This is a more familiar circuit for us and with only James Nash running with 10kg of ballast, we will be aiming for some good results to get us back in the lead of the drivers’ championship. As always, consistency will be key and we will be using our knowledge of the track to our advantage”

Team Craft-Bamboo score a win in challenging weekend at Estoril