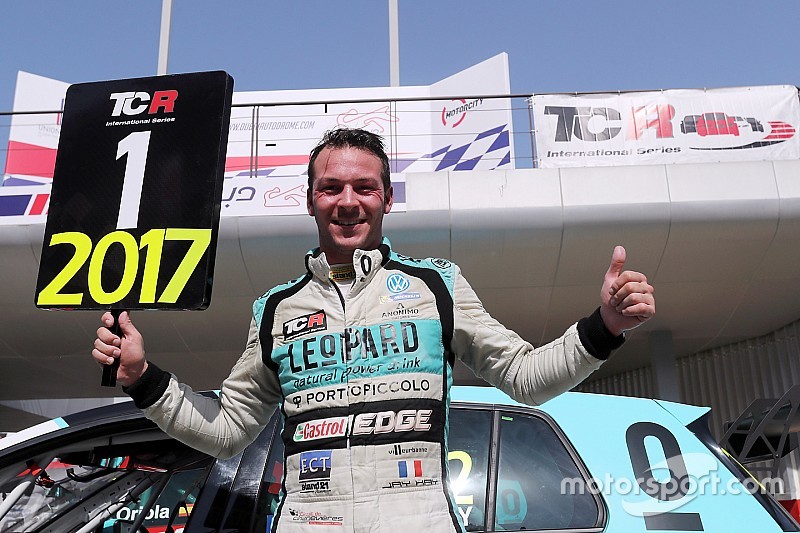 Jean-Karl Vernay claimed a maiden TCR International title at Dubai Autodrome with a third-place finish in the opening race of the weekend.

The Frenchman made a poor start from the front row and was swiftly dispatched by eventual race winner Pepe Oriola, before slotting in behind the sister Volkswagen Golf GTi of teammate and pole-sitter Gordon Shedden.

His main championship rival Attila Tassi needed to outscore Vernay to keep the fight alive to the final round, from which he will start on pole as the top 10 from qualifying are reversed.

Though Tassi made a strong start, rising to fifth on the second lap, Vernay ultimately proved too fast for him to overturn, even with the assistance of a safety car after Daniel Lloyd crashed heavily following contact with another outsider title contender, Roberto Colciago.

James Nash's SEAT Leon began to slow in the closing laps, holding up Vernay and allowing Tassi an opportunity to challenge for fourth.

However, Vernay capitalised on a mistake from Nash into the high-speed right hander at Turn 6 to slide up the inside of the following corner and cement his advantage in the standings with the final spot on the rostrum.

The 30-year-old has only won one TCR International Series race this year - at Spa-Francorchamps - but scored consistently enough to build up an unassailable lead of 30 points ahead of the final race.

The opening race at Dubai marked an impressive debut in the series from three-time British Touring Car champion Shedden, who matched Oriola at the front for the duration but kept one eye on his teammate's fortunes behind.

Gabriele Tarquini was forced to start from the rear of the field following an engine change overnight.

The veteran put in a blistering performance to steer his Hyundai i30 from 21st to third before a front-left puncture, caused by the weight of the car under success ballast and the number of fast right-hand corners on the National layout of the Dubai Autodrome, forced him to retire in the closing stages while looking likely to challenge for victory.