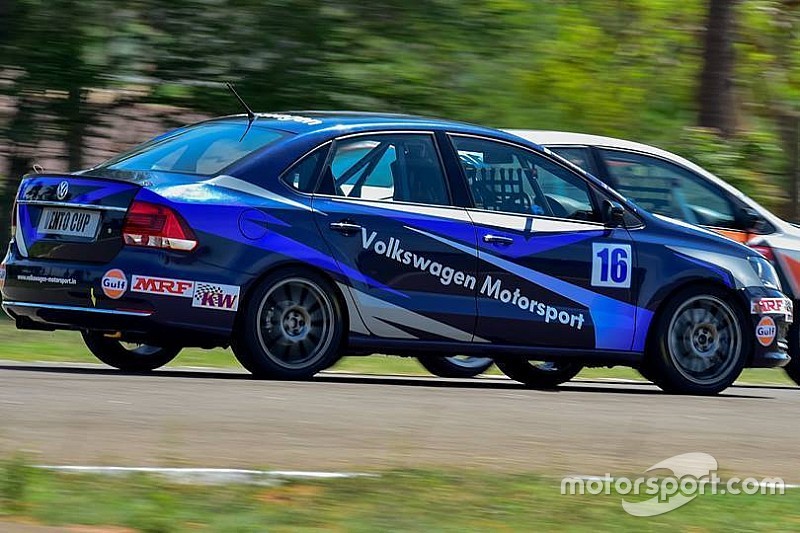 2015 runner-up Karminder Singh came through the field to claim victory in a wet second Volkswagen Vento Cup race at Coimbatore.

Singh took advantage of the damp conditions, moving up to third from sixth by the second lap.

The Delhi-based driver then disposed off reverse grid polesitter Venkata Teja on the following lap, before building a comfortable buffer to the rest of the field.

Race 1 winner Ishaan Dodhiwala, who started alongside Singh on the fourth row of the grid, finished second, having likewise made leapways in the opening laps of the race.

Aditya Pawar took the final spot on the podium, finishing 7.61s behind the race winner as Race 1's podium finisher Keith Desouza was fourth place to cap off a fine rookie weekend in the Vento Cup.

Amit Mete and Jeet Jhabakh both lost positions in the reverse grid race two, finishing fifth and sixth at the chequered flag.

Pradeep Rao, Niranjan Todkari and Hatim Shabbir were classified in seventh, eighth and ninth places respectively, ahead of the aforementioned Teja, who continued to dip down  the order after his initial slip from pole.

The race was delayed when rain hit the track just as drivers went out on the grid, forcing them to return to the pitlane for a change of tyres.