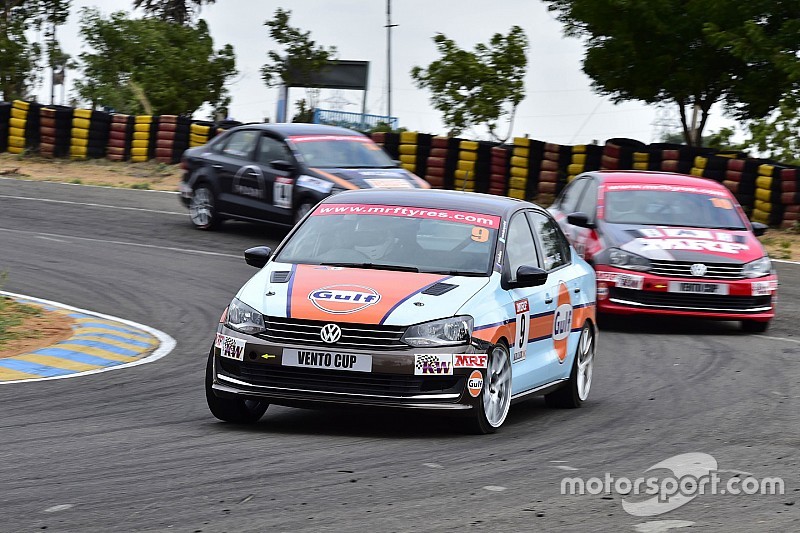 Ishaan Dodhiwala foresees a four-way fight for the Volkswagen Vento Cup title this year and expects his rivals to pick up the pace as the season goes on.

Dodhiwala, along with Karminder Singh, were absolutely dominant in the first round, leading to suggestions that these two experienced drivers will be the only ones to fight for the title.

But the Hyderabad-based driver disagrees, saying there are at least a couple more drivers who are capable enough to challenge for the crown.

“Not straight between Karminder [Singh] and me because there are other good drivers as well,’’ Dodhiwala told Motorsport.com.

“Keith [Desouza] has been driving the IJTC for a few years and has adapted well to the [Vento Cup] car in no time. So is Aditya Pawar, he was racing earlier.”

“So it’s just a matter of one race and one round they can be ahead and the momentum changes. So I think it will be a good fight between 3-4 drivers and it should be an interesting season,’’ he added.

Having finished third in 2015 standings, Dodhiwala emerged as one of the star drivers in the first round, winning the first race of the weekend.

He followed that result with a second place finish in Race 2, climbing up from eighth on the grid on a damp track.

The Indian now is focused on continuing his strong run in the next round of the championship in Chennai. “Last year, my Round 1 didn’t go well,’’ he said.

“I had contact and I didn’t finish on the podium managing only fourth and seventh. But slowly I started picking up momentum and finished the season on a high.”

“I’m glad the first race worked out how it did. Looking forward to taking it to the next few races and the next round,’’ he added.

Dodhiwala says his first priority is to stick to touring cars, although lack of options means that he will be forced to try out single-seaters within the country.

"I will obviously drive single-seaters as well because we don’t have much options in touring cars," he said.

"So in terms of other racing opportunities, single-seaters offer a lot more championships so I will explore that as well.

"I will like to race everything I can. It’s just a matter of finding a budget and scheduling and stuff," the Indian added.

Dodhiwala has Volkswagen Polo GTI China in his sights, which comes as a reward for winning the Vento Cup where Karthik Tharani, Prashanth Tharani and Anindith Reddy have competed in.

“It’s too early in the season to say anything about that but hopefully if I carry this momentum through the season and end up winning it, I would love to drive that car there,’’ he said.