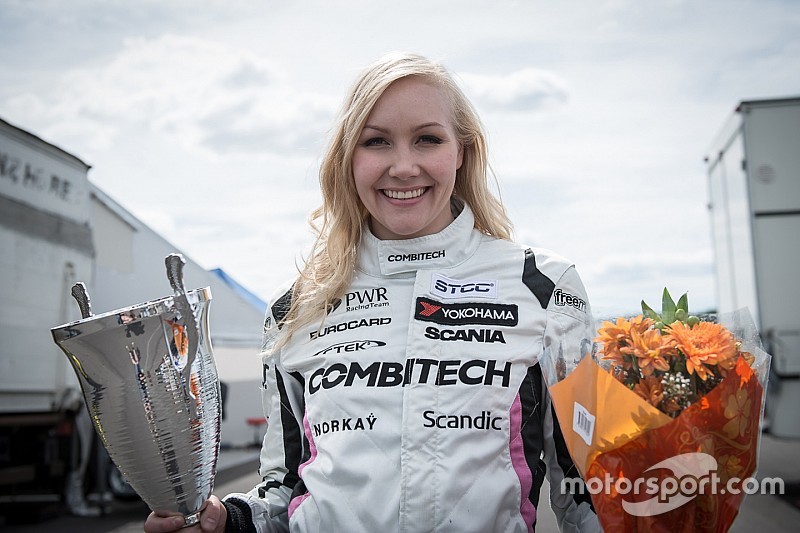 Emma Kimilainen's journey from Audi factory driver to touring car ace - via motherhood - is a unique one in motorsport. Valentin Khorounzhiy takes up the story.

In the cutthroat, ultra-competitive world of motorsport, the word “hiatus” often takes on the same meaning as “retirement”.

If a driver's financial backing is dependent on outside sources, missing a season can easily end their career on the spot as they drop off from the radar of sponsors, teams and championships.

But that was not the case for Emma Kimilainen – even though she missed not one but four seasons, ended up completely out of practice and gave birth to a daughter during her time away from the sport.

These days, the Finnish lady is back behind the wheel again and making a name for herself once more in the Scandinavian Touring Car Championship.

But her earlier junior career, in which she was backed by Audi, could have had a very different outcome if the German manufacturer wasn't hit by the economic realities of the previous decade's final years.

In 2007, 18-year-old Kimilainen – an established frontrunner in the Finnish Formula Ford series and a race winner in the Swedish Radical championship – got a big break when Audi took interest in her successes, eventually inviting her to test its DTM machinery at the end of the year.

“[Audi] kind of had this spot for a woman driver in their line-up at the time,” Kimilainen recalled. “So they wanted to test all the quick women in Europe... and from all over the world.

“In December of 2007, they invited me to Almeria to test and it went really well. And they really liked me a lot - but the problem was that I was only 18 years old.

“They actually said that it's maybe a bit too early to put me into DTM in a two-year-old car. It would not have been the best choice at that moment.”

The seat eventually went to Katherine Legge – and while Kimilainen admits she was initially “very disappointed” to miss out, she has since agreed it was the correct call for her career.

“They did give me another opportunity,” she added. “Starting with 2008, I was an Audi factory driver.”

Leading up to hiatus

Kimilainen spent 2008 as a Volkswagen-Audi junior, racing in the inaugural season of the VW-powered ADAC Formel Masters series. For most of the campaign, she was Van Amersfoort Racing's sole entrant, albeit three rounds saw her partner up with one Kevin Magnussen.

Of the 20 full-time entrants, Kimilainen had finished 10th, picking up a sole podium finish – and despite a seemingly respectable campaign, the Finn reckoned it had been the lowest point of her career.

“If someone asks me if I had any low points in my career, it's that whole year. That year I would just like to erase. But I did learn a lot.”

While funding was already becoming an issue in 2009, Kimilainen did manage to carry on, moving to the British-based Formula Palmer Audi championship, and was re-invigorated by a strong outing in her first test.

“A huge weight came off my shoulders,” she noted, breathing an exaggerated sigh of relief. “It was, like, 'I'm not shit at all, I can do this still'.”

After a 21-race campaign, Kimilainen ended up fifth in the standings. But the October weekend at Snetterton, where she picked up three four-place finishes, would stand as her last appearance in a major racing competition until 2014.

“It was a very difficult choice to make,” Kimilainen recalled. “I just didn't have enough financing - to actually drive. And I was a little bit stupid at that point cause I was only thinking about formula racing. I wanted to be in F1.

“I was making the choice that, if I cannot go through, one hundred percent, with the F1 target, that I would not race at all. I was tired of always taking side roads towards my goal.”

The Finn admitted that, when she had stopped racing, she had no intention of permanently parting ways with the sport – but also noted that being away from the track was “a relief”, at first.

“I started [racing] when I was three years old, so it felt kind of good to now have a normal life. I was really happy - I bought an apartment in Finland, I thought 'okay, I can settle down in Finland, I can get a real job, I can actually study something.'

“I got a BBA degree in a year and a half, and I was working full-time as a sales manager in a big security company at the same time – and I had, like, really big customers and budgets, it was intense. And I had a wedding and I had my first baby.

"Still, I felt that something was missing. And I kept taking on new projects, trying to fill the hole that racing left in my life."

And back at it

“When my daughter was six months old or so, I got a mail from the PWR team that I race for right now. It said: 'we've kept an eye on you for a very long time – now we are ready and we want to ask if you would like to come to drive for us in STCC'."

It wasn't the first offer Kimilainen received over her four-year hiatus – but it was the first offer that proved viable, giving the Finn her debut in tin-top racing, behind the wheel of a Saab 9-3.

“It wasn't easy to get back into it. I only drove the car for three short days before the first race weekend – and I had not raced anything for four years, apart from a little bit of indoor karting.

“It went really well from the first moment in qualifying, but in race situations, I was really nervous about making mistakes – to the point where I could throw up, really. But I got out of that mindset - the mindset of being the punching bag of the series as its first female driver in 15 years.”

11th in her rookie season, Kimilainen moved up to seventh in year two – and while she has already stood on the podium on four occasions, she is still chasing a maiden win.

Despite that, the Finn is extremely proud of the progress that's already been made.

“We are a new team so we actually have done a lot of work to get to the point where we are at right now without any testing.

“We've figured out quite a lot of things in the autumn last year - and we are quite sure that we can actually really be on top in 2016.”

While her immediate future is in STCC, the Finnish racer admits she is keen on getting a shot in championships outside of Scandinavia.

“I would love to actually drive the Formula E, I am really in love with that whole series, I think it's so cool. DTM is also a future goal. Or the WTCC.

“But, the thing is, I'm really happy to just drive wherever I'm driving. I don't have an exact place I want to be in five years' time. I just want to race, no matter where, and I'll be really happy.”