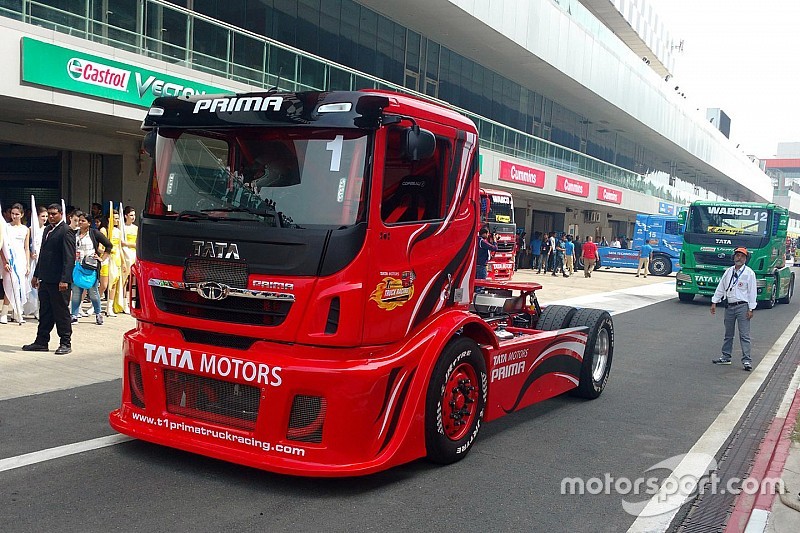 Tata Motors is evaluating the introduction of a new 1,040 bhp Prima race-spec truck in 2018, after showcasing it at the Buddh International Circuit last weekend.

Since the T1 Prima Racing Championship made its debut in 2014, Tata has been constantly updating the Prima truck. In its current guise, the machinery produces around 400 bhp and weighs about seven tonnes.

For 2018, the Indian manufacturer is expected to make a massive leap with their new 1,040 bhp truck, whose engine has been built in conjunction with America’s Cummins.

During some demonstrations laps around the first loop of Buddh Circuit, the new Prima truck clocked a time of 1m35s, a 12 second improvement over the now-previous generation truck.

With more testing scheduled, Tata is considering the upgradation to the new truck for next year’s championship.

Should the new prototype truck be introduced, it will put the T1 Prima Truck Racing Championship on level with some of the international series held in Europe and the UK.

“We have to evaluate; they are many pros and cons [of the new 1,000 bhp truck]”, Ravindra Pisharody, executive director of Tata Motors’ commercial arm told reporters including Motorsport.com.

“It is possible, definitely possible. That’s we haven’t made 16 [new 1000 bhp] trucks in one year. We’ve made two trucks that we will be working with even after today.”

While Tata Motors has to consider the financial and technical feasibility of the new truck, it will also have to train the Indian drivers to cope up with the demands of such a powerful vehicle.

Currently, due to the comparatively slow speed of the current-generation Prima trucks, the championship only utilises the first loop of the track - leaving out some of the more twisty corners that are found in Sectors 2 and 3.

However, with the expected jump in lap times, it is highly likely that Tata will use the entire layout of the track.

Tata has spoken often about expanding the Prima race calendar, which is currently limited to one annual round at Greater Noida’s Buddh Circuit.

Lack of tracks in India with enough safety features and spectator points have been cited as key issues behind the hesitance to take the championship to new venues, with Grade 1-level BIC being the only current circuit that meets the demand of truck racing.

However, with Chennai’s Madras Motor Race Track recently resurfaced and equipped with more barriers, there’s a renewed interest in taking the race to India’s oldest track.

While Tata has been utilizing MMRT for testing, there is no final word on whether a race could be held at the venue in near future.

“We will evaluate. Every year we look at it. We will decide. Cost benefit. Lots of things need to be taken into account,” Pisharody said.