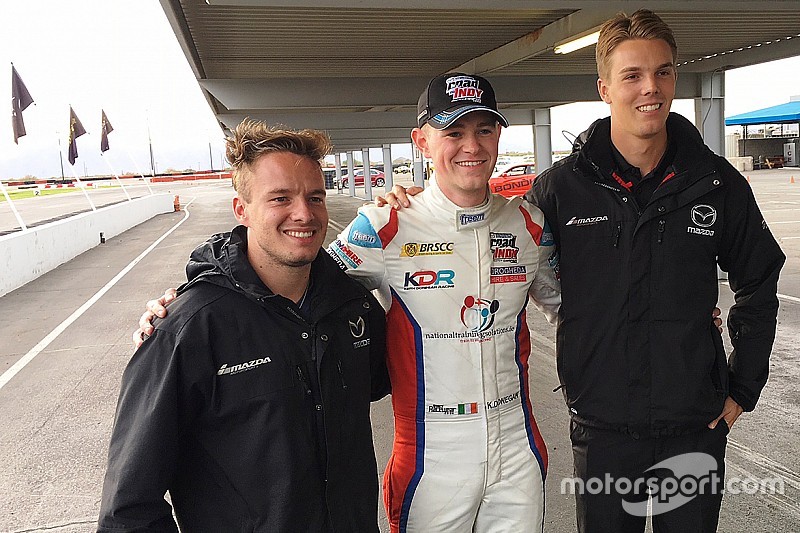 A total of 17 young drivers representing nine different nations and drawn from a feeder series from around the world were assessed in Bondurant Racing School Formula Mazda cars. This group was whittled down to five – Donegan, Jake Craig, Olin Galli, Aaron Jeansonne and Liam Lawson – to participate in a final qualifying session and 30-minute race simulation.

“It really hasn’t hit me yet to be honest,” said Donegan, who earned a check for $200,000 to assist his graduation into USF2000 in 2018. “The weekend was really good and I really enjoyed it. I have to say a huge thanks to Mazda and Cooper Tires and everyone at the Mazda Road to Indy. I enjoyed every moment.

“Throughout the weekend we were consistent and I kept the small things in check. I didn’t make any stupid mistakes and kept my head cool and that really paid off in the end.

“It is an unbelievable opportunity to be given and for Mazda to provide that for any young driver, it just gives them that bit of motivation that you need because the States is where you need to go to become a professional these days. It is such a boost to my career.”

Donegan made the move into cars in the 2013 Ginetta Junior Championship in the UK, finishing eighth in the points chase and then placing second in 2014 before spending two years away from the sport while he concentrated on academic studies.

He turned heads this year during his initial campaign in open-wheel cars and earned his position at the Shootout as an At-Large Nomination after finishing a close second at the Formula Ford Festival at Brands Hatch to cap an impressive debut season in the BRSCC British Formula Ford 1600 Championship.

Kyle Kimball, manager of operations for Mazda Motorsports said: “It was incredibly difficult for the six judges to come to a decision. But, at the end of the day, we feel really confident with our pick of Keith Donegan. He is going to be a wonderful representative for the Mazda brand, for the Cooper brand and the entirety of the Mazda Road to Indy in USF2000 next year.”

Kohl to return to USF2000 with Pabst