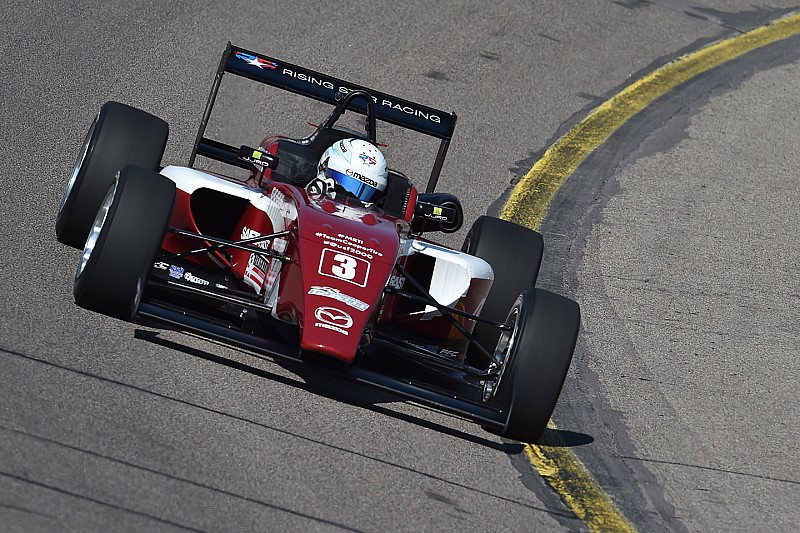 Oliver Askew converted his pole position into a flawless drive to victory for Cape Motorsports to score his sixth victory of the season, but title rival Rinus VeeKay reduced the damage in the points chase by taking second.

Askew made a perfect start to hold off Pabst Racing’s Calvin Ming, who fell over a second behind within the first couple of laps and swiftly had teammate Rinus VeeKay on his gearbox.

Within 10 laps, fourth-placed Robert Megennis was two seconds behind, and holding off Pelfrey teammate Ayla Agren and the slow starting ArmsUp Motorsports car of Alexandre Baron who passed Agren on Lap 12.

Baron then moved in on Megennis.

On Lap 19, the third Pabst car of Lucas Kohl and third Pelfrey car of Kaylen Frederick demoted Agren to eighth, and Baron started severely pressing Megennis for fourth place. Before the halfway point in the 60-lap race, he was through and away, despite Megennis’ best efforts to retaliate.

Askew’s lead was out to four seconds at this point, and Ming was having to work increasingly hard to keep teammate VeeKay behind him. The closest battles on track were Kohl’s and Frederick’s attempts to pass Megennis and the second ArmsUp car of Devin Wojcik trying stalking Agren.

And yet it was the Pabst Racing pair in the top three who swapped places first, VeeKay getting past Ming for second on Lap 46, but finding himself 5.2sec adrift of points leader Askew. Three laps later, Frederick was past Kohl and into sixth and over the closing laps, he moved onto the tale of Megennis but couldn’t quite get the job done before the checkered flag fell.

And so Askew paid out the line and won by 3.8sec ahead of VeeKay, Ming who just held on ahead of Baron, Megennis, Frederick (iust 0.0969sec behind), Kohl, Agren, Wojcik and DEForce Racing’s Moises de la Vara who was 10th but one lap down.