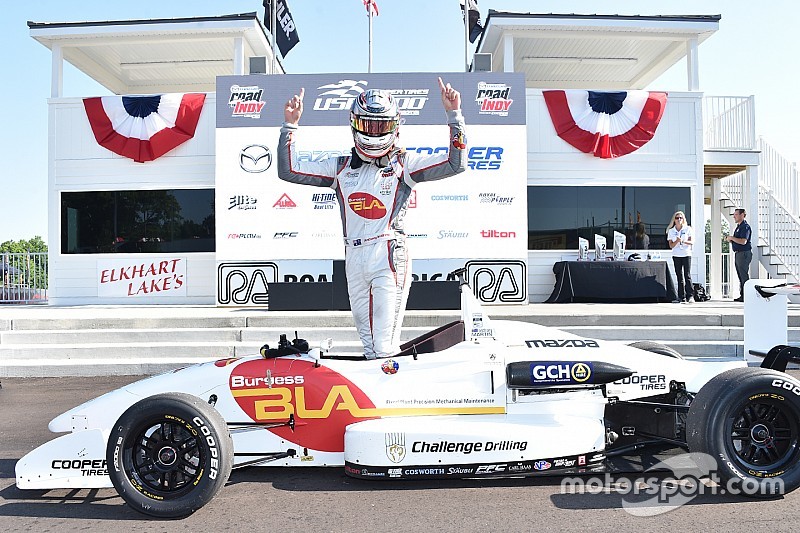 From the start Cape Motorsports’ Martin held off fellow front-row starter Victor Franzoni of ArmsUp Motorsports while Thompson ducked around the Brazilian to grab second and threaten teammate Martin. Behind, these three, Lloyd ran fourth ahead of Team Pelfrey’s Jordan Cane and the Jay Motorsports car of Luke Gabin.

However, when two of Pabst’s stars Garth Rickards and Yufeng Luo fell off the track further around that opening lap, a full-course yellow re-bunched the field. On the Lap 4 restart, Lloyd tried to separate Franzoni from third, failed to get it, but didn’t need to wait long before Franzoni and Thompson tripped over each other, dropping to sixth and fourth respectively.

That allowed Lloyd a clear run at Martin, and he closed the gap to under half a second with three successive fastest laps, but Martin responded on lap 8, just as Lloyd made a slight error and the gap went back up to one second.

Another full-course yellow – for Cane going off at Turn 14 on lap 10 – gave Lloyd his final chance in a one-lap shootout, but he was too occupied holding off his pursuers to take advantage, and he passed the checkers 0.9sec behind the winner.

Gabin had nothing for the two leaders, and only just held off the recovering Franzoni – by less than 0.1sec – to claim third at the finish line, with Thompson a disappointed fifth. He now sees his points lead over Thompson reduced from 26 points to 11.

Ayla Aygren started the last lap in sixth for John Cummiskey Racing, but lost out to Cape’s Nikita Lastochkin and Pelfrey’s Robert Megennis.