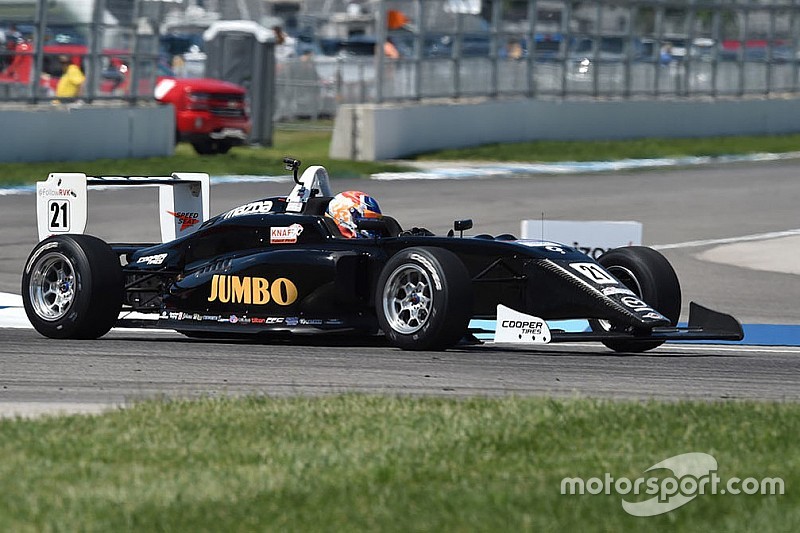 Rinus VeeKay led a Pabst Racing 1-3-4 at Road America, as David Malukas converted a surprise pole into second place, and the season’s dominant driver Oliver Askew fell to the rear with a suspected damaged wheel.

Cape Motorsports' Oliver Askew easily beat surprise polesitter David Malukas of BN Racing at the drop of the green flag, and Rinus VeeKay of Pabst Racing also passed Malukas, yet Malukas got back in front in time to lead the opening lap.

On the second lap, Askew made an error that allowed VeeKay and Kohl ahead, and in VeeKay kept pushing to grab the lead from Malukas, as Askew repassed Kohl for third.

Malukas regained the lead down into Turn 3, allowing Askew to start pressuring VeeKay for second, a position he gained at Canada Corner, and Kohl also got around his teammate for third.

On lap 4, the frontrunning order changed again, as Askew got demoted again by the Pabst Racing pair with VeeKay now back ahead of Kohl.

This frantic battling at the front took the focus off the fact that Thompson moved up from seventh to fifth with Devin Wojcik's ArmsUp Motorsports machine in sixth, but on the fifth lap it was Megennis's Pelfrey car in sixth, Calvin Ming in seventh, and Moises de la Vara at the tail of the field after running off road at the final corner.

VeeKay was back in the front for lap 5, ahead of Malukas, Kohl and Askew, but Askew grabbed third on lap 6 and closed up on Malukas who he passed on lap 7.

The race settled down somewhat on lap 8, as VeeKay seemed to have all the answers for Askew's questions and had a lead of one second over the season dominator, who in turn had a second on Malukas. The significant move that lap was Ming drafting past Megennis to grab sixth.

The lead battle got truly broken up when Askew dived into the pits at the end of the ninth lap with a suspected damaged wheel, leaving Malukas running 3.8s behind leader VeeKay, with Kohl third ahead of Thompson, Ming and Kaylen Frederick who took over role of lead Team Pelfrey driver on lap 11.

The tightest battle in the closing stages was between Ming and Thompson, who exchanged places on lap 12, but Ming then stretched away to clinch fourth and complete a 1-3-4 for Pabst. Interloper Malukas could be satisfied with runner-up finish, 6s adrift of the winner.

Askew had to be satisfied with a 17th-place finish and fastest lap.