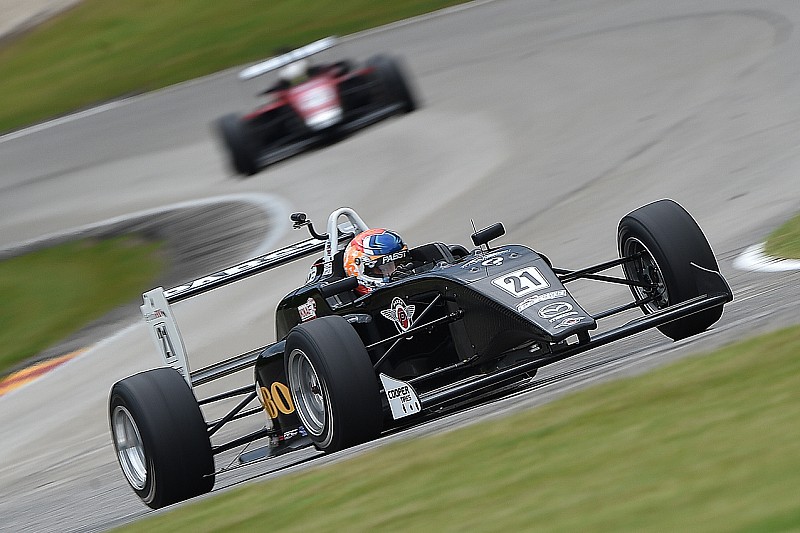 Rinus VeeKay scored his second victory of the weekend after leading 11 of the 12 laps and he headed a Pabst Racing 1-2 finish after David Malukas spun away a runner-up finish on the final turn of the final lap.

Pabst Racing’s polesitter Rinus VeeKay grabbed the lead at the start but David Malukas of BN Racing wasted no time in passing both Cape Motorsports’ Oliver Askew and VeeKay to grab the lead by the end of Lap 1.

When the full-course caution flew on Lap 2 – for a collision between ninth and 10th place starters Jacob Loomis and Darren Keane – VeeKay was back in front ahead of Malukas, Askew, Exclusive Autosport’s Parker Thompson, Team Pelfrey pair Kaylen Frederick and Robvert Megennis, Calvin Ming in a second Pabst car, and Colin Kaminsky of John Cummiskey Racing – up from 12th on the grid to eighth, partly thanks to the Loomis/Keane shunt.

The restart at the start of Lap 5 meant there were just 16mins left on the clock, and VeeKay held firm but Askew ran wide as he tried to draft the pair of them, and allowed Frederick to close up. However, Askew was able to hang on to the leaders because they lost so much time running side by side. A wild attempt by Frederick to take third from Askew at Turn 5 saw him lose a spot to Ming, as Thompson fell to seventh behind Megennis, but got back ahead the following lap.

On Lap 6, VeeKay’s lead was out to 0.3sec, as Askew fell a second behind them, but Askew who already has five wins to his name this year, started closing back in on Malukas, the trio now a second ahead of Ming and Frederick. Megennis had now fallen down the field with a missing front wing and would eventually have to pit.

Finally on Lap 9, with just 4min30 left on the clock, VeeKay had edged his lead to more than a second, and without an error, he wasn’t going to be caught. Malukas, though, was still working hard to hold off Askew who in turn was starting to be threatened by Ming. At the start of the final lap, Ming got the job done and moved into third, and on the very last corner it became second as Malukas spun off, handing Pabst Racing a 1-2 finish and allowing Askew back on the podium.

Frederick and Thompson completed the top five, while Lucas Kohl made it three Pabst cars in the top six.