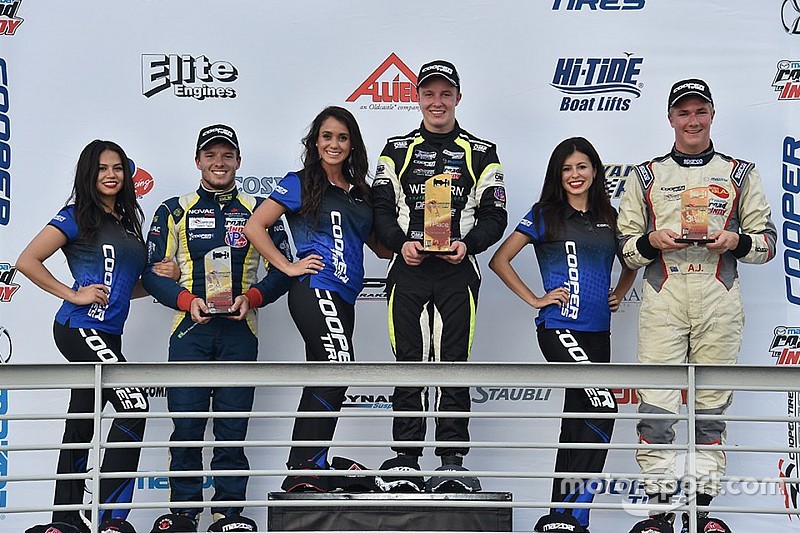 Parker Thompson of Cape Motorsports with Wayne Taylor Racing made it look easy in the first of two USF2000 races at Barber Motorsports Park.

The Canadian led the 30-minute race from green light to checkered flag, eventually winning by 4.3 seconds over Victor Franzoni.

The Brazilian driver made the best of a great start, where he went from fourth to second, and while he could not hang onto the winner, the ArmsUp Motorsport driver was a comfortable 5 seconds clear of an engrossing battle for third.

In the end, it was Thompson’s Cape teammate Anthony Martin who just held onto the place by half a second ahead of Australian compatriot, JAY Motorsports’ Luke Gabin who passed Jordan Lloyd for fourth on lap 2.

Gabin appeared to be the quicker than Martin in the closing stages, and went down his inside at Turn 5 on the penultimate lap. But by taking the shallower outside line for T5 Martin was positioned on the right side of the track in the drag race down the straight. That gave him the inside line for the next right-left-right chicane and forced Gabin to fall in line behind.

Gabin looked set to have one more go on the last lap, but drifted slightly wide at Turn 4 and thus wasn’t close enough for a good stab at Turn 5.

Lloyd of Pabst Racing was left some seven seconds behind this battle but held off Jordan Cane of Team Pelfrey to grab sixth.

John Cummiskey Racing’s Ayla Agren dropped from sixth to seventh at the start, and on the second lap also lost out to Cape Motorsports’ Nikita Lastochkin but went on to finish eighth ahead of Garth Rickards (Pabst) and Chastain Motorsports’ Austin McClusker.

Thompson doubles up at Barber