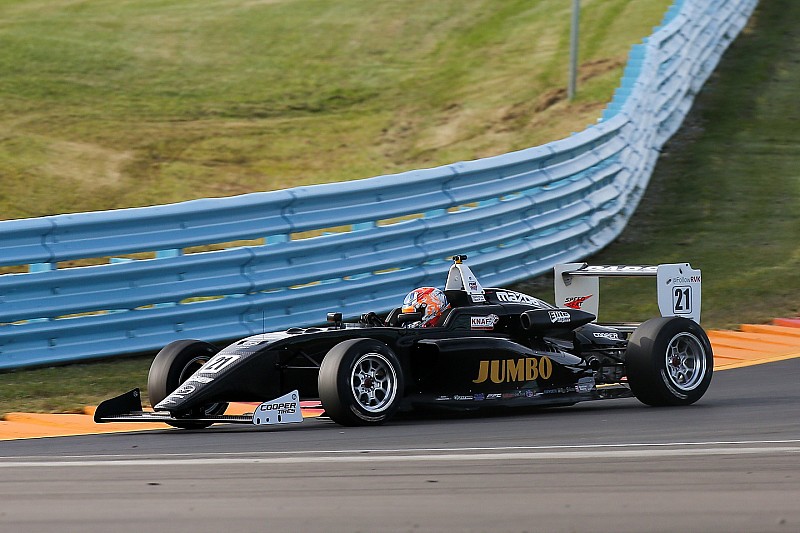 Cape Motorsports’ Oliver Askew did more than he needed to clinch the 2017 USF2000 Championship in his rookie season, finishing second to the dominant Rinus VeeKay at Watkins Glen, who scored his third victory with Pabst Racing.

At the drop of the green, VeeKay passed Askew around the outside of Turn 1 and hugged the inside line up to the Bus Stop chicane to establish his lead, and passed the start/finish line 0.77sec in front.

This pair were chased by Pabst Racing’s Calvin Ming who’d gotten past both DE Force cars. Andres Gutierrez ran fourth, with Kaylen Frederick of Team Pelfrey, Alex Baron of ArmsUp Motorsports and Lucas Kohl of Pabst getting past Kory Enders.

Next time by, Frederick was up to fourth ahead of Gutierrez, Kohl, Enders and Baron.

VeeKay’s lead was up to 1.8sec on Lap 3, but Askew didn’t need the victory; he just needed a top-four finish, and although Ming was only 0.7sec behind, Frederick was a further 1.6sec adrift and working hard to hold off Gutierrez and Kohl. On Lap 9, Kohl was demoted by Enders; the following lap, David Malukas of BN Racing was through too, and then Newman Wachs Racing’s Darren Keane zapped Kohl around the outside at the Bus Stop.

After a dozen laps with seven minutes to go, VeeKay had pulled his lead out to five seconds, and Ming was just half a second behind Askew.

Malukas passed Enders for sixth on Lap 14 – remarkable progress considering he’d started 14th – but all eyes were on the front as VeeKay kept pulling away from Askew, taking an eight-second lead into the final lap and score his third win of the season. It was his 12th podium finish in the season's 14 races.

Meanwhile Askew just stayed out of reach of Ming to win the USF2000 championship with Cape Motorsports by seven points, after a stunning season in which he grabbed seven wins.

Parker Thompson of Exclusive Autosport was only 16th in this race, but clinched third place in the points table, as Frederick claimed fourth place in both race and championship.