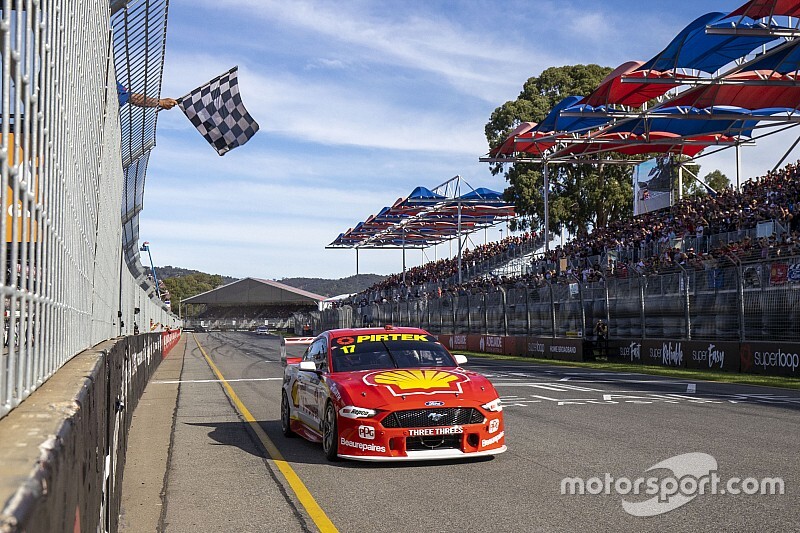 Scott McLaughlin took full advantage of a costly error by Triple Eight to secure his first win of the 2020 Supercars season.

Some swift work in the pits from the factory Holden squad in the first round of stops looked to have given van Gisbergen the upper hand in a tight battle with rival McLaughlin.

However an uncharacteristic error in the second round of compulsory stops saw van Gisbergen fall short of the required fuel drop, van Gisbergen forced into a third tour of the lane as McLaughlin charged to victory.

Paired with his second place yesterday, the reigning champion leads the points coming out of the first round.

Van Gisbergen, meanwhile, didn't even make the finish after a disappointing afternoon ended with a suspension failure three laps from home.

That paved the way for a first podium in Walkinshaw Andretti United colours for Chaz Mostert, while Cam Waters rounded out the top three.

McLaughlin got the best of the start from the outside of the front row, the Penske Ford comfortably out-dragging pole-sitter van Gisbergen into the first corner.

The reigning champion seemed to have the measure of the Red Bull Holden over the first stint, too, leading the way until a Lap 13 Safety Car sparked the first round of stops.

Triple Eight were slightly faster in the lane, however, van Gisbergen taking on around 1s less fuel but grabbing the lead in the process.

The Kiwi then had the pace to cover off McLaughlin's minor fuel advantage, building a 5s cushion across the second stint.

But while the Holden driver re-joined with a healthy lead, it quickly emerged that he'd fallen short of the required 120-litre fuel drop.

The costly error meant van Gisbergen had to make a third stop on Lap 68, which dumped him back to fourth.

He did have new rubber and third placed Waters in sight, however quickly relayed concerns about his front right suspension over the radio.

Those concerns were realised with three laps to go, van Gisbergen forced out of a race he could have so easily won.

All the while it was smooth sailing for McLaughlin, who cruised to a first win of the 2020 season.

"Full credit to Shane and his team, they really should've won that race," said the Shell Ford driver.

"They had the faster car, so I'll take it. We've got to take the luck when we can."

Mostert took his first podium as a Holden driver thanks to some sharp strategic work from his WAU crew.

The team opted to go for a long-fill during his first stop during the Safety Car, which resigned him to a second stint running at the back end of the Top 10.

However a significantly shorter second stop saw him jump the likes of Waters, Will Davison, Lee Holdsworth and Jamie Whincup to pop out in third – which then became second thanks to the van Gisbergen issue.

Waters completed the podium, despite his second stint going a lap longer than planned after he locked up on the way into the lane and missed pit entry.

He then had to momentarily fend of van Gisbergen before the suspension failure – the pair reuniting on the cool-down lap as Waters gave his Kiwi rival a lift back to the pits.

Waters was followed home by Tickford teammate Davison, while Whincup and Holdsworth – who both opted for early stops – finished fifth and sixth.

Nick Percat was seventh, with David Reynolds eighth after recovering from an early drive-through penalty.

The sanction came after he spun teammate Anton De Pasquale on the first lap, as part of a passing move gone wrong on Mark Winterbottom.

The Erebus clash was bad news for Scott Pye, too, the Team 18 driver clattering into the stranded #99 as part of the ensuing melee.