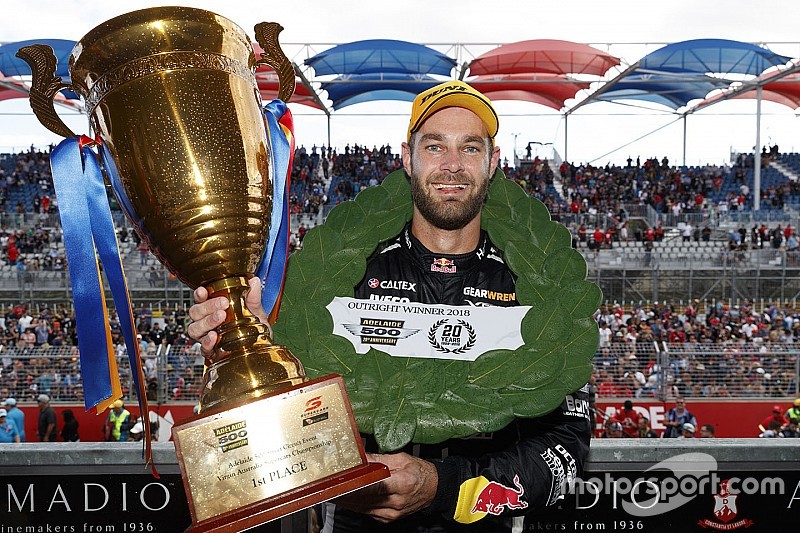 Shane van Gisbergen capped off a perfect weekend in Adelaide with a second win on Sunday, while title favourites Jamie Whincup and Scott McLaughlin both dropped points.

Van Gisbergen is now unbeaten in the South Australian capital across four races, backing up his doublewin in 2017 with another clean sweep this time around.

And with Whincup and McLaughlin both hitting trouble, van Gisbergen sits 42 points clear at the top of the standings after the opening round of the new season.

It was Whincup that made light work of the first stint and a bit of the 250-kay race, building a 10-second lead over the first 25 laps as McLaughlin and van Gisbergen scrapped over second place.

Whincup's day looked like it was going to get even easier when a front-right puncture took McLaughlin out of the lead battle pack on Lap 26, and unscheduled stop dropping the Penske Ford outside the Top 20 and seemingly giving the Red Bulls a free kick at running away with the race.

Just five laps later, however, Whincup hit troubles of his own. Rising gearbox temperatures finally caught up with his brand new ZB Commodore, the reigning champion limping back to the pits for his first DNF since 2013.

That left Saturday race winner van Gisbergen out front, but the race was hardly done. David Reynolds looked to turn an impressive second stint into a play for the lead around the second stops, running three laps later than van Gisbergen and managing to sneak back out ahead on Lap 45.

But Reynolds' time at the front didn't last long, van Gisbergen making use of his warmer tyres to charge back on into the lead on that very same lap.

After dropping back to second Reynolds was able to hold on to van Gisbergen, while Garth Tander – who like Reynolds drifted into contention across the second stint – shadowed the top two as well.

But while they could hang on, neither made a genuine play for the lead. In the end van Gisbergen came home 0.8s clear of Reynolds, Tander dropping back to more than 3.5s off the winner.

"I love Adelaide, that was just awesome," said van Gisbergen.

"We went the wrong way with our set-up and had to battle it out there. Davey was really quick and I expected him to battle me back.

"I can’t thank the team enough, it’s an awesome debut for the new Commodore."

Chaz Mostert and Cam Waters finished fourth and fifth, but it wasn't all good news for the Tickford squad.

Mark Winterbottom had been in the mix for a good result of his own, sitting fourth as the second stops shook out. However on Lap 57 he was stung with a drive-through penalty for excessive kerb use, a decision that infuriated Tickford boss Tim Edwards.

“Well they make you cringe, particularly because he’s been conservatively driving around it and watching the cars in front drive over it," he said. "So it’s bullshit, it’s absolute bullshit.

"If anyone actually bothered to look at the television screen, they’d actually see that."

McLaughlin rounded out the Top 10 thanks to a sharp recovery from his mid-race puncture.

"It was going to be an awesome battle I think, we were really sizing them up there and unfortunately we popped a tyre," said McLaughlin. "I think it was a bolt or something on the track that we unfortunately hit. It’s just one of those things.

"But we caught the leaders by 15-odd seconds, so we’re stoked.

"One day I’m going to get this Adelaide 500 right and get two days in a row, because at the moment I’m half job Harry."