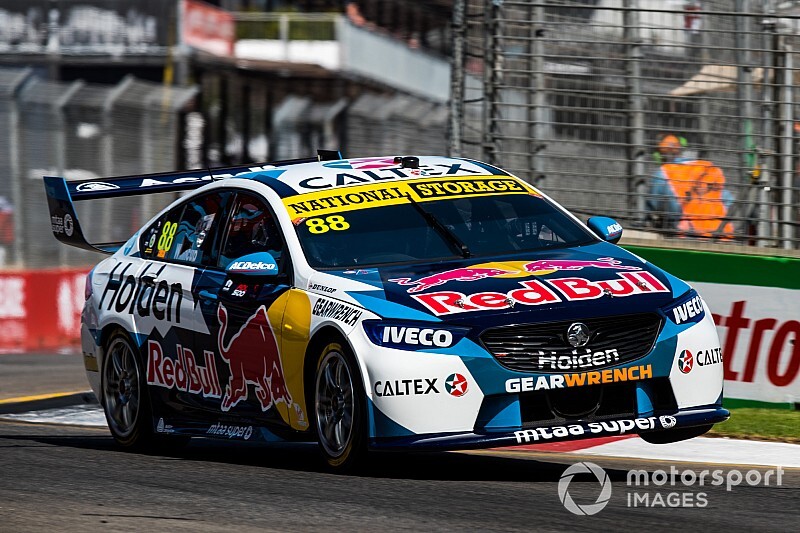 Jamie Whincup beat Scott McLaughlin and Shane van Gisbergen to victory in the opening leg of the Adelaide 500.

Fresh from putting his retirement on hold, Whincup was in vintage form on the streets of the South Australian capital.

He comfortably led a one-three for the factory Holden squad in what's been a tough week for the famous brand, Ford hero Scott McLaughlin splitting the two works Commodores with a well-crafted second place.

It's effectively back-to-back wins for Whincup, who won the final race of 2019 at Newcastle last November.

The pole-sitter led through the first stint, although he did spend the opening half a dozen laps under pressure from David Reynolds.

As the stint wore on Whincup took control, the gap blowing out to around five seconds before Reynolds made his first stop on Lap 23.

Whincup followed suit three laps later, however he didn't return in the race lead. That went to Scott McLaughlin, who, after running in seventh for the first seven laps, opted for a very early stop and a lot of clean-air running.

The reigning champion ran a long middle stint, his second stop not until Lap 42. Whincup, who needed to take on less fuel, waited another five laps, predictably taking back over the lead.

With some help from an out-of-sync Scott Pye, van Gisbergen was then able to close right up on the back of the #17 Penske Ford with around 20 laps to go.

But while van Gisbergen could shadow McLaughlin, there was no way through. McLaughlin managed to split the two factory Holdens at the finish, as Whincup cruised to a 5s win.

"I had a rocket today, the car was excellent," Whincup said.

"These [DJR Team Penske] boys are fast, but obviously we had track position, we were up the road a little bit.

"I've got to dedicate this one to Holden, it's been a bloody tough week for everyone involved and it's great to get a win.

"We got smoked by the other brand here last year, so it's nice to bounce back."

Reynolds slipped backed to fourth by the finish, followed by Davison, Waters and Mostert. The two Tickford Mustangs and the ex-Tickford-turned-Holden driver were inseparable for much of the race, including some panel-rubbing around the stops.

Fabian Coulthard was 10th ahead of Lee Holdsworth and Andre Heimgartner, leaving Jack Le Brocq as the only Mustang outside of the top 12, the Tickford debutant finishing 16th.

Meanwhile it was a tough introduction to the category for the new Team Sydney squad, Chris Pither the best-placed of the two cars in 19th.

The lead car only made it to the 18th lap, James Courtney slapping the Turn 8 wall right after making his first stop.

Nick Percat's season got off to the worst possible start, his Brad Jones Racing Commodore suffering a steering rack failure on the warm-up lap. He tried to take the start anyway, but took refuge down an escape road after a handful of corners.

He did get going again 10-odd laps later, but lost another three laps on his way to being classified 22nd.