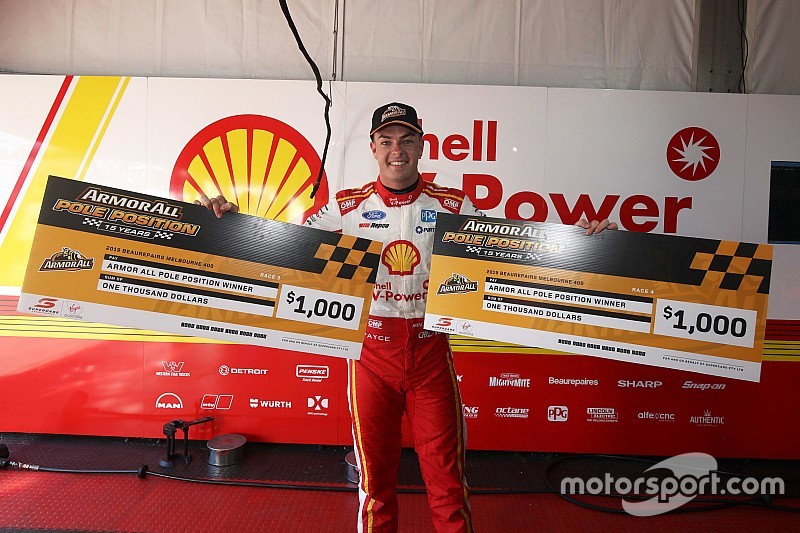 Scott McLaughlin smashed the Albert Park lap record on the way to taking the first two Supercars pole positions on offer for the weekend.

Between the short 10-minute duration of each session and the long lap, both hit-outs were effectively single-lap shootouts.

McLaughlin was clearly the class of the field in the first of those single-lap dashes, a lap record-breaking 1m53.828s – the first ever time under 1m54s – comfortably securing Race 1 pole.

DJR Team Penske teammate Fabian Coulthard was a distant three-tenths behind in second, followed by an all-Tickford second row made up of Cam Waters and Will Davison.

The biggest shock in the first session was Chaz Mostert, who ended up way down in 22nd. The Tickford driver needed to gamble on running later in the session than the rest of the field thanks to a kerb infringement on his first run, and then pinched a brake into Turn 1 and ran wide second time around.

McLaughlin couldn't quite replicate his Hollywood number in the second session, however a 1m54.264s was still good enough for Race 2 pole.

“The driver needs a big tune-up after that second lap, I just made a mistake,” said the reigning series champion.

“It wasn’t my best lap by any means. I had a really good first sector and half a good second sector, I was lucky to hold on in that last sector.

“I need turn. I’m battling. I’m loose as well though, so a bit of both.

“I’m just wheeling the thing and when the number pops up a 53.8 I’m fist-pumping. It’s a good start.”

Mostert recovered from his first session blunder to qualify second for Race 2, his time just 0.01s off McLaughlin's, while Whincup spoilt the Mustang party with the third quickest time.

Cam Waters was fourth, while Fabian Coulthard needed two cracks at a lap to grab the inside of the third row alongside Tickford's Will Davison.

The Race 3 and Race 4 grids will be determined by two more 10-minute qualifying sessions tomorrow.