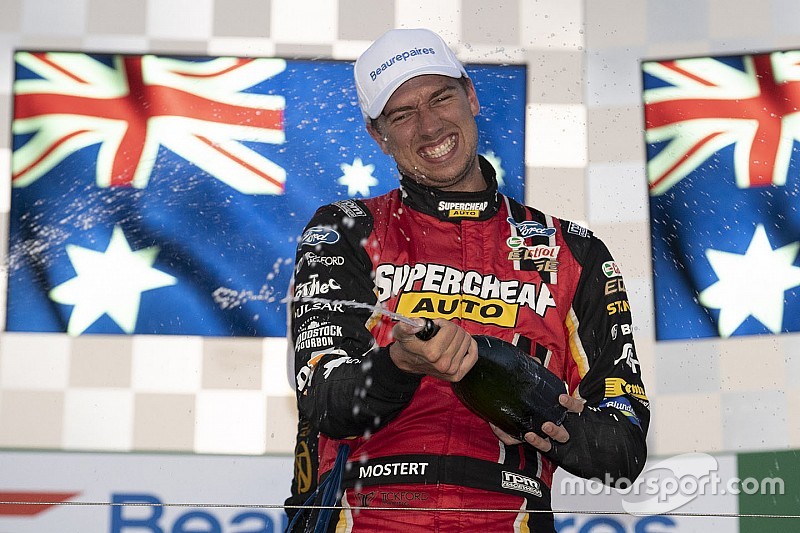 The front row was wiped out by a bizarre warm-up lap clash, with neither points leader McLaughlin or Waters making the start thanks to the damage.

McLaughlin – starting from pole and looking for a fifth-consecutive win – was smashed in the right-rear by Waters, who thought he'd been sighted by the Kiwi while trying to get past.

The shunt left the front row free and gave the Brad Jones Racing Holdens of Tim Slade and Nick Percat clean air on the run to Turn 1.

The drama didn't stop there. Jamie Whincup split the BJR cars on the run to Turn 1, before taking the lead from Slade later in the lap. In the process of losing the lead Slade also managed to run Percat off the road, dumping him back to seventh.

As the first stint wore on Whincup eased away at the front, as Slade found himself with mirrors full of Mostert.

On Lap 10 Mostert decided to try the undercut on Slade and made his stop.

Whincup followed suit a lap later with a 3.5s lead, while Slade opted to stay out until Lap 13.

Pitting that lap before Whincup helped Mostert close up on the effective leader as the second stint kicked off, and on Lap 14 the Tickford driver slid past the Red Bull Holden to take over at the front.

Slade, meanwhile, resumed around 6s behind the new leader on those younger tyres.

There was a scare for Mostert in the form of a Lap 20 Safety Car, called to retrieve a wheel that parted ways with Shane van Gisbergen's Red Bull Holden.

That gave Slade a sniff on his better rubber, however a sluggish Lap 22 restart for Whincup allowed Mostert to break away, setting up a 1.2s win.

"I really love this track and the boys gave me a great car," Mostert said.

"I really used the warm tyre [after the stop] to my advantage. I knew [Whincup] was still trying to get it up.

"I was just one lap in front of him where my tyre was at, so I really picked the best spot that I could, just got him... and like the first stint behind Sladey and J-Dub, the car in front is the quicker one.

"I was really happy to get the pass done and get the win for the boys."

Whincup held on to second, with Slade, David Reynolds and Fabian Coulthard not far behind.

Scott Pye came home sixth ahead of Will Davison and James Courtney, Percat finished ninth after that early bump from Slade, and Andre Heimgartner led the way for Nissan in 10th.

Van Gisbergen's miserable weekend continued with a 22nd place finish thanks to that lost wheel five laps from the end.

Following yesterday's engine failure, the Kiwi looked set to make up some points after running an overcut strategy and finding himself at the back end of the Top 10 with good tyre condition for the run home.

However that was undone by the rogue right-rear, which required a pair of trips through the lane before he limped to the end.